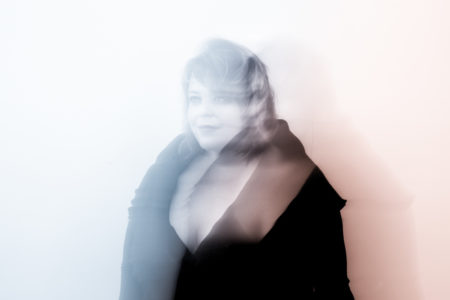 “Shannon Webb-Campbell is a mixed Indigenous (Mi’kmaq) settler poet, writer, and critic. She is the author of Still No Word (2015), recipient of Eagle Canada’s Out in Print Award, and I Am A Body of Land (2019; finalist for the A.M. Klein Prize for Poetry). Shannon holds an MFA in Creative Writing from the University of British Columbia, and a MA in English Literature at Memorial University of Newfoundland and Labrador, and is pursuing her Ph.D. at the University of New Brunswick in the Department of English. She is the editor of Visual Arts News Magazine. Shannon is a member of Qalipu Mi’kmaq First Nation and lives in Kijpuktuk/Halifax in Mi’kma’ki.”

As a teenager, I used to write hundreds of letters to pen pals all over the world. Most people I used to write to I had never met. By nature, I am deeply curious and seek out connection.

Becoming a writer seemed like a natural progression for what’s become a life-long desire and burning need to express, respond and relate.

I remember writing a poem in grade school in a special bound notebook that I illustrated.

I worked at a children’s bookstore in high school and read voraciously. Then I became a journalist, and worked as an arts writer for alternative weeklies and magazines while studying literature at Dalhousie University. I swore I would never go to grad school, but a few years later, I ended up doing my MFA in Creative Writing at University of British Columbia. I wrote and published my first poetry book, Still No Word, and worked for a few publishers, and literary publications reviewing and interviewing authors and poets.

Then I started teaching English at Memorial University, but couldn’t go further without a doctoral degree, so I ended up doing a MA in English, where I wrote some of what eventually became I Am a Body of Land. Currently, I am working on my PhD in Creative Writing at the University of New Brunswick and writing my first novel, Only Young.

Lunar Tides is structured within the lunar calendar, and explores the primordial connections between love, grief, and water. The poetics follow rhythms of the body, the tides, the moon, and long, deep familial relationships that are both personal and ancestral. The book began with the deep grief of losing my mother, and charts the arc to finding her again in the waves. It explores the legacies of colonialism, kinship and Indigenous resurgence.

I am working on Only Young, a novel consisting of interlinking narratives taking place between Newfoundland’s 1949 Confederation with Canada and 2011 Toronto, Ontario when the Qalipu Mi’kmaq First Nation Band was officially recognized by the federal government. The novel will examine these events and the narratives surrounding them via the protagonist – Sarah’s exploration of both the colonial constructions of her identity, and her larger family relationship to her ancestral lands and body.

This novel asks: Who belongs, and where? Are we the sum of our family narratives? Who are when we’ve been estranged from our family, and ultimately, our ancestors? How do our familial and personal mythologies address colonization?  What is love and how do we undo harm? Can a personal story transform collective trauma? Only Young deals with physical migration in search of work, alienation, homesickness, trauma, notions of belonging to the land, and illustrates that resettlement ruptures family connections.

Shannon will be featured (virtually) at this year’s Word On The Street festival Sunday June 12th from 4-5 PM.