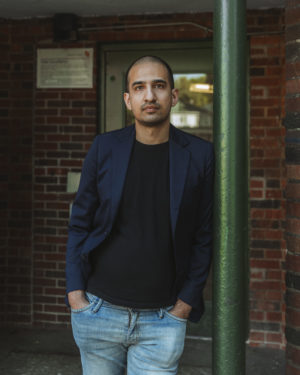 “H.N. Khan is a first-time author. Born in Pakistan, he immigrated to Canada at age seven and grew up in Regent Park, a low-income community housing project. After graduating with a business degree he decided to drop out of law school to pursue a career in Toronto’s start-up scene. Since then, he’s helped build and market software that’s used by millions around the world. He is a recent graduate from Humber’s School for Writers’ correspondence program”.

From the age of 13, I’d kept a journal and wrote tons and tons poetry all throughout high school but it wasn’t until my gr. 12 Writer’s Craft course that I discovered my love for writing fiction. It was hard, like really hard, but I always remember the year-end assignment consisting of a short story that took me so long to get write, but when I read it out loud in class, everyone was so moved. Once I discovered the power of words to do that to people,  I just knew, someday I’d write more words that did just that.

One of the first things I ever wrote was a memoir piece about being a 5-year at my paternal grandfather’s funeral. I was his favourite grandchild and we had a really special bond than one day I just remember being in our ancestral village back in Pakistan and this giant procession of happening in this open-front yard of our family home. Death is grieved differently back home, there’s a lot of expectation on the grieving family to tend to sometimes the hundreds of guests coming in from the neighbouring villages. There was this busyness all around me and some how, I’d felt forgotten through it all and left to console myself. It was that feeling that I was trying to express in that short piece.

I think of it as trial by fire, just draft after draft after draft until whatever it is I’m working on is worth putting out. There’s always a kernel of something worth pursuing in early drafts and then it’s vital to get feedback from the right people. When I got back in touch with my gr. 12 writer’s craft teacher with the first draft of what became Wrong Side of the Court his words were, “it has potential, but your writing needs serious work.”

He convinced me to sign up for a graduate certificate program at Humber where I was mentored by Tim Wyn-Jones, a giant in the children’s book market in Canada and it completely changed the trajectory of my work. I try and run everything by him now.

I LOVE Jhumpa Lahiri, her writing, oof, there’s something lyrical, soothing, and just simultaneously heart-breaking about her work. Unaccustomed Earth by her is up there for me.

I would describe my work as energetic, lyrical, and intimate.

I hammer out the first draft as fast as humanely possible, without giving much thought to anything outside of general story structure principles. I then do a personal edit and get into something that I’m comfortable sharing. And then it’s a game of ping pong (notes and revision) between early readers, then once I think it’s ready for my agent’s eyes, the same game of ping pong with her until it’s finally ready to be pitched.

Wrong Side of the Court is my debut novel, a labour of love, and a means for me to make sense of my early teenage years growing up in Regent Park, a housing project in the heart of Toronto through the eyes of Fawad, the protagonist of the story. Basketball was my first love in many respects, and I tried to write a love letter to the sport disguised as a coming-of-age story of a teen trying to straddle multiple identities and trying to make sense of the many contradictions that come with being an immigrant growing up in a housing project going to a school where the primary student body is far more privileged and trying to convince your mother that arranged marriages just aren’t your thing.

My agent is currently pitching an adult RomCom that’s a Bollywood spin on Crazy Rich Asians. And I’m currently working on a TV adaptation for Wrong Side of the Court, the pilot, the pitch deck and the whole nine yards with the awesome team at The Rights Factory which we’re hoping to start getting out there this summer and starting the conversations that could lead to bringing Wrong Side of the Court to the small screen. Stay tuned.

H.N. Khan will be appearing at WOTS Saturday June 11 from 1:30 – 2:30 PM EST on the “Great Books” Stage.  This can also be streamed online live at youtube.com/c/TheWordOnTheStreetToronto