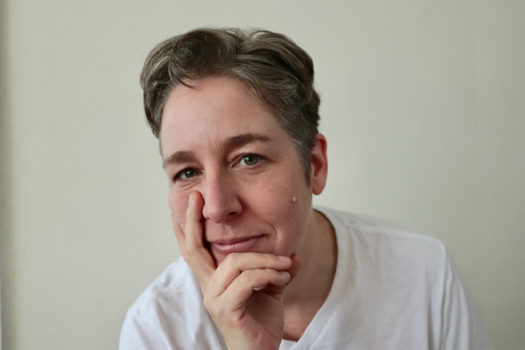 “Charlie Petch (they/them, he/him) is a disabled/queer/transmasculine multidisciplinary artist who resides in Tkaronto/Toronto. A poet, playwright, librettist, musician, lighting designer, and host, Petch was the 2017 Poet of Honour for speakNORTH national festival, winner of the Golden Beret lifetime achievement in spoken word with The League of Canadian Poets (2020), and founder of Hot Damn it’s a Queer Slam. Petch is a touring performer, as well as a mentor and workshop facilitator. Their debut poetry collection, Why I Was Late (Brick Books), won the 2022 ReLit Award, and was named “Best of 2021” by The Walrus. Their film with Opera QTO, Medusa’s Children, is launching in June 2022. They have been featured on the CBC’s q, the Toronto International Festival of Authors, and were longlisted for the CBC Poetry Prize in 2021.”

I knew as a kid that I wanted to write. As soon as I could read, I was writing little stories and what might be interpreted as prose, or very bad but earnest poetry.

The first thing I remember writing was a murder mystery (that was really easy to solve if you can believe a ventriloquist dummy was mistaken for a partner in crime). I had one of those pens that had 4 different colours inside of it, so I used it for the different characters in the story.

I develop my skills by practicing writing and also believing that fiction, theatre, poetry, and prose don’t need definite forms.

The first time I realized I could write however I wanted, was when I found a copy of Breakfast of Champions by Kurt Vonnegut at a bait and tackle shop when I was just 13. When I read it, found satire, I found a non-linear timeline that worked against everything I’d been told about how to craft a story and this book became my biggest influence for freedom in creation. Years later I let my drummer tattoo one of the pictures of an asshole (from the book) into my armpit. I was attempting to cross reference a David Cronenberg film.

For poetry I would have to cite the work of Audre Lorde, Libby Scheier, and Dorthy Parker, for their brave and honest work that sometimes dances with satire.

My work is compassionate, political, satirical, and defies form. It is accessible in language, and sometimes tricks the reader into accepting new perspectives by breaking down their own walls with absurdity and comedy. When asked for a short description, I usually say – I write poetry for garage mechanics.

It depends on the project. For bigger theatre projects I will brainstorm, write things out on little cards, do pictures, create atmospheric music to become a background. I will pin these up to the wall in a sort of grid of wire and twine and stare at it a lot. I have a near daily writing practice of writing a poem first thing in the morning, before my ADD brain gets to full with the day.

Currently I’d working on two manuscripts, one called Poetic Monologues and another that is all about top surgery, which would be in collaboration with Emmie Tsumura. I’m also working on “A show for us guys” with Lemontree Creations, which will push the forms of hybrid theatre and Instagram live as a platform. Finally I’m reworking my script No one’s special at the hot dog cart for further exploration after a workshop with Theatre Passe Muraille.