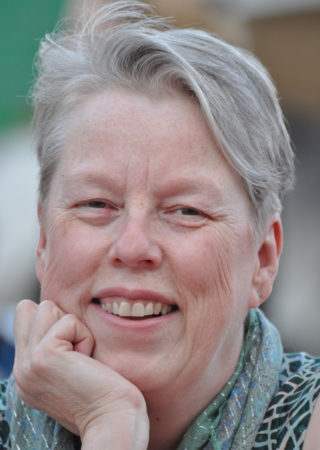 “Candas Jane Dorsey is an internationally-known, award-winning author of several novels, four poetry books; several anthologies edited/co-edited, and numerous published stories, poems, reviews, and critical essays. Her most recent fiction includes novels The Adventures of Isabel; What’s the Matter with Mary Jane?; and The Man Who Wasn’t There; and short fiction Vanilla and Other Stories and ICE and Other Stories. For fourteen years, she was the editor/publisher of the literary press, The Books Collective, including River Books and, for a time, Tesseract Books. She was founding president of SFCanada, and has been president of the Writers Guild of Alberta. She has received a variety of awards and honours for her books and short fiction, including most recently, the 2017 the WGA Golden Pen Award for Lifetime Achievement in the Literary Arts. She was inducted into the City of Edmonton Arts and Cultural Hall of Fame in 2019. She is also a community activist, advocate and leader who has served on many community boards and committees for working for neighbourhoods, heritage, social planning and human rights advocacy. She lives in Edmonton, Alberta”.

I am told I was always a writer, even as a kid. I first realised the power of writing when I was about eleven, in grade school, and enjoyed making poems and stories. From there, it became My Thing, and by high school I was well set on the path, and had written things like the school play as well as some decent poetry, and a couple of weird stories that I do remember fondly even though they were subjectively awful, because they taught me some things about writing that I needed to know.

That was probably pretty early in life, so no, not really. I do remember some of my “juvenalia” but I really hope no-one else does! It was pretty awful, though well-punctuated.

I just kept writing. And reading, of course. But writing. Getting critiques, responding, eliminating some of my self-indulgences, but just keeping at it. W.O. Mitchell was a teacher and mentor of mine, and I remember him saying, “Kid, ya didn’t quit!” and grinning at me. That was his best praise: ya didn’t quit.

There are too many influences to list. I love to read and at my best (I’ve slowed down as I got older!) I could read several books a day, for entertainment. I liked spending more time in a better book, too. I remember books that were special to me as a kid and teenager, and they weren’t books most people know about: Crab Village by Julia Clark and The Kissing Man by George Elliot, both fantasy/magic-realism. A number of speculative writers (Ursula K. LeGuin, Samuel R. Delany, Joanna Russ, Elizabeth Lynn, Élisabeth Vonarburg, Judith Merril) have been very important to me. Jill Paton Walsh’s A Chance Child is still the exemplary of kids’/YA for me–it’s a stunning book. I have always loved to read mysteries and particularly Sarah Smith, Laurie King. S.J. Rozan, for contemporary writers, and among others Margery Allingham and Dorothy Sayers for what we might call Golden Age. I also like the sturdy effectiveness of some old-school writers like Nevil Shute and Jane Duncan, whom I read when I was a kid; I suspect that they had a hand in teaching me to tell a story in an additive way.

I think writers are the worst people to describe our work. We either overthink it or underrate it! I write what seems to need to be written at the time. That’s the best I can say.

Whenever I can manage to show up at the page, I type some stuff. Usually the story isn’t in chronological order when I write it, and I move it around after the first draft material is on the page. In more recent years, I experimented with writing novels in order, starting with Chapter One and ending with The End, and that was …shall we say, interesting. It worked. My recent mysteries and the YA I’m talking about at WOTS this year were all written more or less in order from start to finish. I think it depends a lot on the voice I’m hearing when I start to write. Sometimes the person has a straightforward tale to tell, and sometimes it’s more twisty and episodic. I’ve been writing for a long time and I’ve learned to trust myself to respond to the voice with the type of writing I need to do it justice.

I’m in the unusual position of having several books out in a very short time. Two are mysteries that bring a sardonic modern voice to traditional tropes (the nameless detective, the noir streets, etc.). They’re titled The Adventures of Isabel and What’s the Matter with Mary Jane? and the latter has just won a Crime Writers of Canada award for Best Traditional Mystery, despite its very non-traditional heroine. I’ve really enjoyed seeing the positive response to them. There is at least one more in the series that will come out next year.

The book that brings me to Word on the Street this year, however, is called The Story of My Life, Ongoing, by CS Cobb and it’s a young adult book from the point of view of an intersex teen named Corey. It’s not a problem novel about that kid, because being intersex is not a problem, but Corey makes a friend who really does have a big problem, and together they work on solving it. I heard Corey’s voice, almost literally, dictating a book report about the kind of books they hate, and from that grew an epistolary novel told in book reports, e-mails, letters, and transcripts. Corey is a wonderful person, and I made sure to check with an intersex activist to see if I’d made any mistakes, but Corey’s identity was very clear to me from the start.

One of the ways I cope with any writer’s resistance is to have several things on the go, so I’ve got a book on writing, a collection of non-fiction, some children’s picture books, and I’m trying to decide if my nameless sleuth has any more stories to tell.

Candas Jane Dorsey will be appearing virtually at Word On The Street Saturday June 11 at Noon.