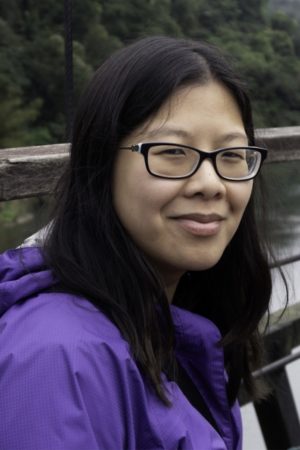 “Judy I. Lin, #1 New York Times-bestselling author of the Book of Tea duology (A Magic Steeped in Poison and A Venom Dark and Sweet), was born in Taiwan and immigrated to Canada with her family at a young age. She grew up with her nose in a book and loved to escape to imaginary worlds. She now works as an occupational therapist and still spends her nights dreaming up imaginary worlds of her own. She lives on the Canadian prairies with her husband and daughters”.

After my family immigrated to Canada, I always found solace in writing. It was a way for me to process my thoughts and work on my grasp of the English language. I wrote poems, journal entries, and short stories, but never thought being a writer was a possible career path until my language arts teacher in junior high read one of my stories. She encouraged me to pursue publication. Even though I never committed to it until many years later, that encouragement always remained with me as a dream for the future.

I completed my first “novel” when I was twelve years old. It was a portal fantasy with magic and adventure and swords. I drew my own cover for it and bound it myself! I have fond memories of it still, knowing that it was what started it all.

I took a break from writing after I graduated from university as I was establishing my career. I actually started writing again due to video games and fanfiction. I was drawn back into storytelling because I played story driven video games such as Mass Effect and Dragon Age. It inspired me to write and play around in those worlds. The process of dedicating time to writing, giving and receiving feedback, and then completing those stories, were all part of developing my craft. It built the foundation for writing my original work. After that, I participated in mentorship programs, both as a mentee and a mentor. Working closely with other authors who are just as passionate about writing and stories definitely helped me level up my skills.

I am influenced by many amazing Asian fantasy authors who paved the way for A Magic Steeped in Poison to find an audience. Cindy Pon (Silver Phoenix) and Malinda Lo’s (Huntress) books were some of the first Chinese inspired fantasy books that I saw on the shelves. I also loved the Ember quartet by Sabaa Tahir and The Star-Touched Queen by Roshani Chokshi. Descendant of the Crane by Joan He is one of my favorite books of all time, and I will pick up any book she writes.

My hope is that readers who pick up my stories find a world they could be fully immersed in, as if they are living in it alongside my characters. A world filled with magic, folklore, art, food all inspired by Taiwanese culture and Chinese history, but reimagined playfully.

I always start with worldbuilding, because it is difficult for me to write without the background in place. I am a planner so one of my favorite parts of writing is that initial burst of inspiration as I’m working on the outline and envisioning the twists and turns of the story. I then try to step into the mindset of my main character by doing a quick draft where I’m seeing the world through their eyes. I then complete many rounds of revisions while working with my editor to flesh out the subplots and character arcs.

A Magic Steeped in Poison is the story of Ning, a reluctant practitioner of tea magic. She accidentally causes the death of her mother by pouring her poisoned tea, and travels to the capital to participate in a magical tea competition to try and save her dying sister. In the palace, she finds back-stabbing competitors, encounters a mysterious stranger with murky intentions, and must survive the grueling competition rounds in order to make it back home alive.

The sequel to A Magic Steeped in Poison will be out in August of this year: A Venom Dark and Sweet. It will conclude Ning’s story and finish out The Book of Tea duology.

I have another Chinese-inspired fantasy in the works though! It will not be set in the same world as The Book of Tea duology, but it’s still a story that will have lots of magic and mayhem.