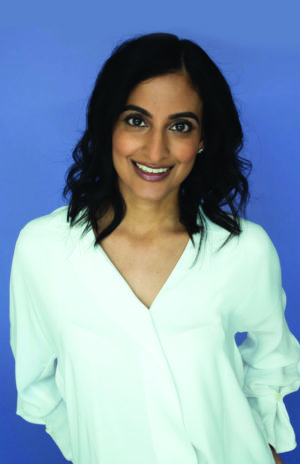 “Amita Parikh received an honours BSc from the University of Toronto before moving to London, England, where she completed the Curtis Brown creative writing course and the Royal Court Theatre’s writers’ program. She works in the tech industry and produces and hosts a podcast dedicated to women in sports. The Circus Train is her first novel.”

I never wanted to ‘be’ a writer. Writing is something I do, alongside a number of other pursuits I find interesting—it’s not who I am. I’m very careful about not tying my identity to any one job. I’m grateful for the opportunities that have come my way as a result of my career as an author, but it’s a tenuous business, one that is largely based on public opinion. I decided early on that having a clear mental demarcation between how I view myself and how the public views me was crucial to my wellbeing.

But in terms of when did I know I liked writing? Well, I enjoyed it from a young age. I liked the freedom that came with it, each page was like a blank canvas from which I could let my imagination run wild.

I didn’t decide to write a novel until about 9 years ago. I did a lot of writing before that—journalism, screenplays, tv pilots, playwriting. I wrote one short story and thought it would end up in The New Yorker (spoiler alert, it’s not there). I was throwing spaghetti at the wall, seeing what would stick. At the same time, I’ve always had full-time jobs because no one pays you to sit around creating.

Then one day I got super serious about novels and it was like a switch flipped. I said ‘Ok, I’m doing this and I’m not stopping till it’s published.’ And that was it. If I want something….look, I know so much of publishing is based on luck—but I am persistent beyond belief and I just knew that I wasn’t going to quit until I got published.

I do, it was a book, and I was in Grade 2. The teacher told us to write a story in our notebooks—you remember those notebooks where half the page was blank for drawing and the rest was lined for writing? I think the teacher only expected a few pages. Of course, I filled up the whole thing and then had to staple extra sheets to the back because my story was so long. It was about a bunch of adventurers on a ship and I illustrated the entire book as well. Absolute definition of ‘Understood the assignment—and then some’.

A lot of consistent, boring practice. I don’t have an arts degree, I did a combo of reading books on writing from the library and I took a very practical fiction writing course. I also think all the screenwriting and playwriting I’ve done has helped. You can learn a lot about plot structure and dialogue from those mediums.

There was no overnight success on my part. No magic bullet—just consistent, mundane work. That’s not what anyone wants to hear, right? Everybody wants to go to heaven, but nobody wants to die. But old-fashioned, basic work, where you’re making incremental improvements each day is, I think, the secret to becoming great at anything. If you can find joy in doing boring work for a long time (I’m talking decades), then you have a decent chance of finding success.

Too many to name! I love Michael Chabon, I think I mention him in every interview I do. My favourite book is The Amazing Adventures of Kavalier and Clay. I also love Phillip Pullman. The His Dark Materials trilogy is my favourite set of fantasy novels.

Growing up, I read a lot of fiction written by South Asian authors (Kiran Desai, Rohinton Mistry, Jhumpa Lahiri, Vikram Seth are just a few that I love), but I ended up writing in a different genre. I also love Zadie Smith and Chimamanda Ngozi Adichie. I read fairly widely, which is one of the most important things you can do as an author. Sometimes I get the feeling that non-literary fiction is frowned upon, but I think it’s important to read as much as you can. I love comedic writing, crime novels and YA thrillers just as much as literary fiction. Two of my favourite comedy writers are Sukh Ojla and Nina Stibbe. I also read a lot of non-fiction, mostly about sports, science, and hip-hop music and culture. One of my favourite non-fiction authors is David Epstein, who wrote The Sports Gene. I also loved The Cartiers: The Untold Story of the Family Behind the Jewelry Empire by Francesca Cartier Brickell.

I tend to rotate between three books at once. I’m currently reading Book Lovers by Emily Henry, Future Luxe: What’s Ahead for the Business of Luxury by Erwan Rambourg and Bedroom Rapper: Cadence Weapon on Hip-Hop, Resistance and Surviving the Music Industry by Rollie Pemberton.

I’m fairly analytical and process-oriented. I have a very mathematical mind and think best in terms of numbers. When it comes to writing new books, I’ll usually start with a bigger idea and then add in a few characters and plot out the main conflict and the wants and needs of the main characters. I also always have to know how a book starts and how it ends before I begin writing it.

Once I’ve done this, I take a spreadsheet and work backwards from a word count. If the book is going to be about 90,000 words, I’ll say ‘Ok, Chapter 1 is going to be 0-1517 words’. And then in the next cell, I have the main thing that happens in the chapter. I do this for every chapter. And then I sit down and I start writing and I follow the word count for each chapter as best I can. Inevitably things change during the writing process — that’s the beauty of it — but I always have a spreadsheet with my calculations.

So that’s the main process but of course there is so much more than that. Especially with historical fiction, the sheer amount of research we undertake is alarming. Research is something I need to be more disciplined about. It’s hard though, because I’ll go to a museum with the intention of learning about one thing and five hours later, I’ve gone down a rabbit hole into something else.

The Circus Train is my debut novel. It’s about a young girl whose life is flipped upside down after she rescues a mysterious stowaway onboard a luxurious circus train that criss-crosses Europe during the Second World War. It’s out now in Canada and Italy and will be out in the UK, US, ANZ and a bunch of other places later this year. It’s also secured a number of foreign rights deals, which is hugely exciting. One of my favourite parts of being an author is seeing the ways in which different countries interpret the cover. I think my favourite part is hearing from readers all over the world, though. It’s very touching.

My focus at the moment is finishing my second novel. It’s historical fiction with a fantastical, magical twist. It’s set between Paris and New York and it has been nothing short of a joy to work on. I have a couple other manuscripts and an exciting theatre project in the works as well, but I can’t say more about those at this time.

Amita can be seen live at Word On The Street on Saturday June 11 from 6 to 7 PM. This event will be streamed online.