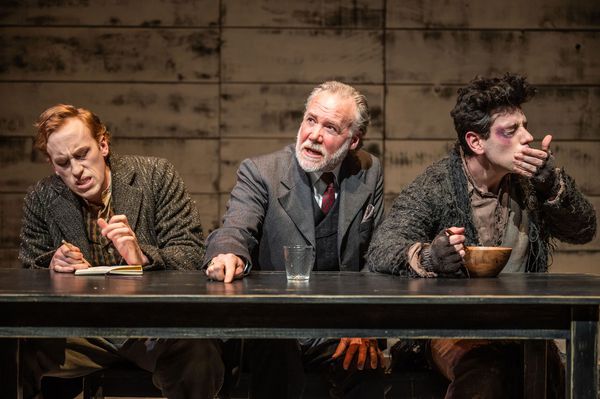 Orphans For The Czar, written by George F.Walker, directed by Tanja Jacobs and produced by Crow’s Theatre, is a funny, insightful exploration of class, revolution, and the privilege that exists in both of those things. It is a production that is supported by performances with excellent comedic timing, chemistry and rhythm but also encounters issues of a disjointed narrative and interesting ideas that are not fully explored.

The year is 1905 in Russia, and it is a powder keg fit for revolution, fueled by starvation, inequality, economic collapse, and a overall desire to burn down the status quo. Our story follows multiple orphans as they navigate the revolution, adult figures who either provide guidance or exploit them, and their own desire for survival. Our story first follows Vasley (Paolo Santalucia) an orphan defined by his cynicism and a prime example of one who has been beaten into submission by the world. His journey takes him from this village to a bookstore in St. Petersburg run by the Master (Eric Peterson also playing another mentor figure Piotr) where through encounters with other revolutionaries and state-controlled police, he morphs from cynical orphan to hardened survivor who finds his own agency. Along the way he meets secret police who seek his submission through different means: a calculating but also exhausted Makarov (Patrick McManus) and a hot headed and dangerous young officer Sasha (Kyle Gatehouse). He also connects with revolutionary sisters Olga (Michelle Mohammed) and Maya (Shauna Thompson). There is also people from his village Yakov (Christopher Allen) and Rayisha (Shayla Brown) who join in a journey of survival. Praise must go out to the entire cast who navigate their respective journeys with excellent timing, chemistry and rhythm that moves the dialogue and action at a nice pace where everything is clear but doesn’t feel like it’s dragging, taking appropriate moments to pause when needed. Director Tanja Jacobs has crafted a journey that is 90 minutes long but moves at such a nice pace the time flies by.

Set design by Lorenzo Savoini makes an effective use of the stage, utilizing the concept of books but also the bareness of walls to drive forward the setting of desperation, escapism and survival these characters are in. George F Walker’s writing succeeds in giving us multiple compelling perspectives on revolution and how class plays a part in it. Whether it is the desperate need for survival as seen in Yakov and Valsey, or the class privilege and how it effects on how one perceives others like Maya and Olga. There is a multi faceted narrative occurring here, that is done a disservice but how quickly it goes by. We don’t get to see how class privilege in revolution is truly confronted to its fully extent or even how those living with disabilities are affected by revolution as examples of what else could be discovered and explored. There are many interesting ideas that are introduced but could benefit by further exploration. This critic founds himself at times wishing for themes and storylines to be explored further beyond the simple piece of exposition text.

This is a production that does well to tackle complex issues with humor, heart, hit and chemistry. It finds itself in a place to benefit from more exploration but is an engaging and enjoyable journey into class and revolution, nonetheless. It is the little things in this production that brings joy, from the back and forth dialogue to the small moments when the poorest characters of the piece, show that in in even the smallest of ways they still have strength.