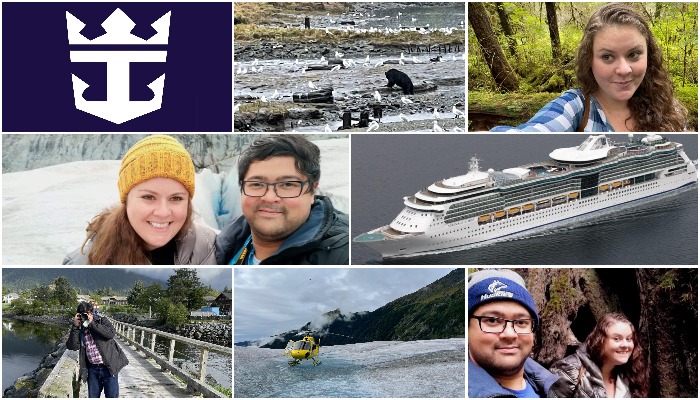 Alaska via Royal Caribbean, Part 1: Can We Really Cruise During Covid?

I fell in love while trapped in my apartment. The Covid-19 lockdowns began a little over two months into my relationship and immediately 100% of our dates shifted to my 770 square foot apartment. My essential worker boyfriend came and went and gradually moved in while I stayed put in my little box on the 28th floor for over a year, not daring to go much of anywhere until I was vaccinated less I somehow catch something, give it to him, and see him pass it on to someone in the at-risk population with which he works.

In our many (many many) conversations on the topic, Phil and I have reached a tentative consensus that the pandemic was, on the whole, a blessing in disguise for our relationship. It fast-tracked us through the awkward (and expensive) ‘going out’ portion of courting and straight to the far more appealing and productive ‘casually hanging out in a private space and talking for hours’ part. It forced us to prioritize each other and make sacrifices in order to still be able to safely see each other. But it also meant that our relationship lacked real world scope and lived experience. We got engaged having barely ever stepped out of our apartment together, let alone left the country.

By April 2021, around the time I’d finally been booked for my first shot, I was starting to lose my mind. I’d watched more than 600 TV shows in the past year and rearranged the furniture three times, perpetually seeking the change of scenery that was so against the rules. Now that I was finally on track for the vaccine, something had to change. I couldn’t remember the last time I’d gone so long without travelling, and I was desperate to get Phil out into the world after learning his childhood trips to his grandmother’s family home in England were the only travelling he’d ever done. With the goal of one day getting him comfortable enough to venture as far as the Philippines, I knew we had to start our travel adventures as soon as possible.

We talked through all the risks and guidelines for travel amidst the pandemic and made a very important, very personal decision about our comfort level once we were both fully vaxxed. Trusting the data on vaccine efficacy, particularly against serious illness, and the success of safety procedures at Phil’s workplace, we decided to not be afraid anymore. I don’t have the strongest lungs so I’d spent the better part of a year living in absolute terror of catching Covid but with my risk of hospitalization reduced drastically with my Pfizer/Moderna cocktail, I knew easing up was ultimately the best choice for my anxiety-prone mental health. We would follow every single rule that was still in place, because they’re in place for a reason, and take the most cautious route whenever faced with a choice, but we were going back out into the world, to whatever extent we were allowed.

We decided to travel in September, at the end of the summer rush when kids would be back in school (at least virtually) and prices would be dropping for the shoulder season. The decision of where to go came together pretty quickly. Alaska was one of just a few places on both of our must-see lists, and it seemed like the safest bet considering the continuing unpredictability of global circumstances. We liked that most activities would be outside and naturally distanced, and we liked the security of staying on our own continent just in case anything did go seriously wrong. Plus, it felt like a good intro-to-travel idea for my reticent fiancé. The trip would take him to a country he’d never visited but a climate that feels familiar. There’s a sense of adventure to visiting Alaska because it’s so remote but culturally it’s just the United States so the fear of culture/language/will-my-phone-work-here barriers is non-existent.

Alaska also meant introducing Phil to cruising, the most user-friendly way to go anywhere. If you’re even a little intimidated by travel, a cruise offers really useful structure that helps facilitate experiencing new places. The set itinerary will allow you to sample an array of different places without having to commit to staying in any one in particular. The ship is your comfortable home base so if you venture ashore and find yourself overwhelmed, underwhelmed, ill, or just not feeling it for whatever reason, you can simply turn back. Obviously, the trade off is usually that you can never truly get to know any of the places you’re travelling to, you’re in each port for far too little time. But cruising is a fantastic way to try out an area and decide if you want to go back.

I cruised Asia in 2019 so now I know that I want to return to Seoul and Kyoto but Beijing is really not my jam. I can book longer stays in Korea and Japan next time now that I have my bearings. I also cannot say enough about the freedom of walking around without any luggage because you unpack once and leave everything but your day bag behind when you reach port. I have an almost obsessive hangup about looking like a tourist so to me there’s a great thrill to wandering around a new place with just a purse and a travel mug (Phil has no such hangup and would often give me away with his giant camera and backpack).

Alaska is a famous cruise location for a reason. Not only is the scenery when sailing absolutely breathtaking but it’s a place that’s best experienced with multiple short stops rather than one long stay in a particular city. Many of the activities and attractions cater specifically to cruise ship passengers and there isn’t enough to do in any one place to justify staying much longer than we did in each port. There are two basic cruise options for Alaska: the roundtrip Inside Passage (the one we took), which departs from Seattle or Vancouver and tours you to three or four cities and to view a major glacier, or the Cross Gulf which sails one way all the way up to Anchorage with more specialized stops along the way. Having really enjoyed the more intro-level version, I could definitely see us returning to Alaska to try the other route someday. But then I think that’s enough. We really feel like we’ve experienced the state even though a cruise usually feels more like a sampler platter. More so than any other location I can think of, Alaska is best experienced via cruise.

We researched all the cruises heading to Alaska in September, 2021 and found that pretty much every line had an option or multiple. Not sure where to start, we checked out some reviews of various ships but we quickly determined that most online cruise reviewers care about really stupid things (dissing a ship because they have limited specialty dining restaurants seemed like crazy priorities to us). We ultimately decided we didn’t care that much about the ship itself, choosing to treat the actual cruise part of cruising as a facilitator of our vacation rather than the heart of the vacation. We cared more about itinerary, filtering our results to make sure we found a cruise that included Sitka because Phil was interested in its Russian history. We cross-checked each company’s Covid protocols and double checked to make sure they had vaccine mandates in place but, beyond that, the decision really came down to price. We looked at some of the big fancy ships but ultimately decided to go without the bells and whistles to instead focus on affordability so that we’d have plenty of money in the budget to pay for big ticket excursions we knew we wanted.

The answer ended up being a 7-Night Round Trip on Royal Caribbean’s Serenade of the Seas, one of the line’s older and smaller ships and therefore one of the best prices you’re ever going to find for an Alaskan cruise. We booked a guaranteed inside cabin at a Covid-promotion discount price and paid only $1141 CAD each (a call to Royal Caribbean’s customer service after a small price adjustment a few months later earned us a bit of extra spending money in the form of onboard credit).

You can usually sail to Alaska out of Vancouver, which appealed to us because domestic flights are so much cheaper, but Canada’s ports were all still closed at the time of booking so every cruise was leaving from Seattle. This lead to a series of stupid mistakes wherein we thought we could fly to Vancouver and take a ferry down before realizing that the land border and the sea border are the same thing and if we didn’t fly straight into Seattle we risked Biden not opening those borders on time to let us through. We settled on flying in and out of Seattle directly with a one-night hotel stay on our way there, just in case.

I know what you’re thinking- cruises aren’t exactly known for healthy social distancing and now is really not the time. But we actually found that now (or, Sept 2021 to be exact) was the perfect time. I’m really crowd-averse so the actual on-ship part of cruising can be stressful but, when we went to Alaska, the industry was slowly getting back on its feet so we were thrilled to find that the ship was only hosting 35% of its usual capacity. We’d chosen an older, smaller ship to begin with because we didn’t need Go-Karts in order to enjoy the mountain views and the price is so much more accessible on the older ships. So, at only 35%, we were dealing with only a thousand or so other passengers, if that. The ship was full enough to never appear ghostly but we never once waited in a line or couldn’t find a seat (well, we did have to share once, at Harry Potter Trivia, but that’s because half the tables were cordoned off for social distancing and they’d underestimated the millennial population of the ship). Masks were required everywhere except at your dinner table or in a few adults-only lounges (the only un-vaxxed passengers allowed on board were children under 12 but, since we were sailing during school time, there were only about 5 of them on the whole ship) and a very simple and efficient sign system was implemented to signal which tables were sanitized and safely distanced. The SeaPass system made for contact-limited payments and doubled as a capacity counter and contract tracing tool. Even as anxious, cautious people really stepping out for the first time in the pandemic, we could not have felt more safe.

At the end of the cruise, we were provided free and easy PCR tests to help us get back home. To the best of our knowledge, not a single passenger got sick during our time in Alaska.

I spent 18 months breathing the same air day in and day out in my tiny downtown apartment, barely seeing a soul except this one guy who went from new boyfriend to future husband while the rest of my world waited outside. Once we were fully vaxxed, with plenty of research and preparation and tests and masks and caution, we decided to breathe. And the air in Alaska, boy, that’s pretty much the best air there is.

Stay tuned for Parts 2 & 3 of my series on our Alaskan Couple’s Cruise.