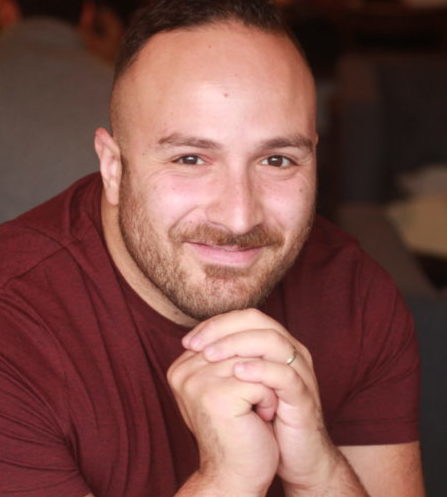 “Hasan Namir is an Iraqi Canadian author who graduated from Simon Fraser University with a BA in English, and received the Ying Chen Creative Writing Student Award. He is the author of God in Pink (2015), which won the Lambda Literary Award for Best Gay Fiction and was chosen as one of the Top 100 Books of 2015 by the Globe and Mail. His work has also been featured on Huffington Post, Shaw TV, Airbnb, and in the film God in Pink: A Documentary. In 2019, his poetry book War/Torn (Book*Hug Press) received acclaim, and he was recently named a writer to watch by CBC Books. Hasan lives with his husband, Tarn Khare, in Vancouver, and they are proud parents of a baby named Malek. Hasan loves TV, film, and Arabic music. He speaks Arabic and English fluently.”

When did you know you wanted to be a writer?
I wanted to be a writer since I was like 6 years old. I was still living in Iraq and I never really got a chance to write anything in Arabic because in 1993, I didn’t have the resources to write. Plus, I had the worst handwriting so it wasn’t possible to hand-write a story. However, I always had these story ideas in my head. When I moved to Canada in 1998, I loved reading so much that I wanted to write my own stories. My aunt was a murder mystery novel writer and my grandfather was a poet. So writing was in my blood.

Yes, my first short story is called “Linton Street Stop” and I wrote this when I was 12 years old and it was published as part of an anthology of young writers.

I was mostly self-taught growing up. I read a lot of books by R.L. Stine, Agatha Christie, I read a lot of Nancy Drew books. From grade 9-11, I wrote a lot of horror short stories and would read them to my classmates. I was interested in writing crime stories. When I was in grade 12, I took a Writing 12 course and I had to write a novel in one month as part of Nanowrimo in November. I wrote a novel about the diary of a serial killer. I entered a horror story contest for the Coquitlam Centre School Library horror contest during Halloween. Though my story didn’t win, I definitely knew I wanted to continue writing. It was my passion. I then graduated from high school and attended Simon Fraser University. I majored in English Literature and I took every writing course possible out there. The first course I took was English 472 with my mentor Jordan Scott, who is an incredible author and a poet. The prerequisite to take the course was English 372, but I didn’t take that course at the time. So I emailed Jordan and sent him some poems. He took me in but he warned me that this class would challenge me. I enjoyed the course so much and my final project ended up being my published poetry book War/Torn (Book*Hug Press). I was always awarded the Ying Chen Creative Writing Student award that year. I ended up taking English 372 with Jacqueline Turner, who is a wonderful poet and author as well. She helped me with my manuscript God in Pink which ended up being published also with Arsenal Pulp Press. It was the first book that was published for me.

James Baldwin’s Giovanni’s Room is not only one of my favorite books, it was also one of my biggest inspirations. My writing has also been inspired by William Shakespeare and his plays such as Romeo & Juliet & Macbeth & A Midsummer Night’s Dream. I was also inspired by Jack Kerouac and his novel On the Road was quite remarkable and definitely a huge inspiration. Jordan Scott is my inspiration as he was the one that told me to think outside the box and pushed me out of my comfort zone in terms of form. As such, both my poetry book War/Torn and my novel God in Pink played with form and challenged the traditional way of storytelling.

My work is often complex in terms of form and may not always be accessible because like my identity and body, it’s not easy to understand. There are always conflicting identities in my work where the poetic narrator or the protagonists of my story deal with issues such as sexuality and sexual orientation against religion, culture, traditions. As an Iraqi-Canadian, I feel that I’m the hyphen in between my two cultures. I speak Arabic and English fluently so at times, so I’m trying to embrace both of my cultures and languages and at times, there is struggle with it. I think my work reflects that. Often, the characters struggle with being “othered”, being outsiders from the rest of the communities that they are part of. They don’t feel that they belong, so they are often lonely, and their journey lies in searching for love, wanting to be understood and accepted for who they are.

I tend to write usually in the mornings and the evenings. I usually would have my coffee and I would start writing on my Macbook Pro laptop.  When I’m working on a project, I will focus on that project only and then once I’m done then I will work on the next one. I don’t shuffle between projects at a time because I feel that each project deserves my full-time attention and I put my heart and soul into it. It’s the only thing I think about. Once it’s done, then I will start a new writing project.

The Name I Call Myself is my most recent book. It’s a children’s book published by Arsenal Pulp Press, with illustrations by Cathryn John. It’s about a young nonbinary person navigating their way in a world that’s focused on binaries and conformity. It’s been an incredible collaboration and everyone who worked on this book had so much passion and creativity.

I recently finished a poetry book called Umbilical Cord which will be published by Book*Hug Press in 2022. I’m currently working on a novel called Love Mutilated and I’ll be working on a few more children’s books manuscripts.