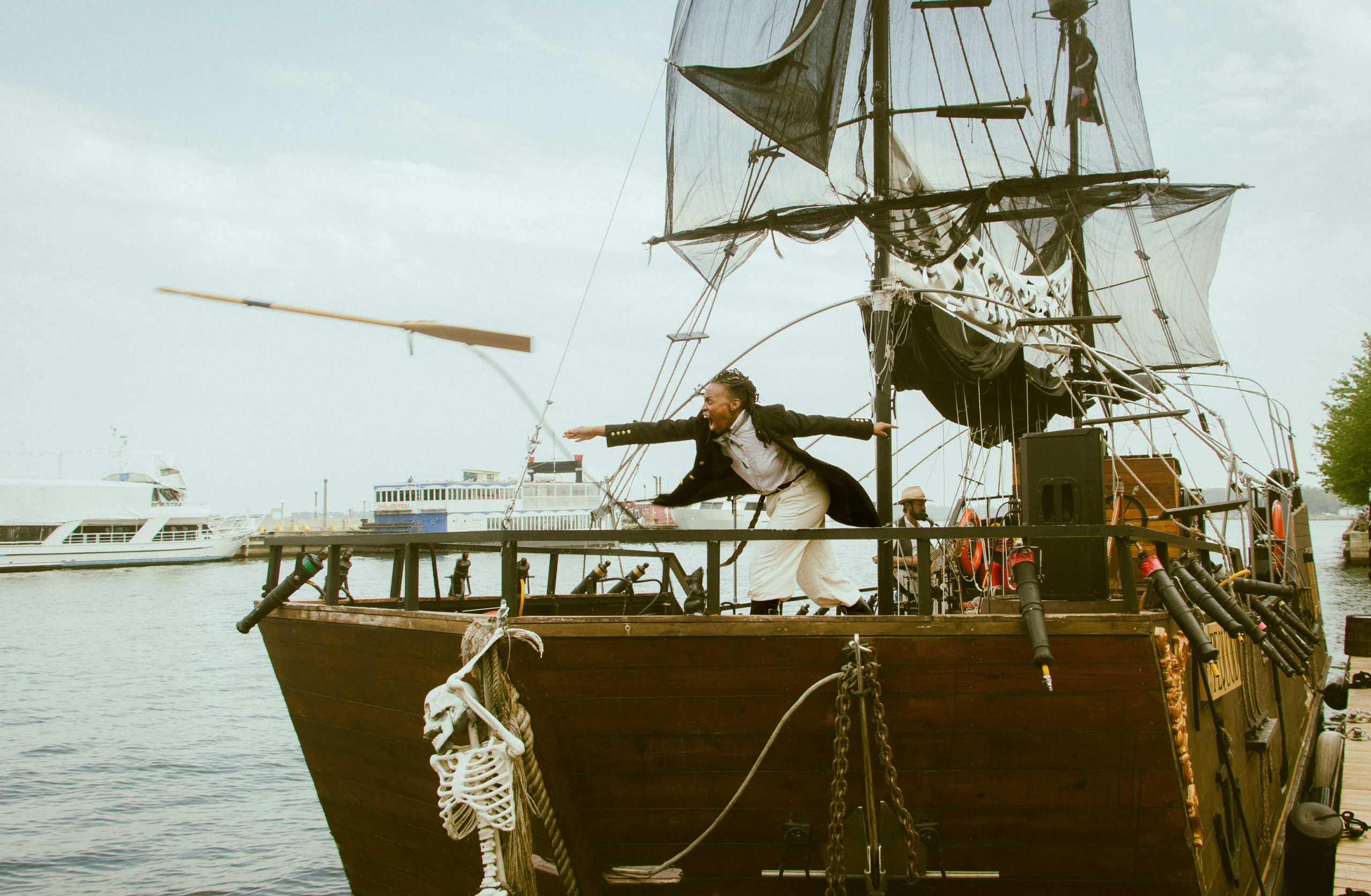 MOBY: A Whale of A Tale

MOBY: A Whale of A Tale is a musical adaptation of Herman Melville’s haunting story of Captain Ahab and his notorious nemesis Moby Dick. The show runs September 16-26 dockside at 585 Queen’s Quay West, at the Pirate Life boat dock with a run time of 1h 15 minutes. MOBY is a family friendly show created for audiences 5+.

I attended the preview show on September 16th with my six year old son as my plus one. This was my first assignment since the March 2020 lockdown that shuttered many performance venues across the city, so it was with much anticipation and excitement that we headed over to the open-air waterfront venue. Pirate Life Toronto has been adapting the use of their ship for performance opportunities throughout the summer, and their set up for MOBY: A Whale of A Tale felt both innovative for the particular needs of live performance at this time, while also feeling well attuned to the nuances of the story being told. The site specificity of watching a story set on the high seas play out aboard a pirate ship docked in Toronto’s Inner Harbour provided an intensified sensorial experience. When my balance shifted as the dock swayed with the waves, or the brisk breeze raised goosebumps on my arms it was in concert with the action unfolding just a few feet from my Muskoka chair, and the waxing moon rising over the course of the production added a romantic backdrop to an achingly beautiful conclusion.

The action begins with new recruit Ishmael (Annie Tuma) trying to talk her way onto the whaling vessel Pequod, naive and confident she is undeterred by first mate Starbuck’s (Lena Maripuu) scoffs and attempts to scare her off. We soon meet the experienced whaler Queequeg (Jamar Adams-Thompson) whose cheerful bravado wins over Starbuck while he befriends Ishmael and states that he will only join the vessel if Ishmael is also accepted onto the crew. While the crewmates settle into their new roles their friendship becomes a grounding anchor as uncertainty hangs over the ship’s mission. Rumours begin to circulate about Captain Ahab (Amaka Umeh) who has yet to be seen by us or the shipmates, but whose reputation casts a sense of foreboding over both the ship and audience. The music and live performance of Moonfruits (Kaitlin Milroy and Alex Millaira) enhances the emotionally resonant performances of the crew with ballads and sea shanties that drive the story forward—so it is with much anticipation that Ahab emerges from her quarters and demands Starbuck assemble the crew before her.

Theatre–good theatre–makes us feel something. My young son felt a mix of emotions so big that it overwhelmed him. As the tension built and the characters were warned of their impending meeting with the formidable Captain Ahab, his discomfort began to build as well. When Ahab revealed herself to give a speech equal parts rousing and chilling to her crew in preparation for the dangerously vengeful whale hunt, he was overcome with what he later told me were his two emotions’, excitement and anxiousness. I pulled him into my lap and tried to sooth him with platitudes, this isn’t real, the actors are just telling a story, this is just a tense moment… but my attempt to explain away the full body experience he was having was unsurprisingly ineffective and at his request we left (escaped?) from the audience. He hasn’t yet gained the experience to know that if you are able to white knuckle through the dramatic tension, there is a cathartic release waiting on the other side.

I have heard motherhood described as having your heart walking around outside of your body, and perhaps this becomes a liability when your external heart accompanies you on assignment to emotionally provocative theatre. After a debrief and a rescue from his dad and little brother, I returned on my own to experience the end of the show. I rejoined as Ahab was on the cusp of a redemptive moment, seeking humanity through an intimate conversation with Starbuck, questioning the vengeful motivation of her life and wondering if a quest for the warmth of simple home comforts would ultimately be the most fulfilling. Alas, there is no happy ending here as the fated reunion between the Captain and her foe unfolds with sudden and disastrous action. A dramatic crescendo, a boat out of control, a desperate attempt, and shipmates overboard. In the end a final monologue imbued with the nostalgia of intimacies and bonds forged through the hardships of an adventurous life leaves me feeling contemplative and a bit teary. Director Alexandra Montagnese caught me as I was leaving the venue, she expressed concern for my son and asked if he had experienced the play as too scary. I shared that I didn’t think it was fear that he had experienced, rather it might have been a deeply empathetic response to the mounting tension and a fully immersive investment in the characters’ stories (which did happen to be scary) that sent us out of the venue. MOBY is haunting, and a stunningly beautiful production. This show does what one hopes theatre will do, transports you outside of your own lived experience through transformative storytelling while providing an opportunity to experience aspects of the human condition in all of its raw emotional potential.