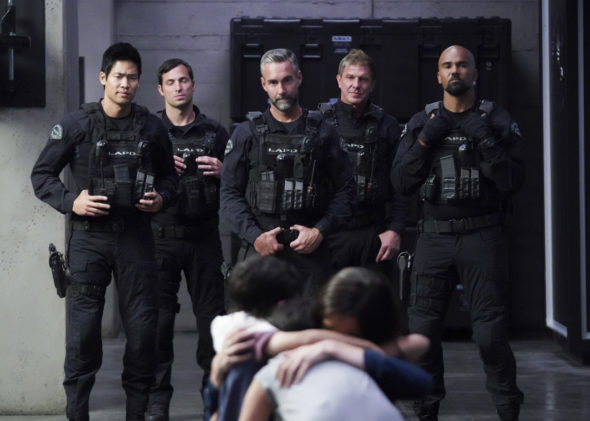 In light of all the mandatory sitting at home by ourselves that’s happening right now, I decided to try something I’ve never done before: I actually watched all those cookie cutter crime shows that TV networks renew for decades on end and grandmas watch during daytime reruns for some reason. I often say I “watch everything on network TV except the acronym shows” well NOT TODAY! I tried my hand at one episode each of all the network procedurals on my dvr. Below is my official report on SWAT.

I got really lucky with this one. I’ve seen SWAT before and remember it being pretty bland, mostly in that I barely remember it at all. But the episode I caught for this project was actually really good so I found myself focusing on the show’s positives (it’s got a sleeker, more professionally shot look than most of its procedural comrades) rather than its negatives (it has one of the least engaging ensembles of personality-less law enforcement droids that I’ve encountered throughout Procedural Watch, and that’s really saying something). It’s a very grey show with lots of intense testosterone-y energy and remarkably little by way of personal storytelling or character development (there were two ongoing personal subplots that got nods in this episode and I got nothing out of either of them) but baked very usefully into the show’s premise is the highest of high stakes and nothing is as useful to a procedural television show than organic high stakes.

Episode 406 “Hopeless Sinner” is all about a predatory religious leader and the young people lured into his dangerous community. SWAT doesn’t strike me as the kind of show that’s prone to greater meaning but this storyline had that sneaky “there might be a useful social message here if you’re open to it *hint hint*” quality that I really enjoy in a show mostly watched by ageing white Republicans (I’m guessing, but c’mon). The plot rollicked along (holla at those high stakes!) and a superbly scary guest performance from Sean Patrick Thomas as the leader of the central cult of personality made up for the general lack of personality elsewhere in the show. The fact that this is one of the only times I’ve seen Sean Patrick Thomas since his iconically swoon-worthy performance in Save the Last Dance that forever lives in the hearts of my entire generation, well, that’s just something I’ll have to sort out in my nightmares.

With any of these monster-of-the-week shows, it’s always going to be a crapshoot whether you get an episode with an interesting focus and a strong guest performance. I got lucky this time but the lack of interesting permanent characters makes it impossible to vouch for any given episode of the series. I will say that, despite the overwhelming grey-ness, the show looks good with solid location stuff and just the right amount of frenetic camera work. And the dialogue is both written and performed believably so even if I don’t love the characters at least they don’t sound like they’re reading cliches off cue cards. I also think that, on the grand scale of law enforcement shows, SWAT vibes as one of the less toxic ones; they could use a few more female characters but this is a rare procedural with a non-white actor at the top of the call sheet (Shemar Moore) and, though the standard glorification is always a problem, there appears to at least be less outright sanctioned corruption than the beat cop shows. We’re grading on a curve here but, hey, baby steps.

SWAT‘s not bad. Or at least “Hopeless Sinner” was pretty good.