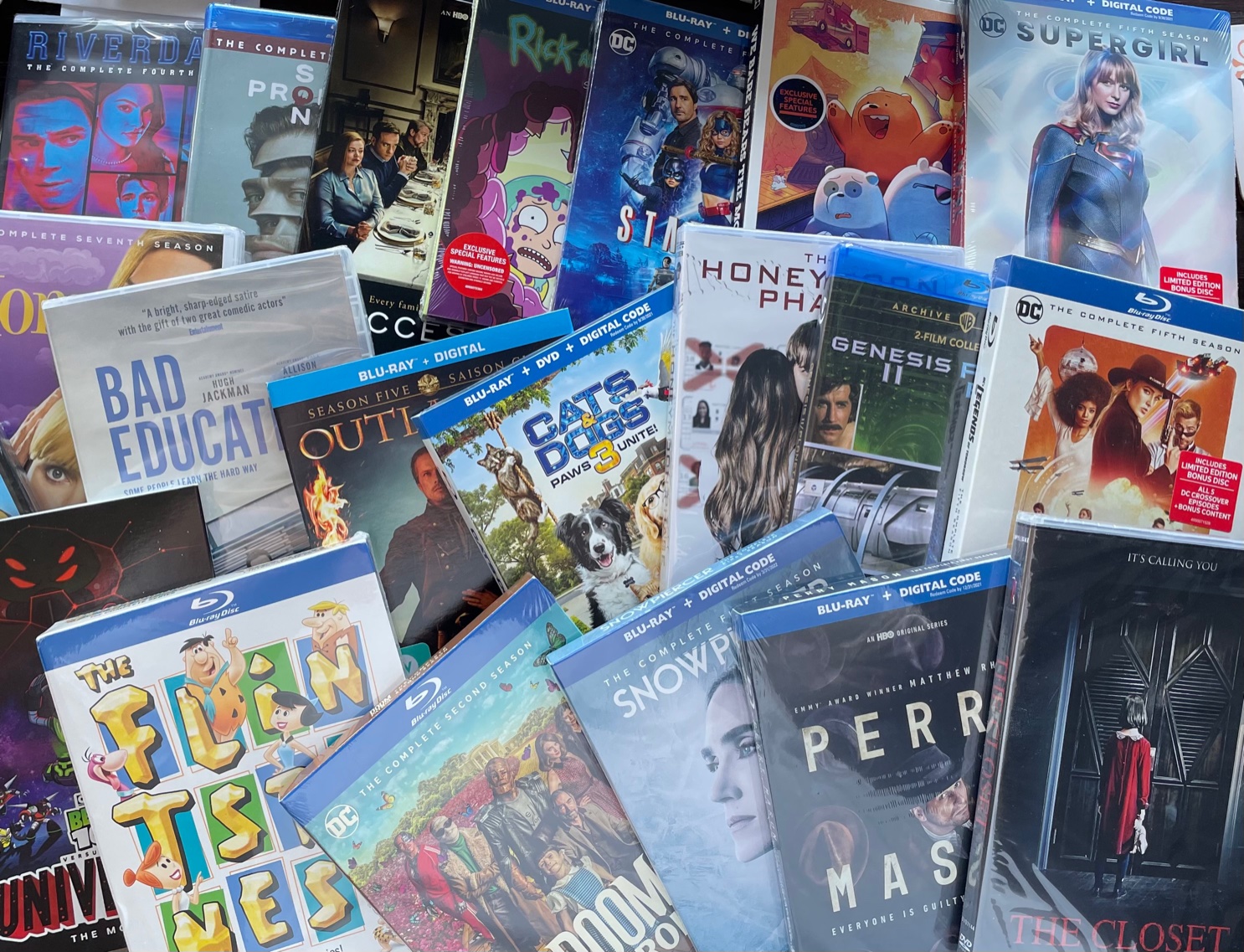 It’s time, once again, for the On DVD series featuring new releases from Warner Brothers, Dark Sky Films, and Sony Home Entertainment. They’ve provided us with free copies to review. All opinions are our own.

The movies released on DVD/Blu-ray from the above Home Entertainment companies run the gamut. Like, they could not be more different. You’ve got Bad Education from HBO, a black comedy true story starring the perfect duo of Allison Janey and Hugh Jackman. Then on the other end of the spectrum there’s the We Bare Bears movie, the feature extension of one of the cutest/sweetest/most endearing animated TV Shows of the modern era. Also in the kids space, you’ve got Ben 10 vs. The Universe: The Movie for a high octane alien-fighting adventure vibe, or Cats & Dogs 3: Paws Unite! (exclamation mark mandatory), an adorable live action comedy thriller about the oldest rivalry on earth.

Over in the horror space, Dark Sky’s got a contemporary sci-fi thriller called The Honeymoon Phase that will turn you against Alexa forever and a Korean mystery film called The Closet that is truly terrifying. For something a little less creepy but just as genre-tastic, a non-Trek Gene Roddenberry sci-fi saga (Genesis II and its sequel Planet Earth) is getting a double-bill release from Warner Bros on beautiful Blu-ray.

The biggest prize in the TV space in the past few months is The Flintstones, The Complete Series, an absolute must-have for any collector. It’s got all 166 episodes plus tons of extra content though watch out because apparently there’s a glitch on one of the discs in some of the sets so you may have to contact the company for a replacement if you draw the short straw. The other must-have in my opinion is Rick and Morty, The Complete Seasons 1-4 (The Complete Fourth Season is also available right now as a standalone but only buy that if you already have the other seasons) because the home entertainment releases of that mind-bending adult cartoon always feature the best special features on the market including bonus content for nearly every single episode in the set. If the kids need new content, you can always go to Green Eggs and Ham, The Complete First Season though if I’m being honest I don’t think the $20 pricetag for 13 episodes is worth it on this one even with such a killer voice cast. If you’re looking to bridge the kid-to-adult animation gap, Victor and Valentino: Folk Art Foes drops soon on dvd and it’s a little more sophisticated but still kid-friendly.

There’s not a lot from the mainstream networks to highlight here but Prodigal Son, The Complete First Season is a solid choice for an above-average network serial and I’ve always been a passive advocate for CBS’s sitcom that was sold as a show about mother-daughter relationships but is really about sobriety so if you can vibe with its somewhat tired sitcomishness, Mom, The Complete Seventh Season is a highlight of its kind and the last gasp of the mother-daughter era because season eight doesn’t have Anna Faris.

If you’re more into prestige cable stuff, the big prestige HBO title of recent years is now available Succession, The Complete Second Season as well as the starry limited series The Undoing and less splashy Perry Mason, The Complete First Season and Sony’s stalwart Outlander, The Complete Fifth Season. Netflix’s Snowpiercer, The Complete First Season is also getting a rare streaming-to-home-entertainment release so you can finally give the adaptation a shot because you know you didn’t watch it when it came out. On the pop-y side of things, there’s also the CW’s Riverdale, The Complete Fourth Season, which brings us to the segment of this post entitled “buy it if you watch it, otherwise ignore it”: Superheroes. The biggest chunk of related releases this season is DC television properties (Doom Patrol, The Complete Second Season; Legends of Tomorrow, The Complete Fifth Season; Stargirl, The Complete First Season; and Supergirl, The Complete Fifth Season). Generally speaking, I’ve always maintained that Marvel is better at the big screen but DC rules on the small one. Greg Berlanti’s interconnected superuniverse over on The CW has gotten a little unwieldy in the past couple years with the loss of Arrow and the addition of too many new things to keep track of but the shows all have a great, watchable tone and strong ensemble casts so you can pick and choose which to follow then do some key Wikipedia-ing to catch up for the yearly crossover events that are the single most epic scripted things to happen on TV. The Blu-ray sets might be just what you need if you want to follow along but they’re not necessary for general collectors; there’s a lot of them to keep track of so only invest if you’re invested.