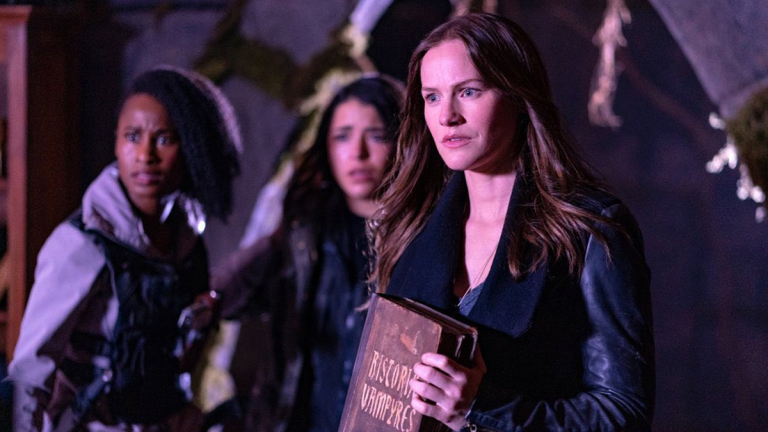 What fans can expect from the final season of Van Helsing

Filming of Van Helsing was affected by the coronavirus crisis this year, just like many series, leaving fans eagerly awaiting the release of new episodes.

Shooting wrapped up in September after resuming two months earlier but no date for broadcast has been confirmed by Syfy as viewers get more impatient for the return of their favorite show.

Kelly Overton and the rest of the cast will be back in the American-Canadian series – but what can fans expect from Van Helsing season five?

Details of the plot points that are coming up in series five have been kept firmly under wraps by showrunner Jonathan Walker, who took over the role from Neil LaBute after the third season.

It has been announced that there will be some new characters in the show, though. Among the actors who are set to feature in upcoming episodes include Sons of Anarchy’s Kim Coates and Ali Liebert from Bomb Girls, as well as Andromeda’s Steve Bacic.

Coates will be playing Count Dalibor, the husband of Olivia, while Liebert is slated to portray vampire Nina. Perhaps the most exciting addition to the cast is Bacic, though, whose wild vampire the Father is set to have a massive impact on the story.

It is also expected that season five will see a lot more of Overton, with the actress who plays Vanessa Van Helsing having to be written out of a lot of the previous series due to pregnancy.

Importantly, it was confirmed before filming even started that season five would be the last series of Van Helsing. That meant the show’s writers have been given the chance to wrap up the story on their own terms, which is not always the case in the dog-eat-dog world of television.

It was initially planned that Van Helsing season five would come out before the end of 2020, but production delays mean this is now not likely to be the case. A series debut at some point in the early months of 2021 appears to be on the cards instead.

Of course, Van Helsing is just the latest media to have been inspired by Dracula lore. As well as the 2004 film that starred Hugh Jackman and Kate Beckinsale, the fictional characters of the Van Helsing family have been used in a wide range of material, such as the Penny Dreadful TV show, which was arguably cancelled far too soon.

For example, there was a video game called The Incredible Adventures of Van Helsing, which came out on platforms including PlayStation 2, Xbox and even Game Boy Advance.

In the third-person shooter, Van Helsing hunts down Dracula in Transylvania. The game got some mixed reviews on its release, but it still found a loyal audience back in the day.

There is even a Van Helsing slot game which can be played at various online casinos in Canada, such as 7Bit Casino. Made by leading slots developer International Game Technology, the game – which is called Van Helsing’s Book of the Undead – will certainly appeal to fans of the Van Helsing stories.

Even with the current Van Helsing TV series coming to an end in the coming months, it has been suggested that a spin-off could be launched after the series has wrapped up.

This has already been done with series such as The Walking Dead to great effect, so Van Helsing fans will probably have plenty to look forward to in the future.

“I don’t want to jinx it,” said Jonathan Scarfe, the male lead actor who plays Axel and has also directed a handful of episodes of the new series of Van Helsing. “Never say never.”

Van Helsing fans will be hoping news about future VH series comes out sooner rather than later.