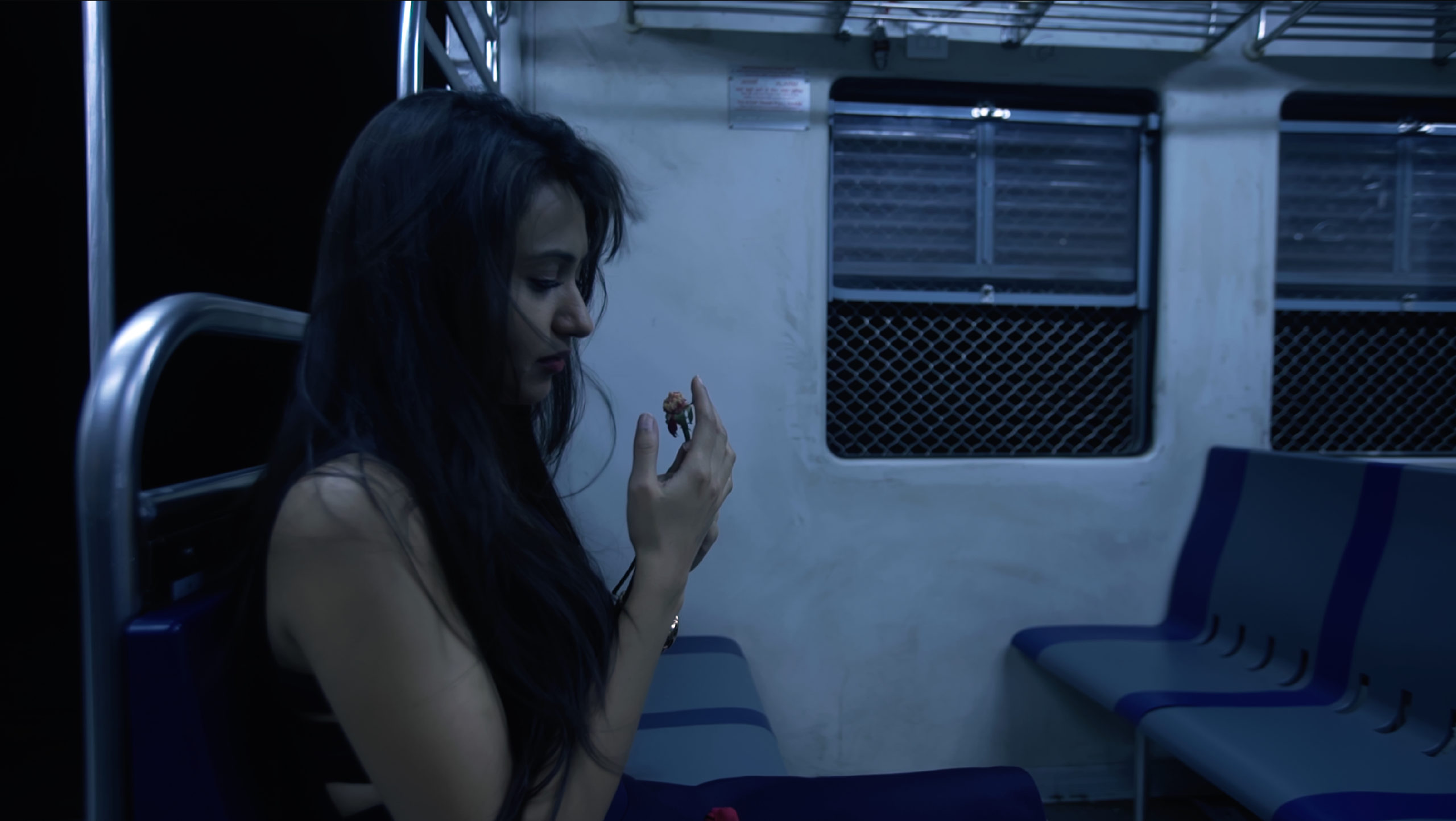 With so many film festivals changing their programming from in-person to virtual, it can make it difficult for viewers to access and be exposed to vibrant upcoming and established short filmmakers simply through word-of-mouth recommendations. I had the pleasure of being connected to filmmaker Tanmay Singh about her recent award winning film I am Vrinda, which premiered at the International Film Festival of South Asia, The International Peace Festival, and the upcoming Indian Film Festival Cincinnati. The film follows the main character Vrinda through a visually stunning festival landscape during Mumbai’s Ganesha Festival. Told through flashbacks, strong visuals, and voiceovers the audience discovers that the main character is plagued by brutal and violent murder of a loved one. Vrinda is being swallowed by grief and she must find some light in order to survive. I had the pleasure of speaking with Singh about this visual narrative film and about the decision to centre the film around the renowned Ganesha Festival.

Why did you decide to center the story around the Ganesha Festival?
Laura, if you ever come to Mumbai, please schedule it around the time of the Ganesha Festival. [The] Ganesha festival is the festival of festivals, where you have a combined carnival of Holi, Diwali, Colours, Fire Crackers, Sweets, Music, Devotion, Energy, Faith, Religion, [and] Ocean. It goes on for 11 days [and] it’s an amalgamation of so many positive elements that it needs to be experienced to be believed.

Besides being a religious festival, it also has social and historical significance. Indian freedom fighter and social reformer Lokmanya Tilak reinitiated the festival after it lost state patronage in the British-raj, and through the festival he united the masses and used it as an event for political activism and intellectual discourse.

Even today the festival is celebrated by all the religions with equal fervor in Mumbai, be it Hindu, Muslim, Sikh, or Christian. In that sense it’s also a symbol of India’s secularism and commitment to cultural and communal plurality. It was an apt backdrop for me to set my film in.

What sort of mood were you hoping to achieve in regards to the way the film was shot?
I wanted the film to look real and grand at the same time. Short films [can] look amateurish due to their poor production values. I knew this [wouldn’t] be the case with my film, if I [was] able to pull off shooting during a public festival. It had its own challenges but the raw energy, the festive ambience, and universe provided gave it the grandeur I wanted to achieve.

What was the process of filming these epic festival scenes?
We decided to shoot the film Gorilla style since it was supposed to be shot on the day of the Lord Ganesha festival which is really huge in Mumbai. It is not possible to replicate the same kind of energy, crowd, and enthusiasm if a filmmaker tries to recreate it on a normal day. A lot of big budget Hindi films have tried to recreate it, but as an audience member I could never feel the same kind of vibe watching it, even though they spent millions. It always looked a bit staged and fake. I was very clear that the film should be shot on the day of the festival itself. We started to shoot around 1 PM and ended by 1 o clock in the night.

At times due to the shot choices I felt like I was watching a documentary. What sorts of conversations did you have with the cinematographer in regards to the way you wanted the film to be shot?
Since I had made the decision of shooting Gorilla style, right at the inception of the movie, I knew it’s not possible to storyboard a lot of things. As we were shooting real Ganpati processions with huge crowds and real people (all non-actors), we had to be a bit flexible with our shooting style, and try to capture interesting moments the way it is done in documentary filmmaking. Since we had to go with this kind of treatment for the crowd scenes, it would have looked inorganic if the protagonist’s solo scenes wouldn’t have followed the same grammar. I told my cinematographer, that this would be the visual language of the film, irrespective of what scene we are shooting.

What was your main goal in creating the musical landscape and score of your film?
India is a very musical country. We incorporate music in all our festivals, rituals and ceremonies, and the people love to dance. If I was making a film with the backdrop of the Ganpati festival, then it would have been incomplete without the use of music. At our Ganpati processions people generally use a percussion instrument called, ‘Nasik Dhol’ and I have incorporated it one of the scenes. I have tried to keep the sounds and the music of the Ganpati scenes very authentic.

In the non-Ganpati scenes, I have used background score to enhance the emotions and had briefed my sound designer to merge his sounds in such a way that it seems [in] perfect unison.

Can you talk a little bit about your decision to use voice overs to tell the story of this film?
It was an aesthetic choice, and such choices work best when you let the story dictate them rather than trying to force one on the film. The plot of this film was very well suited for the use of voice-overs, due to the thematic elements like grief & regret, and also the surreal-supernatural element involved in the story. [Since] we shot the film on location, on the day of the Ganesha festival, meant there was absolutely no chance of doing sync sound (due to the noise and the music). Production wise the use of voice-overs fit in very smoothly.

It is revealed that one of the characters in the film dies in a traumatic and violent way. Since there are so many people dying in the world as a result of police brutality, and white supremacy, how does your film add to those conversations?
What happened recently with George Floyd was [abhorrent] and scary. We just celebrated the ‘World Peace Day’ on 21st September and the onus that lies with all the artists globally; be it writers, painters, poets, filmmakers; is to ensure that the politics of their art and its heart is in the right place. No matter what political ideology one may follow, there needs to be a certain common ground that should be respected by all. Violation of which shouldn’t be [accepted]. Human right is one such area. Irrespective of whether a person is a republican or a democrat; a black or a white; a Christian or a Jew; a capitalist or a communist; a man or a woman; her/his individual rights to life, property and prosperity should be sacrosanct.

As you mentioned, my film too portrays a similar death, and in its context; tries to give a message of love, peace, brotherhood, and harmony. And I’m very glad it is being received in the spirit I intended. The movie also recently got screened at the “International Peace Festival” in Toronto, Canada – an event which isn’t merely just another film festival, but rather a platform which is proactively attempting to bring about creative solutions to end such violence.

How did you find your main actor, Kaashvi? What sort of qualities were you looking for in this main performance?
I wanted a girl who could look sad even when she smiled. Whenever I cast for a film, besides the acting skills, I am very particular about the look of the actor. In this film it was even more important since the protagonist didn’t have dialogue and the whole performance had to be built purely on appearance and body language. Since I write my own films, from the scripting stage itself I have already visualized my characters – the way they talk, sit, eat – and during the audition process I am on the lookout for actors who come closest to my initial imagination.

During the casting stage, when I was on the lookout for actors, I came across Kaashvi in an ad. In that ad too, she had no lines, and emoted very well just through her expressions. I felt that she perfectly suited the character and then the first time I met her for script narration; her enthusiasm and hunger to do the movie, convinced me that she was the one.

The character interacts with two strangers on the street? An older woman and a young boy. Why did you include those two interactions?
People are afraid to grow old. And they are even more afraid to grow old alone without any partner or family. The old homeless woman on the street was a metaphor on what the future could hold for the protagonist if she didn’t reclaim herself back from the dark dungeon that she was in mentally.

The young boy denotes our future as a planet. He asks the girl the same question, which was asked by the perpetrators of the violence to the victim. However, the context of the question is entirely different this time. And the protagonist’s answer to him fills us with hope and optimism, that no matter how dark the night maybe there is always hope for a bright sunrise. We can bring about that sunrise only if we feed the younger generations with the right values of love and peace.

I love the viewers who pay such close attention to every little detail, the filmmaker tries to craft within the universe of the film.

What were you hoping to leave the audience with by the end of the film?
Introspection, catharsis, and the feeling of having watched a poignant film which touched their heart in some way.