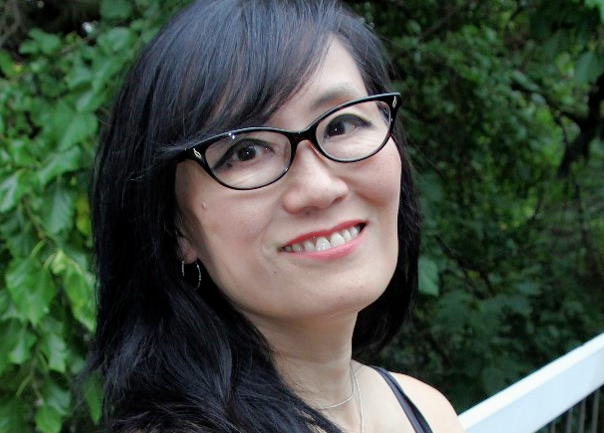 Kerri Sakamoto is the Toronto-born author of three novels, a trilogy which explores the experience of Japanese in Canada. Her first book, The Electrical Field received various nominations and awards. Her most recent novel, Floating City received the Japan-Canada Prize and was nominated for the Toronto Book Award.

When did you know you wanted to be a writer?
I think I knew from age eight. I intuited the act of writing as a way of sharing ideas that might not otherwise be known: ideas in the form of pure information, but also thoughts and feelings. Plus my teacher read one of my stories aloud at an open house, which pleased my mom who became my biggest supporter. Later in life, I came to understand that there are secrets in people’s lives, secrets that need to be told. Secrets about injustices suffered, pain endured and passed on through generations. That was, and continues to be, the main reason why I write. That, and a faith in the power of words and the compassion of readers, to summon empathy.

Do you remember the first thing you ever wrote?
I remember writing “How to Make a Stuffed Doll Out of An Old Sock” when I was seven. We had a lot of mateless socks around the house, so my mom and I gave them new lives.

How did you develop your skills?
I found books I loved and studied them to understand how they worked. I would say I’ve read comparatively few books in my life but re-read them many times. Then I wrote and wrote. I showed my work to people I trust to give me helpful feedback and nurture. It’s important to figure out what and who nourish your practice. For most of my writing life until she passed a few years ago, my mother was my muse. In her omnipresent way, she still is.

Who are some of your biggest literary influences? Do you have a favourite book/author?
Reading James Baldwin was an early revelation in high school. Through reading of the Black experience, I began to think of myself for the first time as a racialized person. I put a name to the insults and alienation and pain I’d experienced growing up in the Toronto suburbs of the 1970s. I began to embrace my own racial and cultural identity, and to pay attention to historical legacies of racism and cultural genocide.

I’ve been naturally drawn to Japanese literary masters, Yasunari Kawabata, Kenzaburo Oe, Haruki Murakami whose books introduced me to aesthetics of the Asian body and sensibility. Of course, Joy Kogawa’s Obasan was an absolute formative influence. So many Asian Canadian writers’ works including my own rest on the shoulders of that seminal book.

How would you describe your work?
That’s kind of difficult. It’s like diagnosing your own symptoms. I would say that I’ve always been interested in the psychology of characters, especially those who live through difficult histories under particular social and gendered circumstances. My three books have focused on the effects of World War II and the internment of Japanese Canadians, but I like to think they encompass larger ideas about trauma and intergenerational distress, displacement, cultural loss and challenges to official historical narratives. A friend described the affect of my writing as oneiric – as dreams and the unreliability of memory figure in my books – as well as visually oriented. I love metaphor, lyricism but also restraint.

What’s your writing process like?
I’d say it’s driven by not always equal parts anxiety, delight, self-flagellation and pleasure. I try to write every day, but it’s not always possible. I have the absolute privilege of not having to work an extra job to support myself and my family, but caregiving takes up a lot of energy and attention and worry. Sometimes it’s difficult to protect the time and space needed to write. I’m a slow, ponderous writer, perfecting my phrases as I go along, which isn’t the most efficient. But perfecting brings me pleasure too, even if these crafted sentences meet their destiny smushed in a paper ball in the garbage.

Tell us about your most recent book.
Floating City is about Frankie, the Canadian-born son of poor Japanese immigrants whose ambition is to own the waterfront of Toronto. That ambition is born of bitterness after his family is interned during World War II. He becomes a successful if ruthless developer who shapes the cityscape in an alternate history of the city. It’s a kind of cautionary tale with a touch of magic realism in which American visionary (creator of the geodesic dome at Montreal’s Expo ’67) Buckminster Fuller plays a mentoring role.

What are you working on now/next?
Looking back, it seems that my three books, The Electrical Field, One Hundred Millions Hearts and Floating City form a loose trilogy chronicling the effects of the internment on varied lives in Canada and Japan. Today, I’m at work on something completely new, which I can only say at this point explores motherhood and celebrity.

Kerri Sakamoto is one the authors at this year’s Word On The Street.