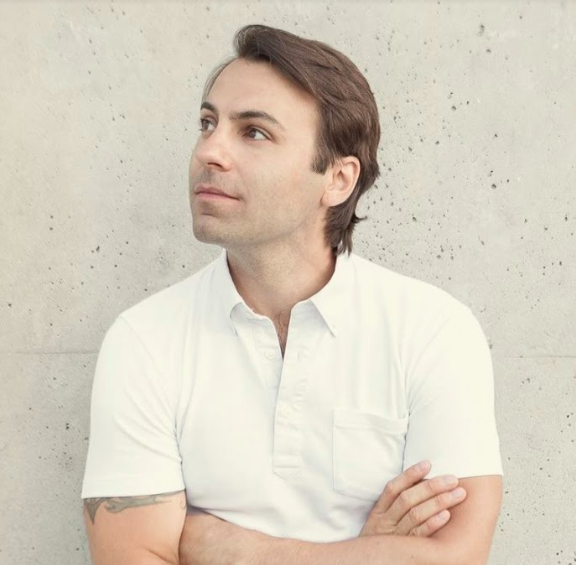 “Darren Lebeuf grew up on a humble acreage outside of Edmonton, Alberta, where he spent his days drawing, painting and exploring the outdoors. After studying art and design at Grant McEwan University, Darren started his creative career as an exhibit designer at the Royal Tyrrell Museum in Drumheller, Alberta. In 2006 he set off on a world adventure. He lived in Asia for nine years, and became an internationally acclaimed family and wedding photographer. During that time, he began to pursue his long-lost passion for illustrating, and eventually created The Land of Le Beef, an online home for his collection of witty cartoons, yearly advent calendars and other illustration projects. He has written and/or illustrated a number of self-published picture books. He now lives with his wife and two kids in Vancouver, the city that inspired his first published book, My Forest is Green. Instagram: @land_of_le_beef, Facebook: @landoflebeef”

When did you know you wanted to be a writer?
I think I’ve always wanted to be a writer, but it wasn’t until a few years ago that I took that desire seriously. When I was living in Vancouver I noticed that Emily Carr University was offering a picture book course (taught by Lisa Cinar)and I signed up immediately.

Do you remember the first thing you ever wrote?
I don’t think this is the first thing I ever wrote, but in grade 7 we all had to write and illustrate books for the grade 1 students. My book was about a boy that threw a baseball so hard that it went to another planet, and an alien threw it back to him. My teacher gave me 110% on it (the highest mark I’ve ever got on anything)

How did you develop your skills?
About 6 years ago I made a conscious decision to spend a half hour every morning to writing and drawing cartoons. Five years ago we had our first kid, and that was a great excuse to go to the library nearly every day and immerse myself in hundreds of picture books

Who are some of your biggest literary influences? Do you have a favourite book/author?
There’s too many to list them all, but a few of favourites are Benji Davies, Oliver Jeffers, Quentin Blake, and Julia Donaldson.

How would you describe your work?
Clever, fun, magnificent.

What’s your writing process like?
It usually starts with a concept, and then I start building from there. Along the way there’s usually an epiphany or two, and then I just keep putting pieces together, or moving them around, or taking them out until the story feels finished.

Tell us about your most recent book.
My Ocean is Blue is the follow up to My Forest is Green. Both books were inspired by my time living in Vancouver, although I wrote most of My Ocean is Blue while sitting on a beach in Hong Kong during a work trip.

What are you working on now/next?
I’m currently working on a couple of projects; one is a book that I’m writing with my brother called A Moose Took My Toque, where a boy pursues a moose through a small Canadian community when his toque gets caught up in the moose’s antlers. The other is a series about a young prankster named Matthew Mischievous, whose capers always seem to catch up to him in the end.