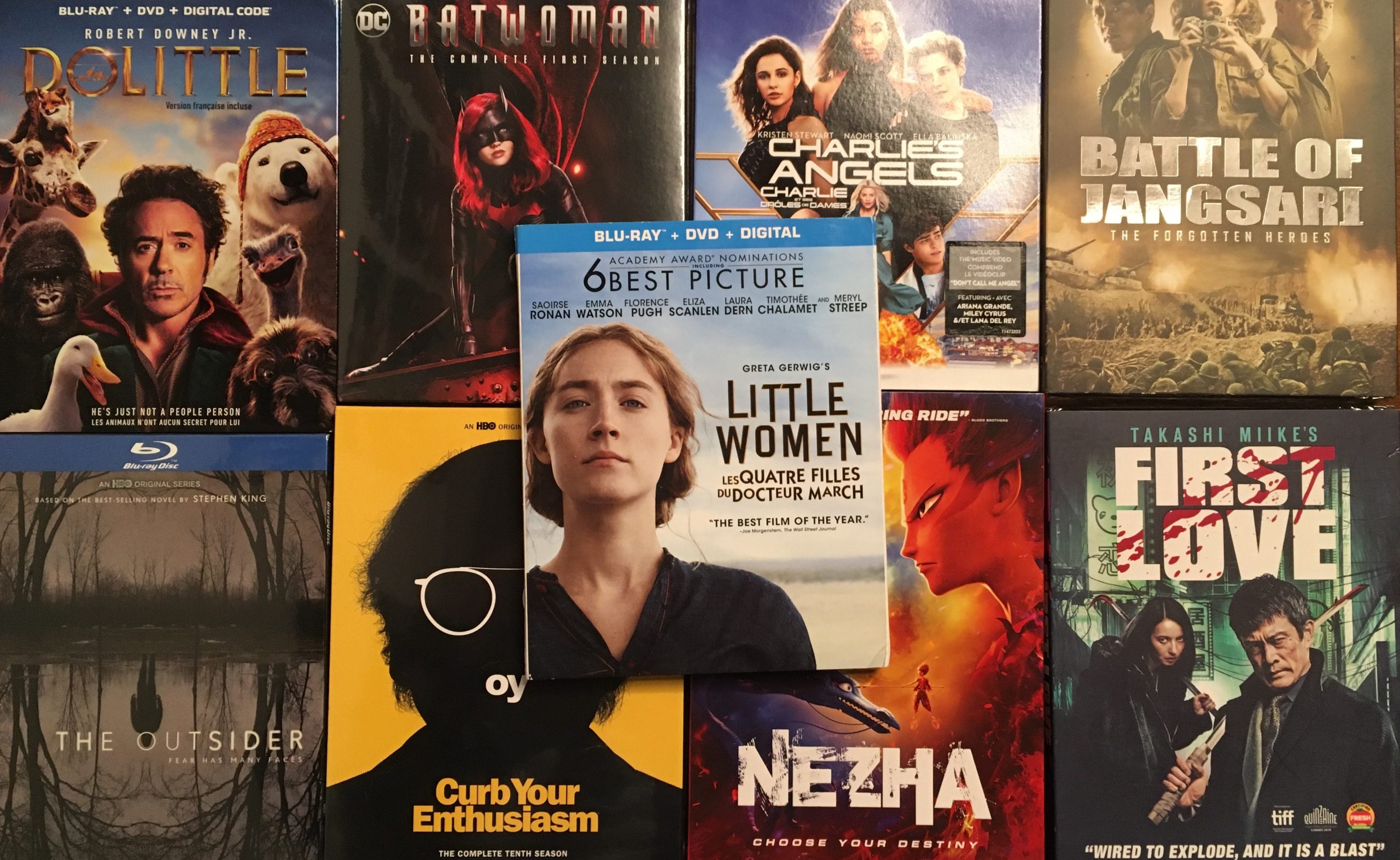 Little Women
Listen very closely because I do not say this lightly- if you buy only one dvd this year, it should be this one. You hear me? Even if you don’t collect dvds anymore, I want you to have this one. Not only are there lots of excellent special features with the uniformly charming and intelligent cast plus the incredible Greta Gerwig but it’s just a perfect rewatch movie that you really really should own. You know there are still stubborn men in your life who need to be forced to watch it for the first time, so why don’t you watch it for a third and fourth while you’re at it? The detail in the performances and direction and design and thrillingly non-linear/non-purist writing reveals new delights every time you see this instant classic reimagining of an all-time classic. Buy it.

Charlie’s Angels
Are you a big Kristen Stewart fan (which you kind of should be regardless of your feelings about Twilight; she’s real cool)? Maybe give this bleh remake a single watch. Don’t buy it for any reason. There is already a killer Charlie’s remake, go watch that instead.

Dolittle
This movie really isn’t very good but the special features on the blu-ray/dvd/digital combo pack are pretty decent. You still shouldn’t invest in a bad movie, though, even if it has the voice cast to end all voice casts.

Battle of Jangsari
A Korean war drama, directed by Kyung-Taek Kwak and improbably featuring Megan Fox, isn’t bad at all. I couldn’t find the dvd price anywhere on my press material but if it’s not overpriced it’s definitely worth a look.

First Love
This one is also pretty fun if pretty brutal. A Japanese action crime drama, this noirish gang story is worth at least a watch if not a purchase.

Nezha
A complicated action adventure for kids, this Chinese animated offering is a fun change from the hyper-American cartoons we’re spoon fed on the regular. Another one with no pricing info but if it’s reasonable it’s definitely a cool addition to any fantasy collection.

Batwoman (The Complete First Season)
I’m torn on this one. On one hand, I strongly believe that $45 is too much money to spend on a single dvd under any circumstances. I think collecting physical media is super important but I also think that Warner Bros should recognize that these things don’t have the value they once did. That said, this is a real television show (not a streaming anthology bingeable or some nonsense) so for that outrageous price you’re getting 20 full episodes of television, which is a lot. Season one is also the only season that will feature the great Ruby Rose in the leading role as she’s been recast for season two so it’s a bit of an oddity worth having. I don’t know, if you have the money, maybe spend it, but if you’re strapped I’d save for a better deal.

Curb Your Enthusiasm (The Complete Tenth Season)
Larry David isn’t my style but it’s hard to argue against his impact on television history, making the Emmy-nominated tenth season of his iconic HBO show a solid investment for any collector. A single featurette is the only extra on this dvd but any special features at all are a miracle these days it seems.

The Outsider (The Complete First Season)
This ultra-serious HBO mystery drama based on a Stephen King book is over-priced for a 10-episode first season on blu-ray for $40 (and the Canadian disc doesn’t even come with a digital copy). The acting is solid in this show and there are actually quite a few decent special features on the blu-ray but I still don’t think it’s worth the investment unless you specifically collect King titles.