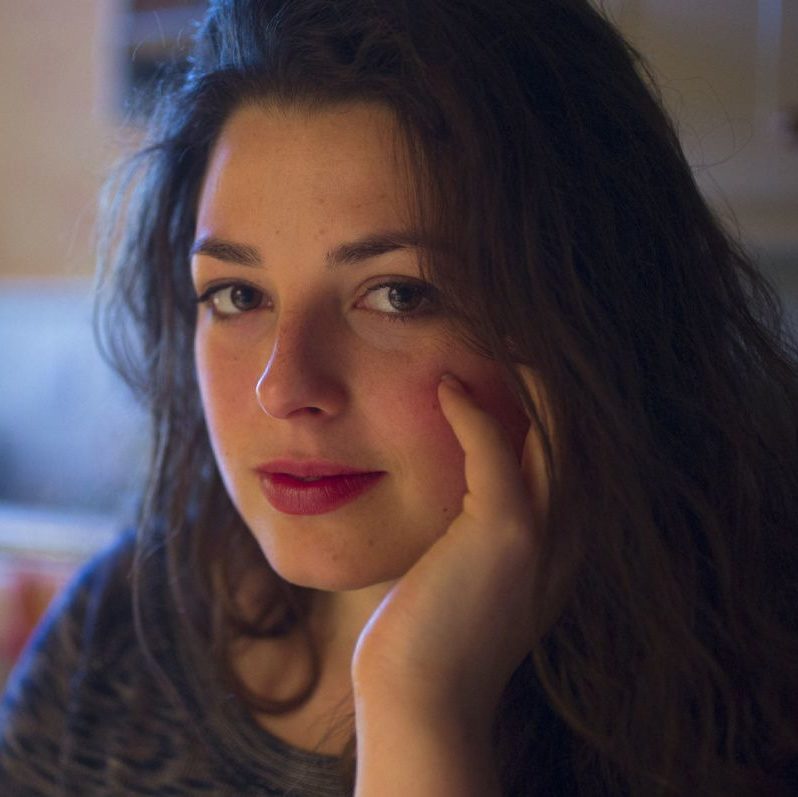 The daughter of an actor and a critic, playwright Charlotte Corbeil-Coleman burst onto the Canadian theatre scene at an impossibly young age with her critically beloved play Scratch. She won the Dora in 2019 for her deeply empathetic and meticulously researched Outstanding New Work Guarded Girls which hit the stage at the Tarragon Theatre just as Charlotte was about to give birth to her first child. We caught up with her mid-quarantine to look back on everything that went into Guarded Girls.

Can you remember the first theatre production you ever saw?
I don’t think so. I grew up with Theatre so it’s hard for me to remember any firsts… I’ve been told I would sleep in a basket backstage at TPM while my father acted in a play about Nancy Drew. I also remember crying and having to be taken out of a play my father was acting in because he kicked a box onstage. I was so upset and confused to see my father on stage being angry. I wouldn’t watch him act again until I was an adult.

Do you remember the first thing you ever wrote?
Yes, it was a picture book, called My Mother and her Computer. My mother was a writer and though I don’t have any siblings, I was intensely jealous of her computer. The book ends with, “I won’t guilt my mom because she needs it to make money” and there is a picture of green dollar bills floating down from the sky over her computer….I wish that was how it worked! Bills falling down while you’re typing would certainly be motivating….

What inspired you to write Guarded Girls?
Matt White, from Green Light Arts, a fantastic company based in the Kitchener, Waterloo, area, approached me about writing a play about Ashley Smith, a teenager who died while under suicide watch at the Grand Valley Institution for Women. Ashley first entered the correctional system when she was thirteen for throwing crabapples at a mailman and she never left the system. Her death was ultimately ruled a homicide as the guards watched her kill herself without intervening. As I researched Ashley’s story, my eyes were opened to a lot of stories of injustice in our correctional systems. I decided I wanted to write something imagined but rooted deeply in all the research and conversations I’d had. I wanted to explore generational trauma in people and in institutions and I began to focus on mothers and daughters and the profound harm the prison system has on them.

What’s your writing process like? Do you plot and plan or start at page 1 and work through?
Guarded Girls was different than anything I’d ever written before… I wrote three separate parts with characters seemingly not related to one another. I didn’t know how the play was going to come together till I got very close to the end, I had to trust it, and trust in the mystery of it. When I finally realized how everyone was connected, I was shocked. Then I began refining and strengthening the story from there.

How much research was involved?
A lot. I read, watched, and listened to as much as I could. There are some excellent journalists who work hard at bringing attention to our prison system. I personally interviewed and listened to women who had recently been incarcerated, and people who worked within the system.

Did you go through a lot of drafts? How did the play change through the development process?
There were a lot of drafts but the core of the story always remained the same. The biggest change was that I added the character of the Guard. I originally had the prisoners play the Guard but once I realized how important it was to hear her speak at the end of the play I knew she needed to be played by her own person.

Tell us about working with Richard Rose. Were you in the room for many rehearsals?
Richard is a very detailed director. He likes to think through each moment. He taught me a lot about trusting my instincts and the way I had written something whether it came from an unconscious place or not. We had done many workshops, so by the time we were in rehearsal I had been in the room a lot. I was eight and a half months pregnant when we began rehearsals so there was only so long I could sit still comfortably.

Walk us through your casting process. Did anyone completely change how you envisioned a character?
I wrote each character, with the exception of the Guard, for the actor who ended up playing them. They are all exceptional actors so they always made my writing better. Columpa Bobb, who played the Guard, made me see the Guard in a whole new way. It’s a really hard character who doesn’t get a lot to say till the end. She showed me the different levels of PTSD that the Guard had and her performance made me love the character in a deeper way.

Did you have a favourite moment in the production?
I love a moment near the end, when two girls are in a very tense situation, and one has been given a chocolate bar and the other hasn’t. The one who has it, eats it incredibly quickly, while the other girl watches.

What were you hoping audiences would take away from the production?
Compassion and action. I don’t think a lot of people think about our prison system. I think it’s hard to think about. It means engaging with a lot of uncomfortable truths about our society. I hope people were able to engage with some of those questions and left having a greater compassion for the women who are trapped in the Corrections system.

Your mother (Carole Corbeil) was a critic, as is your husband (the Globe & Mail’s Kelly Nestruck). Has living with critics shaped your artistic perspective at all?
My mother was wonderful to discuss art with. All forms of art. She taught me the pleasure of talking about what you’ve experienced and what it means to be moved. I also love talking about art with my husband. I think I pay closer attention to art now because I enjoy talking about it so much with him … The older I get the less interested I’ve become in talking about whether I liked something or not. I’m much more interested in why the artists made the choices they made and how I felt at different moments while engaging with the art.

Before he fell in love with you and therefore couldn’t write about you anymore, did you ever experience the Canadian theatre right of passage of a bad review from Nestruck?
I’ve never read any of his reviews of my work and I don’t plan to. I read one review of my play Scratch by another critic and then stopped reading reviews for the next decade.

What are you working on now/ what’s your next project?
I’m currently writing a musical with Hawksley Workman. It’s inspired by his Christmas album, Almost A Full Moon. I’m also writing on a new TV show called Safehaven.

Do you have anything you’d like to add?
I’m honoured to be nominated and very much appreciate all your reporting and supporting of the arts.