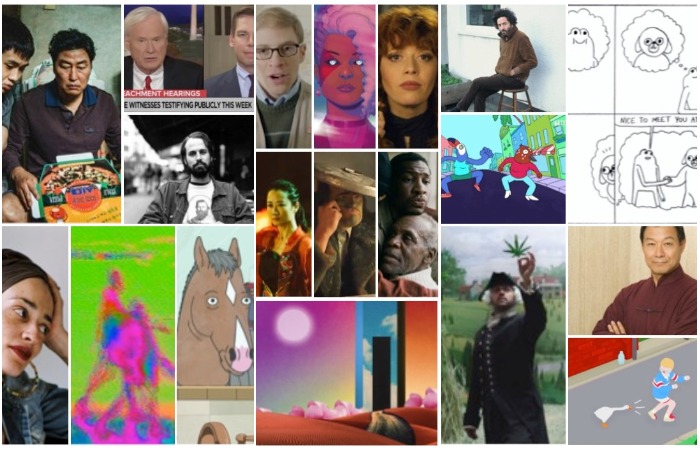 Popular culture is fractured today more than it has ever been. Keeping up with the deluge of good content out there is a full-time job – or maybe that’s just my excuse for not getting around to watching Fleabag yet. Regardless, this profusion of good art makes it so year-end best-of lists are even less scientific than usual. Therefore, here’s a totally not exhaustive collection of things to check out – if you haven’t already – you know, when you have the time.

Ash is Purest White Comes to America
Released in China in 2018, Ash is Purest White is arguably the best film to be screened in the U.S. this year. Paying homage to New Wave gangster cinema and then blossoming into something very different, Ash… is carried by Tao Zhao’s superlative lead performance – and a near-perfect dance sequence set to “YMCA”.

Russian Doll
I don’t know how it took us so long to realize that Natasha Lyonne is a national treasure. She is electric in every moment of this series, which is by turns an existential nightmare, a laugh-out-loud comedy, a thoughtful meditation on the cycle of abuse, and a love letter to Lower East Side.

Trust in the Lifeforce of the Deep Mystery
As cosmic as you would expect from the title, the latest LP from The Comet is Coming is a fusion jazz masterpiece that truly sounds like the future. Bandleader, Shabaka Hutchins (Sons of Kemet), is making a strong case for being one of the most exciting voices in music today.

The Wicked + The Divine Wraps
Since 2014, Kieron Gillen, Jamie McKelvie, and a slew of talented guest artists have spun an epic yarn about the power and pathos of celebrity. We said goodbye to the Pantheon in September and after giving us 5 good years of the most diverse cast in comics, Gillen and McKelvie stuck the landing.

“Grouch”
Saturday Night Live has been above-average this year – thanks in a large part to Maya Rudolph and Woody Harrelson. The high-water mark, though, was “Grouch.” Todd Phillips’ Joker was the most mindbogglingly overvalued movie of the year. Phillips’ eyeroll-inducing film sparked plenty of histrionics from both edges of the political spectrum (including public-meltdown level effusion from Michael Moore). “Grouch,” thankfully, took some of the air out of all of this nonsense pretty quickly with its pitch-perfect Sesame Street-themed homage.

The Last Black Man in San Francisco
A wistful, poetic, and tender look at the human consequences of gentrification, The Last Black Man in San Francisco deftly captures the feeling of being an exile in your own city and having your symbolic birthright be just out of grasp. Star-making turns here from Jonathan Majors and co-writer Jimmie Fails – as well as amazing work from stalwart character actors Rob Morgan and Tichina Arnold.

“The New Normal”
Who would have thought that a commercial for a Cannabis dispensary could make us feel so much? This Spike Jonze-directed, Webby-nominated short, by the ad firm Mekanism, hits the mark thanks to bold vision, superb copy, and top-tier work from Jesse Williams. With a new decade around the corner, this ad reminds us how far we’ve moved the needle in this one.

Tuca & Bertie
This show filled a great need none of us knew we needed: a Tiffany Haddish/Ali Wong buddy comedy. Tuca & Bertie may not be without some minor flaws, but it did provide us the perfect vehicle for the two lead voice actors while showcasing the singular, mad talent of creator and art director, Lisa Hannawalt.

@niall.breen.comics
Irish artist Niall Breen’s Instagram account is as a feel-good stream of comics about a bear and a frog who love each other. Cute and wholesome on their face, Brenn’s strips reference alternative press comics of the 80’s and 90’s, and embody some of that period’s subversive spirit. Also see the visionary @bjennymontero, who is only not officially included here because of his less prolific output.

The Return of Dan Bejar
Not that the genre-bending, wine-soaked, lyrical master has really gone anywhere, but teases for his upcoming tenth album have really hit the spot. “Crimson Tide” feels like a synthesis of some of the best elements of his 25+ year career, and his stripped-down live version of “Foam Hands” is as beautiful as it gets.

The Staying Power of James Saito
In a year of many fine performances (see Tao Zhao and Rob Morgan, above), James Saito’s turn in Always Be My Maybe was especially memorable. A 40+ year veteran of film and television, Satio has been a consistently solid supporting player – often cast as doctors, soldiers, cops, and mob bosses of various East Asian ethnicities. He continued to elevate his material in Ali Wong and Randall Parks’ rom-com as an emotionally-available, weed-positive, blue-collar dad who shattered tired tropes with the help of a charming dance break.

Joe Pera Talks With You Trailer
The hidden treasure of 2018 was Adult Swim’s short-form series, Joe Pera Talks With You. This strange and sweet series is a character study of Pera’s eccentric choir teacher with septuagenarian mannerisms – and an exploration of his rust-belt community that evokes Lake Wobegon. That a second season has arrived is great news indeed. You can binge the Season One here. Standout episode, “Joe Pera Reads the Church Announcements” is a transcendent eleven minutes of television.

“Untitled Goose Game”
You’re a bad goose. That’s the deceptively simple premise of the year’s surprise-hit video game, which features the most gleefully sociopathic protagonist in recent memory. “Make someone break the fancy vase,” “Trap the boy in the phone booth,” “Make the groundskeeper hammer his thumb:” these are just a few items on your to-do list of mischief as you explore the unsuspecting neighborhood. Reminiscent of the bonkers Katamari franchise in its unique gameplay and sunny animation, “Untitled Goose Game” provides hours of immersive, schadenfreude-focused fun. “Honk!”

Purple Mountains
The loss of poet and musician David Berman was one of the hardest of the year. Before he left, he graced us with Purple Mountains’ brilliant self-titled album: the apogee of Berman’s late-period output – and tragically, his swan song.

Until the End of the World Gets its Proper Due
The Criterion Collection has outdone itself with exceptional releases this year (All About Eve, Cold War, Hedwig and the Angry Inch), but the most exciting surprise by far is Wim Wenders’ Until the End of the World. Never before officially available in its full form, this epic feast for the senses spans five hours and six continents. Expect mind-bending sci-fi, whirlwind romance, millennial panic, and a truly killer soundtrack.

New Releases by Zadie Smith, Colson Whitehead, and Salman Rushdie
Three of the greatest living English-language authors published new books this year. Another drawback of the modern age is a serious dearth of reading time, so let’s hope I get to these sometime in the ’20s.

Parasite
Bong Joon-ho’s international sensation deserves all the hype. A slow-burn thriller that is consistently thoughtful, Parasite skewers Korean class structure and the horrors of late stage capitalism while never stooping to preach. No one gets off easy here. Haunting, allegorical, and laugh-out-loud funny, Parasite is one of the greatest achievements of the year.

#fartgate
American political discourse has been a nightmarish hellscape for some time now. How nice it was to have a very brief respite this year, thanks to the uniting power of farts being hilarious. I’m 100% convinced that Chris Matthews was the perpetrator, btw.

Not Over Just Yet
Two of the decade’s best TV series – The Good Place and BoJack Horseman – kicked off their final seasons this fall. On hiatus at the time of this writing, both will be returning in January with their final episodes. With all the uncertainty that the 2020’s will bring, it’s good to know that these heady and humane shows will be coming with us.