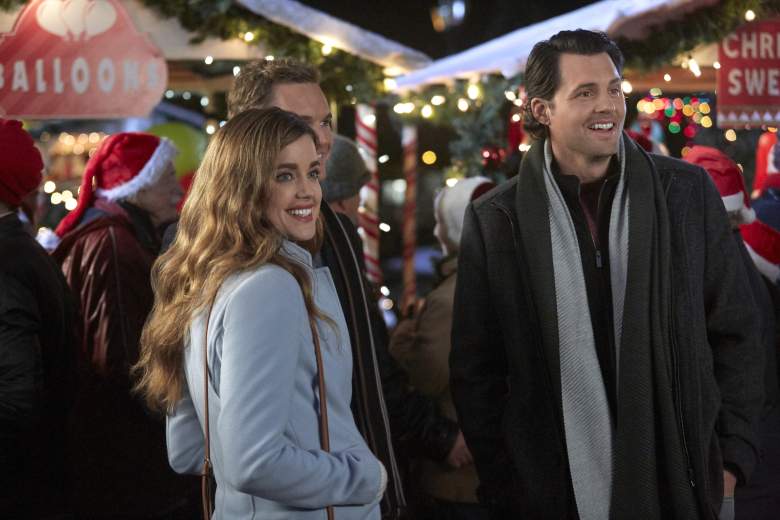 Merry Christmas!!!!! I’ve spent pretty much my whole December absorbing as much feel-good holiday romance nonsense as possible. That means a few official #HallmarkBrand movies sent my way by generous publicists (I don’t have W in my super basic cable package and that’s how you watch Hallmark in Canada) but also tons and tons of off-brand Lifetime or fake-Hallmark movies that follow the same formula but are generally just a little worse. They’re dumb but I love them. Here’s a rundown of what I’ve seen this season (in descending order of greatness).

Small Town Christmas
My very favourite silly romance movie I saw this year (they didn’t all come out this year, I just recorded every one I saw anywhere on the TV schedule). Kris Polaha is the best leading man in these things- he’s casual and honest in a way that bucks the cardboard cutout trend and this character in particular had some nice quirky details that made him seem so much more real than most. Ashley Newbrough played opposite him as a romance writer looking for inspiration. It was simple but just really well executed.

A Christmas Love Story
Kristin Chenoweth plays a choir conductor and Scott Wolf is there and the best friends are well developed and the writing is decent and I don’t want to tell you what it’s about because there’s a twist and it actually works.

Christmas in Evergreen: Tidings of Joy
I didn’t realize at first that this was part of a series so it just felt like all the supporting characters were really well fleshed out and felt like leads in their own right (it’s because they are!). There’s not one but two excellent subplot romances in this one. It’s a pretty basic “big city girl visits the cute town” story but it’s well done and has a uniquely sprawling set of compelling characters and there are some interesting style choices.

Same Time, Next Christmas
This one was on ABC so it feels a little different- not quite as much formula, a more diverse cast, the makeouts are a little hotter, etc. The cast is excellent (when Charles Michael Davis smiles, the world stops) and the multi-year story is compelling even if it’s frustrating that Lea Michele’s character doesn’t get her shit together sooner. Christmas in Hawaii looks aces, sign me up.

Return to Christmas Creek
A big city girl who’s lost the spirit of Christmas narrative tends to grate on me a little but her dad was Stuart Hughes and this one had a childhood best friends who lost touch angle which was charming.

‘Tis the Season for Love
Sarah Lancaster plays a struggling actress who disappointingly moves home to be with a dude from high school but there’s some really good community building, a great friend character, and a fun bait and switch where the love story ends up being with the friend of the guy you think it will be, which I love.

A Rose for Christmas
This movie is just about Rachel Boston making a Rose Parade float and slowly winning over a corporate guy but the corporate guy is the cutest guy of the season so it wasn’t unpleasant ;)

Picture a Perfect Christmas
The guys in these things often have a kid (or, more often, a nephew or niece they’re taking care of after the death of their beloved sibling) because it proves they’re good guys who can be trusted. This one had the very best kid of the season (his name is Luke Roessler and he’s great). There was also an excellent grandma and a very good dog.

Christmas at Grand Valley
This one had some interesting act three wrinkles but was otherwise a pretty boring and very standard small town romance.

No Time Like Christmas
The acting in this one was terrible and the “let’s put on a show!” story was also dumb. It does however have the distinction of being the only Hallmark-style film I saw this holiday with a minority lead. So it gets points for that at least. Also Jim O’Heir, and I liked the weird watch executive.

A Shoe Addict’s Christmas
The wonder that is Jean Smart plays basically Clarence in this truly stupid story that’s like A Christmas Carol meets Being Erica but with a lady who really likes shoes. I love Luke Macfarlane so he was a nice love interest to get to watch; Candace Cameron is really not for me, though. Bonus points for a small but great role for Kristian Bruun. Not enough Kristian Bruun. This one was also funny because the writers made him a firefighter but clearly didn’t know anything about firefighting so he just mentions hoses way more than would be considered normal.

There’s one starring Graham Abbey on my PVR that I haven’t gotten to yet and one starring Dion Johnstone that just came out so maybe I’ll update this in a few days because I really want to see that #theaTO romance goodness!