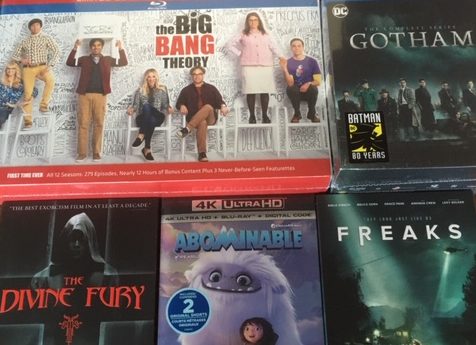 It’s time, once again, for the On DVD series featuring new releases from Warner Brothers, Universal, and Well Go USA.

The Big Bang Theory Complete Series
This set is expensive. At $180 just for the DVD version and $250 for the Blu-ray, I’d say it’s really only an investment for one kind of person: TV collectors. Because it’s a bit repetitive, The Big Bang Theory‘s not a very bingeable show and was mostly enjoyed casually by people who liked a half hour of lighthearted niceness to break up their week (totally valid). Though it was consistently top-rated, this is not a show where its fans really need the full 279 episodes plus 12 hours of special features available on their shelf for repeated consumption. But if you are a TV collector like me, and you don’t have this collection, you’re doing it wrong. I spent 12 years defending The Big Bang Theory as it improved steadily and dramatically from a rocky beginning; it’s a favourite target of TV snobs despite being (at least once they introduced the series-saving female characters) a pretty decent show. The Big Bang Theory was well-produced mainstream populist entertainment that defined a generation of television that evolved irreversibly around it. Do I think you should dedicate over 100 hours of your life to an attentive deep-dive? Absolutely not. But, if you take your TV collection seriously, you have to recognize the importance of this show.

Gotham Complete Series
For the opposite type of collector, there’s this. Five seasons of FOX’s hyper-ambitious Batman prequel for $100 (for the DVDs, though the Blu-ray version with tons of excellent special features is only $13 more) is an absolute steal. This show is immensely bingeable and very rewatchable, which are the #2 and #3 reasons to ever buy the home release entertainment version of something. The #1 reason is preservation- if you keep it on your shelf, it won’t disappear into vague memory of what the late 2010s were like. And unlike most bingeable shows, you can actually jump into Gotham wherever and catch up with context clues, making this the perfect collection for any type of TV watcher. While The Big Bang Theory is something you should only really have on your shelf if you have a pretty big collection, Gotham is a show that’s worth having even if you only have a few others. Besides, I know most of you didn’t watch that bravura final season and you really really should.

Ok, onto some movies…

Once Upon a Time in… Hollywood
Obviously you have to buy this movie. It’s dense enough to merit multiple rewatches even if parts of it are pretty frustrating (the Bruce Lee stuff really bugs me) and you just really should have a complete Tarantino collection (it’s only 9, you can afford 9). If you can, get the Blu-ray that comes with special features because the people who made this movie are pretty interesting too.

Abominable
This 4K+ Blu-ray+ Digital release from Dreamworks is truly adorable and comes with some great special features (“Your Yeti Care Guide”!). Dreamworks often suffers from inevitable Pixar comparison and tends to come up short but Abominable got far more overlooked than it should have.

The Divine Fury
This Korean action-horror hybrid is super intense and a little unintentionally silly, which can be a really fun combination. The dvd comes with some great special features and the MMA elements make a cool accompaniment to Well Go USA’s many kung fu releases.

Freaks
Do you have the emotional bandwidth for another controlling father narrative? Congratulations, because I definitely don’t. Freaks plays on the 10 Cloverfield Lane (or Brisgby Bear if that’s more your jam, it’s definitely mine) conceit of scary bad guys outside forcing those inside to live in terror that may or may not be warranted. It’s got a great cast led by questionable human/superb actor Emile Hirsch and a director’s commentary that helps make sense of it all. It’s solid, it just burrowed into my head and tortured my soul; some people like that though.