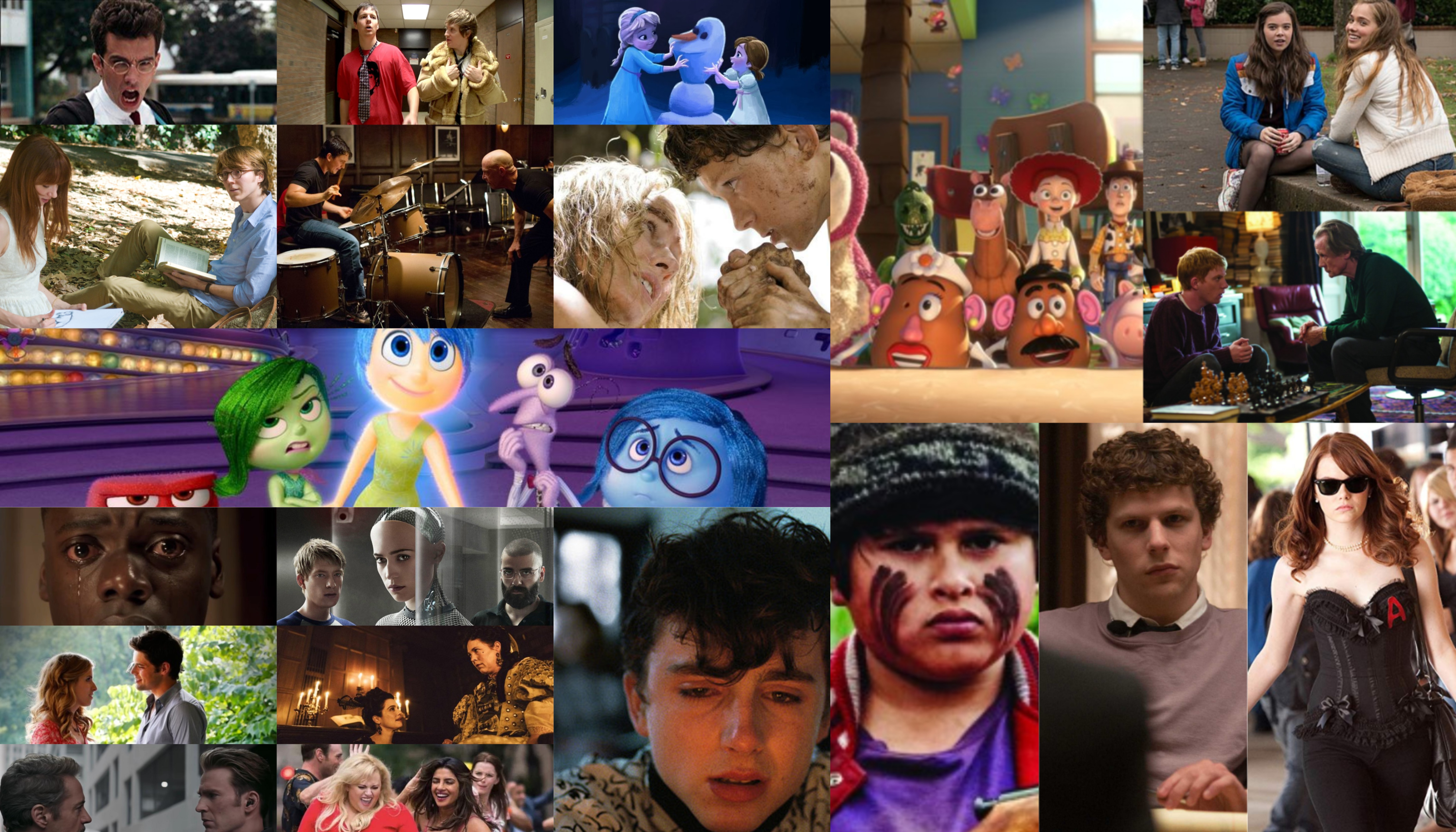 These aren’t the best movies of the decade. I don’t know what those are. And neither do you. The best we can do is mention what we loved most and stop trying to claim that any piece of art can be the “best”. It’s been a long 10 years. Here are the movies that helped me get through:

The Social Network (2010)
I think this movie is career-topping work for literally every person involved (excepting Rashida Jones whose work on Celeste & Jesse Forever easily tops her tiny role in this). Fincher and Sorkin balance each other’s flaws beautifully and Eisenberg dove headfirst into incredible material that played with reality to tell the most interesting story possible. Armie Hammer, Andrew Garfield, and even Rooney Mara arguably (or not-so-arguably) owe their careers to this movie. The score is also incredible. It may have come right at the start but, to me, The Social Network is the film of the decade.

Easy A (2010)
On the topic of launching careers, Emma Stone catapulted to the, ahem, A list when this refreshing comedy finally put her centre stage after a bunch of supporting roles in dude-centric nonsense.

The Trotsky (2010)
This Canadian comedy didn’t get nearly as much play in the states as it should have but it remains one of the smartest, wackiest, most delightful romps of the decade. Find it if you can.

Ruby Sparks (2012)
This is a close second in the race for my favourite film of the decade. High-concept, hilarious, and heartbreaking, this Zoe Kazan-penned indie gem is the most astute portrait of modern gender dynamics I’ve ever seen. It’s disturbing and engrossing and unforgettable.

The Impossible (2012)
I’ve never cried like I cried the whole way through this engrossing drama about a family separated in the 2004 tsunami. There are five brilliant performances from the entire central cast of this film but young Tom Holland carries the heaviest weight on his tiny shoulders in the defining “well that kid’s about to be a massive star” performance of the decade.

Frozen (2013)
I thought my time of truly loving Disney was over. Tangled, The Princess and the Frog, and Enchanted are all okay (Enchanted‘s actually great, it’s just a whole other thing) but nothing captured my imagination like that magical run from Beauty & the Beast through Mulan. Then came Frozen. I’m not crazy about Frozen II but that first one with its almost Menken-level songs and genuinely interesting character writing brought me right back to my childhood, aka the greatest time in history for animated movie musicals. Let’s talk about how the low key most interesting song in this movie is a love duet with the villain wherein he preys upon Anna’s desire for connection and lures her in with the one thing anyone really wants- to be understood. It’s just really great. I also like the reindeer.

The Dirties (2013)
This is the only movie on this list that I’ve seen only once. I don’t think I could handle seeing it again. But I’ve thought about it like once a week for seven years.

Ex Machina (2014)
Tons has been said already about the greatness of this movie. It’s just sublime and has maybe my favourite leading trio in any movie this decade.

The Last Five Years (2014)
Is the movie perfect? No. But, again, this is not a best-of list, it’s a personal list, and I love Jason Robert Brown’s masterwork and Jeremy Jordan more than I love pretty much everything else in the whole world so this film adaptation of said musical starring Jeremy Jordan is on my decade in review list because it’s presence on my dvd shelf fills me with great joy.

Whiplash (2014)
The thing to understand about this excellent film that launched one of the biggest directors of the decade is that it’s not a jazz movie. It’s a sports movie. It’s not even close to an accurate depiction of jazz but it’s a pulse-raising, deeply engrossing piece of filmmaking that makes smart, deliberate choices about what to get right and what to get wrong for the sake of storytelling.

Inside Out (2015)
*yet more sobbing* It moves me to no end that a mainstream monolith put out a kids movie about the fact that it’s not just ok but actually important to let yourself feel sad sometimes. I honestly think this movie has probably saved some lives.

The Edge of Seventeen (2016)
The script and central performance in this coming-of-age dramedy are all-time great. This was also my introduction to Haley Lu Richardson, one of my great loves of the decade.

Hunt for the Wilderpeople (2016)
This hilarious and melancholy pre-Thor Taika Waititi joint is for my money the funniest film of the decade.

Call Me By Your Name (2017)
I’m just now noticing that a lot of the films I’ve chosen have been career launchers. Obviously this is no exception. But Chalamet’s brilliance aside, the rest of the cast here is exceptional (I could talk about Armie Hammer all day) and the filmmaking as a whole is sun-drenched emotional incision that is completely unforgettable.

Get Out (2017)
I’m not into horror movies but the creativity and intensity of this brilliant cultural deconstruction is second to none.

The Favourite (2018)
2018 was a dreadful year for film but Yorgos Lanthimos’ stunning black comedy worked on every level.

Avengers: Endgame (2019)
There’s about 40% too much Nebula in this movie, that’s my only complaint. And even with 40% too much Nebula, the fact remains that Endgame is an achievement the likes of which have never been seen before. The culmination of ten years of storytelling, the climax of the single biggest financial force in movie history, a cast so sprawling and accomplished that in order to maintain the integrity of the movie game you now have to implement a “no MCU” rule. The fact that this is also just a really good film with good performances and good storytelling that’s satisfying and surprising and genuinely moving, well that’s honestly just pretty incredible.