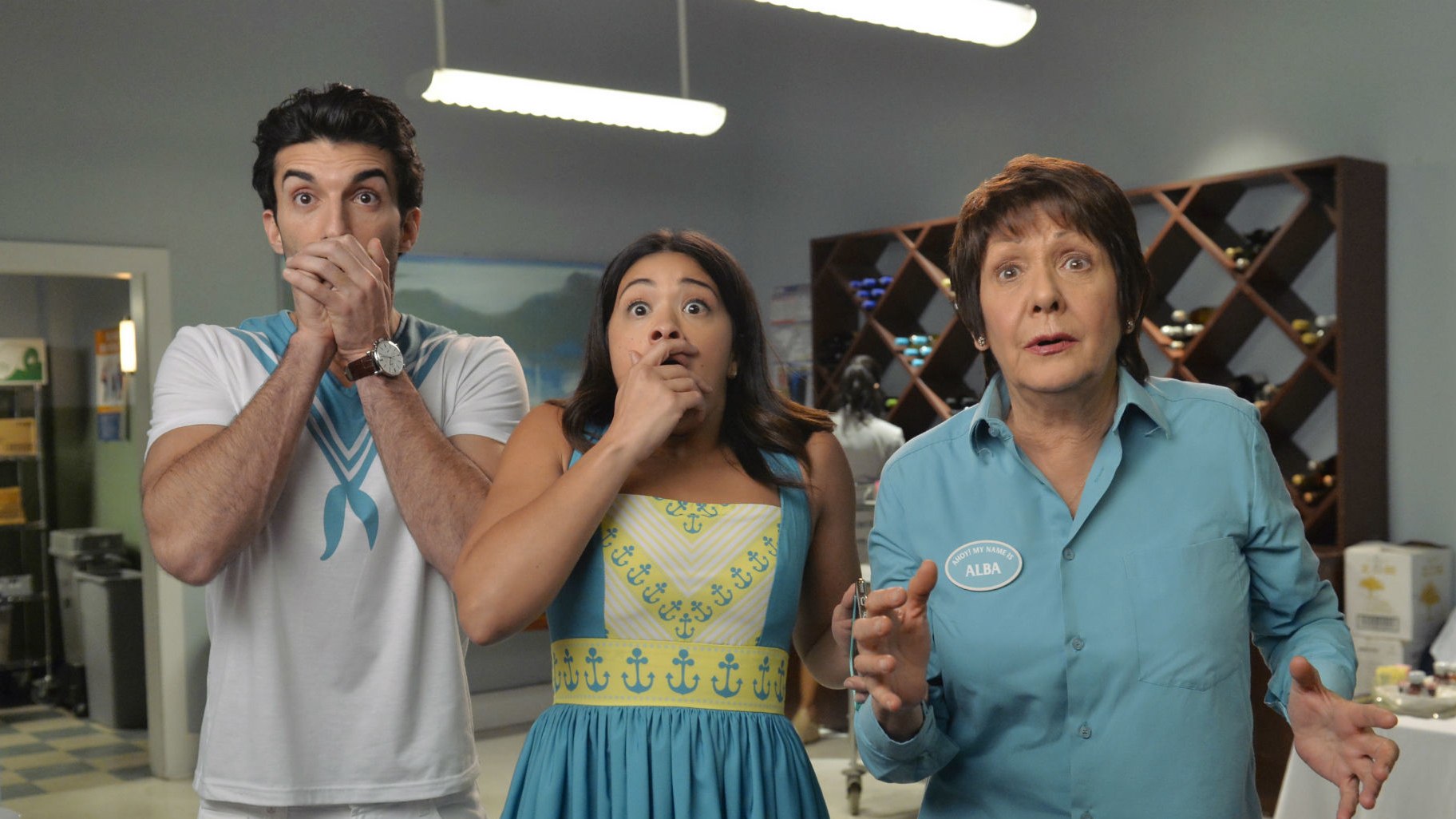 As a sworn loyalist to the dying landscape of network television, I spend much of the year watching TV the old fashioned way- on the TV, one week at a time. So, when summer finally hits and the networks shut down their programming for a few months, I finally have the time to catch all the miniseries and anthologies and streaming bingeables I missed throughout the year (plus the ones that drop in the summer, because Netflix seems to drop all their best stuff in the summer). In this series I’ll run through some of the many binge-watch experiences of my Summer, 2019.

Jane the Virgin– The CW, Netflix

I’m ashamed to say I quit Jane the Virgin. I have a vague recollection of watching the second season premiere when it aired and deciding, in one of my phases of pretending I was going to cut back on television, that it was a show I could live without. I’d watched the first season with mild interest but, finding I wasn’t particularly attached to any of the characters, I wasn’t interested enough in the show’s goofy style to keep me going considering the time commitment of an hourlong network show. I can do a halfhour network or an hourlong cable no problem but 43 minutes an episode with 20 episode seasons? Now that I’ve decided to pay for basic cable, I’ve rededicated myself to that kind of programming- I watch all three Chicagos for crying out loud!- but at the time I quit Jane the Virgin, it felt like too much. Besides, I’d done the telenovela thing with Ugly Betty and found the melodrama to be frustrating no matter how much I loved that cast (all-time-great cast that one). So I quit. Almost four years ago to the day.

Then this summer happened. I’m just gonna level with you- this was a shitty summer. A brutal, terrible, horrible, shitty summer. I tried the hard stuff (I binged Chernobyl), I tried the niche stuff (I binged Fosse/Verdon), I drank up the feel-good until there wasn’t a drop left (I binged the new season of Queer Eye). I looked around and, realizing there was nothing left to try, I did something I never do- I tried something I’d tried before.

Jane the Virgin had always been there as a solid “maybe one day” show for me, something that I knew was sweet and good but maybe wasn’t completely totally my thing. But it would always be there, this mass of unwatched, easily digestible episodes ready for me if I ever had a ton of time to kill and a heart to mend. Scrolling through Netflix, not wanting to take a risk but hating to rewatch something I’d already finished, I realized the time was now. I’d give it half an episode, if I got bored with the antics I could always just switch it off.

Long story still not that short but at least a little bit shorter, I fell madly in love in that unhealthy way that you fall madly in love with the thing that makes you feel good when you weren’t inclined to feel good. I have absolutely no idea what was wrong with me four years ago when I quit Jane the Virgin. I’m glad I did quit back then though, because it meant Jane was there for me now when I needed her. I watched 78 episodes of Jane the Virgin this summer (I figured I didn’t need to rewatch those first 22- she’s a virgin, she had a baby, I get it) and I hope one day Jane the Virgin is what I’ll remember about this summer.

So here’s how it went- it took awhile for me to fall in love with Jane because it takes me awhile to fall in love with the girl everyone else is already in love with. But once I clicked into her, I fell hard for Gina Rodriguez’s all-in good intention and the fact that the show let her flaws be alienating sometimes. Few things turn me off of a show more than the writers thinking their lead is unimpeachable but as soon as I figured out that Jane Villanueva wasn’t Rory Gilmore, I got on board. Season two was also when Yael Groblas really came into her own and the writers let Petra show more dimension than the campy villain she was in season one, a game-changer for me who was always going to like Petra best (Groblas is sensational on this show, where is her dark horse Emmy nom?!). I remember being skeptical of Michael in season one but in season two he’s full-tilt gawky heartthrob without ever being too gawky or too much of a heartthrob and I LOVED that. Brett Dier is so casually charming and silly in an unforced way, and he looks like an actual guy an actual person might know; I was totally #TeamMichael, which is a very helpful team to join in season two.

But… BUT… this is where I shift from “person who enjoyed Jane the Virgin at exactly the right time for her to watch Jane the Virgin” to “person who genuinely thinks Jane the Virgin is really special and good and accomplishes things no other show has/could”… #TeamRafael! Justin Baldoni was the one cast member I was familiar with going into the show so I defaulted to his side a bit more easily than I normally would for the slick guy archetype (I’m unendingly loyal to all Everwood alumni), but then he lost me, but then he got me back, and so on and so forth. My very favourite version of Raf was in season three when him and Jane were at their most functionally platonic, which was even more confusing. The subplot I enjoyed more than any other this summer was my own off-screen journey trying to decide between two sides of the best love triangle I’ve ever seen. I really mean that. All the great TV love triangles, classic though they may be, have obvious answers (Pacey > Dawson), or at least obvious subjective-taste-based answers (I’m hardcore Noel > Ben but I see how a different type of person would disagree). I’ve never been genuinely torn before. Even Younger, which has my other favourite love triangle du jour, it’s easy to break it down who I would pick in each situation (In real life it’s obviously Charles on account of Peter Hermann being Peter Hermann but, story-wise, she has to pick Josh, it’s the only way). But Jane the Virgin, man, I’ve never seen it done quite like this.

There is such a valid argument for both men but it’s a totally different argument and not just a battle of meritocracy. And there isn’t a right answer, at least not in some big cosmic soulmate-y way. Jane the Virgin is the most romantic show I’ve ever seen have a completely mature outlook on real love and adult relationships. The show’s clever use of time allows something that wasn’t right to be right and something that was wonderful be wrong and both those things are allowed to be romantic and sad and practical all at the same time. There is an overarching big bad, this is a telenovela after all, but most of the real conflict comes from emotion and interpersonal conflict and the ways in which good people can hurt each other. Characters grow together and apart and evolve and move on and want different things and all of it, despite being totally silly and over the top, is ultimately way more human than anything else.

Though the hyper-dramatic telenovela conceit isn’t really my thing, Anthony Mendez’s loving narration is a gift from the storytelling gods, as are the touches of magical realism and stylized elements used in incredibly affecting ways (my favourite is the glowing hearts that denote when a person is feeling true love, they’re used at one point in a scene between lifelong best friends who are rediscovering each other after growing apart and my own heart practically burst at the genuine acknowledgement that their love is just as valid and worthy as all the romantic love on the show). And the melodrama does have its purpose, allowing the writers to throw whatever they want at the wall so they’re never scrounging for story and thus throwing their characters under the bus to force plot. There’s no shortage of plot in a telenovela world so the characters are free to react and engage and emote in really honest ways to the craziness around them without needing to artificially perpetuate it. It’s a testament to the genius of Jaime Camil just how strongly I felt for Rogelio, the most cartoonish character on the show who also is somehow the beating heart of everything.

There was a brief moment a few years ago when The CW dedicated itself to a really special sort of show. They started greenlighting earnest storytelling from female voices that played with form. Jane the Virgin was the crown jewel of that moment and now that it’s gone I worry that the superheroes will simply have the run of the place. I hope The CW finds its way to taking another chance on something as different as Jane the Virgin, as authentic, as thought-through, as taken seriously by its team, and mostly as big-hearted. The world needs that kind of show. I know I did.