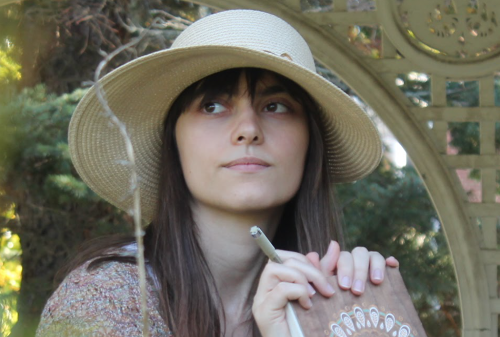 “Sienna Tristen is a multiple-award-winning writer and artist based out of Toronto. She is the author of The Heretic’s Guide to Homecoming, the flagship fantasy story of The Shale Project, and her first work of poetry, The Insomniac’s Assistant, is available through Penrose Press. A purveyor of many skills and talents, she can also lead a yoga class, play you a tune on violin, speak to you in three and a half languages, fix your website, and climb forty feet in the air on a pair of silks. You can find her on Twitter @siennatristen”.

When did you know you wanted to be a writer?
I actually don’t know. As a child I exercised every storytelling technique I had: I would draw comics, compose folk songs, spool out long oral epics with my friends, and, of course, write. I think it had something to do with how much I was reading—I was feeding my love of the written word so much more than the other skills that one day it just crossed some event horizon and became The Way I Tell Stories. I still try to intertwine those other disciplines with my writing as much as possible.

Do you remember the first thing you ever wrote?
Sure do—when I was maybe six, I wrote and illustrated a picture book that amounted to a bunch of fanfiction for the 1998 Pixar movie A Bug’s Life. I think my parents still have it in a folder somewhere. Drawing/writing myself as an ant is still probably the weirdest self-insert I’ve ever done. It may also be responsible for my habit of saving snails and other little critters from busy sidewalks.

How did you develop your skills?
Through intuition, but also through logic! On the one hand, I read as much as I wrote, and I read it all intentionally. I’m an incredibly slow reader because I’m always rereading sentences or paragraphs to figure out how the author did that thing they just did so well. But on the other hand, I studied linguistics at university, and that newfound intimacy with my weapon of choice—language—helped me to really hone its edge.

Who are some of your biggest literary influences? Do you have a favourite book/author?
I have a couple of great loves: stories about stories, and stories that manipulate language in new and interesting ways, and stories with queer characters and themes. I’m also a huge fantasy nut. If you can point me to a book that’s in the middle of that Venn diagram, I’ll devour it. I’ll yell about Sofia Samatar’s work to anyone who will listen—I’ve read Stranger in Olondria three times, and once aloud—and JY Yang is doing amazing things for queer fiction with their Tensorate series. My early influences include Emily Rodda (Jennifer Rowe), who taught me how to do fantasy that put puzzles and cleverness before bloodshed and war, and also Patricia C. Wrede, who gave me bookish, stubborn, magical girls to look up to while I was trying to become much the same.

How would you describe your work?
A friend once described it as Socratic, which I thought was great. Another friend sums up my style as ‘introspective fantasy’, which I also like. I write very intimate, interior stories about individual people who just so happen to reside in spectacular environments. My verse novel, The Insomniac’s Assistant, is a take-your-friend-to-work-day scenario exploring the emotional ins and outs of one very peculiar occupation; my novel The Heretic’s Guide to Homecoming looks like a sprawling fantasy adventure but is in fact a chronicle of the slow and patient growth of someone with chronic anxiety. People also tell me my stories beg to be read aloud—that makes me very happy.

What’s your writing process like?
So much of writing, for me, is figuring out what I want to explore. It’s about themes, and it’s about questions. I’m always writing in order to better understand or process some real-life quandary, so my process actually starts with rooting around in my brain until I dig up the right question for the scene/chapter/book. Then I give my characters the space to shed some light on that question, and hopefully, they arrive at some answers.

Sometimes they don’t. That’s always exciting, because the lack of answers tends to push them to do things in pursuit of answers. And those actions either finally proffer some hard-won jewel of knowledge and satisfaction, or they don’t, and that is a lesson in itself, both for them and for me.

Tell us more about your most recent book.
The Heretic’s Guide to Homecoming is, in short, a mental health narrative disguised as a fantasy journey. The main character, Ronoah Genoveffa Elizzi-denna Pilanovani, is a young man who, understandably, feels a little too small for his name. He’s recently left his hometown—quite ungraciously—because the social and emotional pressures were too much to handle, and now he’s trying to strike out on his own and make something of himself, only it’s really not working out. When the book starts, he’s already tried and failed a couple of times, mostly due to his own self-sabotaging. It’s a plight that a lot of my generation can understand: an inner critic gone haywire, a hyperactive self-preservation instinct that says ‘don’t try anything important, you’ll only mess it up’.

The thing is, he’s got this god, Genoveffa, watching over him, and she’s the embodiment of bravery and adventurousness and truth, so he’s trying to do whatever he can to be worthy of her in spite of his inhibitions. That’s what leads him to befriending a very strange fellow in a coffeeshop, and to going with him to the Pilgrim State, a deeply, richly mystical place on the other side of the continent. Perhaps if he can pull himself together enough to make it there, he thinks, then he can make Genoveffa proud, and be welcome in his family again, and finally feel comfortable in his own skin.

So begins a pilgrimage across the world of Shale, where two moons hang in the sky and all things come in threes and in fives and where old monsters may deign to tell you their stories, if you treat them kindly.

What are you working on now/next?
I’m a book designer/publisher/marketer/all-around-hat-wearer for The Shale Project when I’m not writing, and we just released a second title, Two Dark Moons by Avi Silver. Now that the last of our launch events are over, I can get back to working on the Heretic’s Guide sequel. I’m halfway through the first draft!

I have a very devoted, hyperfocused approach to creative work, meaning I can’t be working on more than one thing at once—unless it’s in a different artistic discipline. So to take breaks from just hunching over my manuscript like a gargoyle, I’m co-composing the Heretic’s Guide soundtrack with the marvellously talented Irene Zhong, and I’m sifting the occasional poem out of my cerebral silt.

Sienna Tristen will be appearing at The Word On The Street Toronto’s 30th Anniversary festival this September. Visit their website for more  thewordonthestreet.ca/Toronto