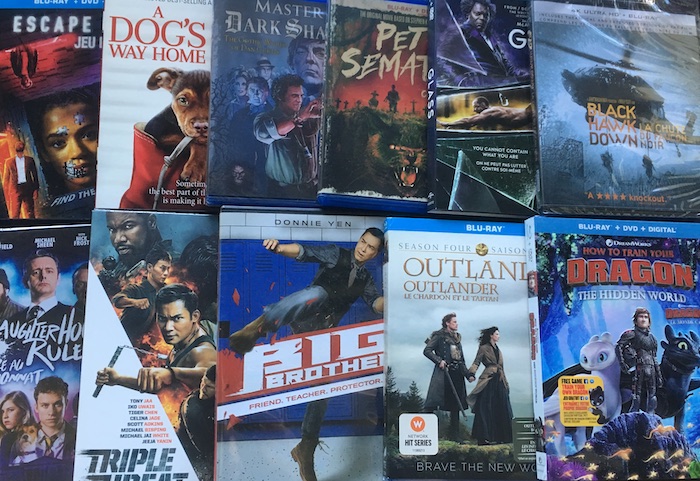 Black Hawk Down
Here’s the thing about this one- you probably already own Black Hawk Down on DVD. It’s an action classic with a great cast, you should have it on your shelf. If you already have it, you don’t need to get this 4K Ultra HD + Blu-ray re-release. However, if you don’t already own it, it’s totally worth getting. The 4K disc has a TON of great special features and, again, you’ve got to own Black Hawk Down if you want to have any real claim on an action movie collection.

Glass
I really liked this threequel despite having seen neither of its predecessors (the Blu-ray has some useful special features for connecting the dots). The acting is killer, the action is great, the storytelling is massively ambitious. It’s messy but completely worth having in your collection.

Pet Sematary
A new Blu-ray + Digital release to celebrate the original film’s 30th Anniversary. The excellent new special features re-contextualize the classic film within a modern context by asking the director to look back and getting the cast of the 2019 version to weigh in on the original. The disc could use more Stephen King content, though. I always want to hear more from Stephen King.

How to Train Your Dragon: The Hidden World
The DreamWorks adventure continues in this unexpected trilogy. I lost interest awhile ago but, if you’re still invested, this Blu-ray/DVD/Digital combo pack is a good buy on account of excellent special features (audio commentary!) including two new short films.

Slaughterhouse Rulez
My biggest frustration with the DVD release of this fun, silly movie about fracking, among other things, is the total lack of special features, especially considering the bonus-content-gold stars they’ve got on board (Simon Pegg, Nick Frost, Michael Sheen). My second biggest frustration is that the presence of Pegg and Frost together sets up Edgar Wright-level expectations that this Edgar Wright-less film can’t compete with.

A Dog’s Way Home
Hell yes, we all need more dog movies in our lives. This one’s pretty good, though not as good as its predecessor A Dog’s Purpose. You should get this Blu-ray + DVD + Digital disc. You want to gamble that you don’t need an extra injection of unconditional love and pure puppy joy in your life? Stop kidding yourself. Some real scary coyote action in here, though; fair warning.

Escape Room
This twisty horror film would feel more innovative in a world without Cabin in the Woods but it’s still a pretty fun time. A solid cast includes Tyler Labine who, before changing lives at New Amsterdam, was very busy eating burritos and making trouble with Ryan Gosling on a boat that was also a high school.

Master of Dark Shadows
Remember that very terrible vampire comedy Johnny Depp made a few years back? It was based on a TV show that people actually liked, made by a guy named Dan Curtis. This feature documentary about Curtis and what went on behind the scenes of the original Dark Shadows ABC series is a thousand times more interesting than that movie remake.

Triple Threat & Big Brother
We actually have a whole podcast episode coming up diving into the world of kung fu movies by way of Donnie Yen’s “Dead Poets Society meets Special ID” new release but we’re including these titles on this list as well because I really want to encourage you to pick them up. I know my DVD collection, massive though it is, skews embarrassingly Western and thus is missing massive portions of film history. The entire kung fu genre is a big part of what’s missing. Big Brother‘s accessibility and Triple Threat‘s Expendables-esque greatest hits quality make these two titles a great place to start bridging your collection’s gap.

Outlander (Season Four)
You’re either into Outlander or not. Their Blu-ray releases are always top-notch with nice packaging and strong special features so, if you like the show, it’s a good one to invest in a physical copy.