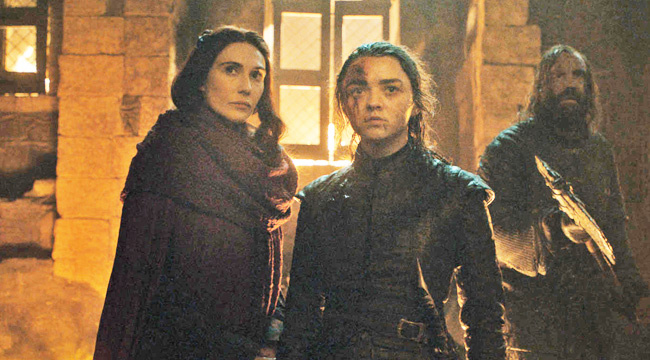 Game of Thrones: The Seven Deaths in “The Long Night”

Yes, more than seven people died, but the episode was too dark to really see them. Yes, there’s a heavy amount of symbolism in that darkness, the fear of the Night King and the army of the dead being the same as the age old legend of the fear of the dark. Yes, the beautiful mirroring of the dagger that started the War of Five Kings ending the Great War was immaculately done. Yes, this ended up being one of the most ambitious TV projects to date, reflected in cost, labor, time and ambition.

Yes, some people really didn’t like this episode. And that’s ok. Action that is hard to see is not action well done. The producers’ decision to intersperse war and fighting with pensive conversations came from, like most things, good intentions. People will get bored if it’s just one big fight, they reasoned. But this is literally the Great War, the ultimate contest we’ve been building towards for seven seasons and change. We had two whole episodes filled with preparations, anxiety, worry, reinforcement… and an audience fully prepared to watch a whole hell of a lot of characters go down swinging. Instead, what we get are seven deaths.

I’m not going to make it my job to tell you this time if the episode was good or bad, because I’m still teasing that out myself. Maybe by the end of this article, you’ll have a better impression of how I feel about it. This was an episode where the biggest expectations and speculations were around character deaths, and I’ll try to address them as fittingly as I can.

Three of these deaths were characters who were with us from the beginning, way back in season one. From the first, we all knew Jorah Mormont was our guy, the exiled badass knight with a secret job and a foolhardy heart. He was going to follow the woman he loved, who’d never love him back, until she lead him into death. Jorah’s character arc had the best sense of completion – we saw him go through depression, rage, grief and a host of other emotions, through fighting pits and the ruins of Valyria and the dungeons of the Citadel. He survived Greyscale to come back and serve his queen, and he died in the North, his home. The sense of completion for Jorah is almost overwhelming.

Speaking of arcs, it makes sense to talk redemptive arcs, and Theon has one of the swingier stories of redemption. He’s a captive of Winterfell but ‘loyal’ to Robb, till he betrays him. He burns two boys bodied and pretends it was Bran and Rickon, but then gets the sympathetic role in his torturous time with Ramsay. He returns to Yara broken, becomes Ironborn again, and then flees when Euron attacks the fleet. There’s a constant uncertainty with Theon, if he’s brave or a coward, if he’s a hero or not. In the end, the show sort of decides for us, with a call back to an earlier episode where he’s bragging about the archers of the Iron Islands. Bran’s validation that he’s a good man is essentially permission for his character to die, the signpost of finality (because there’s no way it’s Theon that takes down the Night King, let alone a White Walker).

Dolorous Edd was the last of the three with us from season one. He’d survived a lot, too – the Fist of the First Men, the mutineers at Craster’s Keep, the attack of the Wildlings on the Wall – and basically every other major battle seen in the North. His constant predictions of doom carried him far, all the way to Winterfell. But his Watch is now ended.

Another three of the characters who died were introduced to us a little later on. Beric Dondarrion, the Lightning Lord, made his first on-camera appearance in season one (when Ned, as acting Hand of the King, ordered him to pursue The Mountain, Gregor Clegane). He doesn’t really come back until later in season three, as the head of the Brotherhood Without Banners. For all of the Lord of Light fans out there, Beric is seen as the practical devotee, alongside Thoros of Myr, the drunk monk. But, after Thoros’ death in the previous season, it was a long shot to expect the one-eyed knight to make it all the way to the end of season eight without his trusty resurrector.

The other wacky religious figure to fall in battle this episode was everyone’s love-to-hate target, Melisandre. The Red Woman has been a thorn in almost every character’s side. She’s pissed off Arya, Stannis, Ser Davos, Jon Snow, Gendry…and at least a dozen more. Constantly looking for a Prince (or Princess) who was Promised, kept alive by strange magic, we’ve seen Melisandre accomplish some impressive magical feats, but at increasing cost to those around her and to her own sense of stability. At the close of the last few seasons, she seemed increasingly frail, shaken and uncertain. Davos even recognizes this, despite his murderous intent. Her passing is a marker of her finally being spent, her purpose fulfilled, her light extinguished.

As faith in the Lord of Light falters, the characters’ faith in themselves shines brighter. Lyanna Mormont is a pristine example of this. She’s been staunch and resolute since her debut in season six, and fans all over have loved her brusque manner, her no-nonsense attitude, and how capable she is at shaming grown men. Small as she is, and small though her house may be, Bear Island is a true terror, and none of them are more terrifying or fierce than their lady. She proves her faith in herself all the way to the end, in her David vs. Goliath moment against the undead giant. Of course, faith in yourself only lasts as long as you last, as the Night King proves by animating her corpse among all the other fallen.

The Night King, of course, is the seventh death. He’s been around forever, in the shadows, haunting the show and the realm. He is the most ancient evil, the first foe and the last, the enemy of the Lord of Light and of the Three-Eyed Raven. At Hardhome, he doubled his army with the Wildlings who didn’t make it on the boat. With Craster’s children, he created new White Walkers to further his dominion. The Night King killed dragons and brought them back, laid low the Children of the Forest and the former Three-Eyed Ravens, did so much for so long that it seemed when he arrived at Winterfell, there was no way he could be stopped. Of course, no way is no match for ‘no one,’ and Arya’s lethal ambush put him down for good.

There are some critics who say it makes the show weaker, that it took the Night King this long to cross the Wall, and he dies in the first fight he gets into. Others say it’s the prelude to the larger conflict, as Cersei and the Golden Company get into position and the survivors regroup. I only have one thing to say – seven deaths, seven kingdoms, and only four more episodes to go.