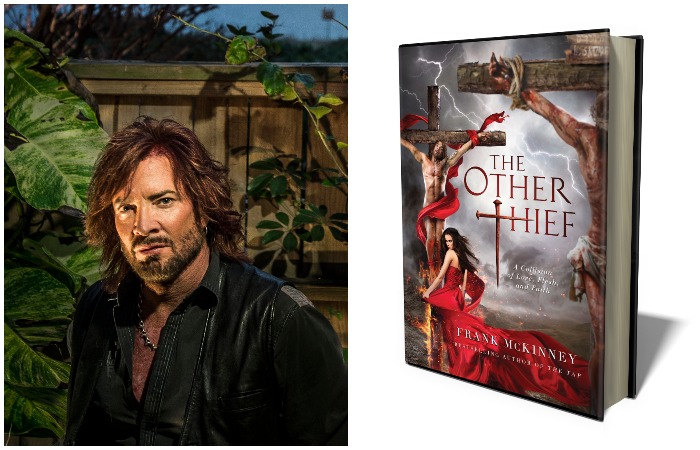 Frank McKinney’s Other Thief, a Must-Skip

I should have known what to expect, when I looked at the author information at the back of the book and noticed that Frank McKinney looks an awful lot like the figure depicted on the cover of The Other Thief, A Collision of Love, Flesh, and Faith. Next clue: the main character, and narrator, is called Francis. Oh dear. It was particularly problematic for me because, as I read, I liked Francis less and less. It was therefore difficult to really get behind the message of the author, who seemed to identify so closely with his main character.

The story is about a very hot Christian rock star, Francis Rose, who has not one, not two, but three affairs and then attempts to receive absolution for his behavior. The falls from grace are described in somewhat breathless detail, from the (successful) attempts of the stunningly beautiful women involved to seduce our hero, through the consummation of two of the three trysts, and the almost consummation of the other. Francis rationalizes his participation in the affairs by blaming these women, who are described as the very persistent aggressors in the situations. Then, he blames his wife, who he feels is not paying enough attention to him as she assumes the primary care for their two children, one of whom has Down’s Syndrome, supports her grieving mother following the fairly recent death of her father and does charity work and pursues her photography work, as well as supporting her husband in his music career. Finally, Francis blames the devil for his increasingly neglectful behavior.

There are conversations with fellow Christians and his pastor, particularly as Francis’ world begins to crumble. There are extensive bible quotations as Francis looks to God for forgiveness and redemption. He begins to liken himself to the thief who died on the cross beside Jesus, hence the title of the book. In my opinion, he continued to rationalize his behavior and did not seem to truly assume full responsibility, which in my mind is an essential step towards receiving forgiveness. While I felt the author certainly knows his bible, and the intention was that this would be an uplifting book about God’s loving forgiveness, it had rather the opposite effect on me. I would not recommend this book.