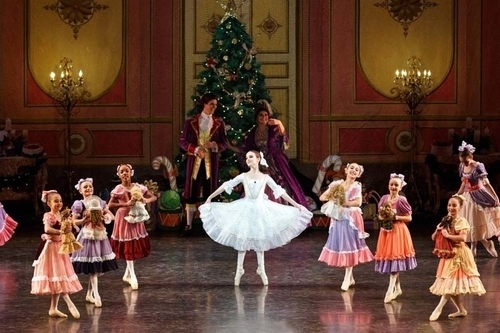 Toronto International Ballet Theatre’s production of The Nutcracker that ran for two performances only at the massive Sony Centre was far from the most polished production. A last minute replacement came in to play the female lead, undermining the company’s flagship claim of world class principal dancers from the Bolshoi, though in a ballet with so much going on beyond the principal pair, the strength of the whole company matters here too much to rely entirely on fancy guests. Artistic director Tatiana Stepanova’s choreography is predictable and uninteresting, which stands out in a story-light narrative ballet like this one. Everything felt just a little budget, a little second-tier, and a little lacking in imagination.

That said, I am so here for a competitor to the National Ballet of Canada, the renowned company who has the market all but completely cornered when it comes to Canadian ballet. TIBT isn’t strong enough based on this Nutcracker but we need to support ideas like this until we have a ballet market within our theatrical landscape and not just one major company that’s seen as the only option. Seeing The Nutcracker is a right of passage (I saw a kids version when I was only two and apparently yelled at the rat king; I have no recollection of this but my mom loves the story) but NBoC tickets are prohibitively expensive (and they’re dedicated to that odd Russian Kudelka interpretation which I’ve never loved). Competition is the only way to make that better. We need more ballet in this city so I applaud Toronto International Ballet Theatre for forging their way, they just missed the mark a bit on this one.