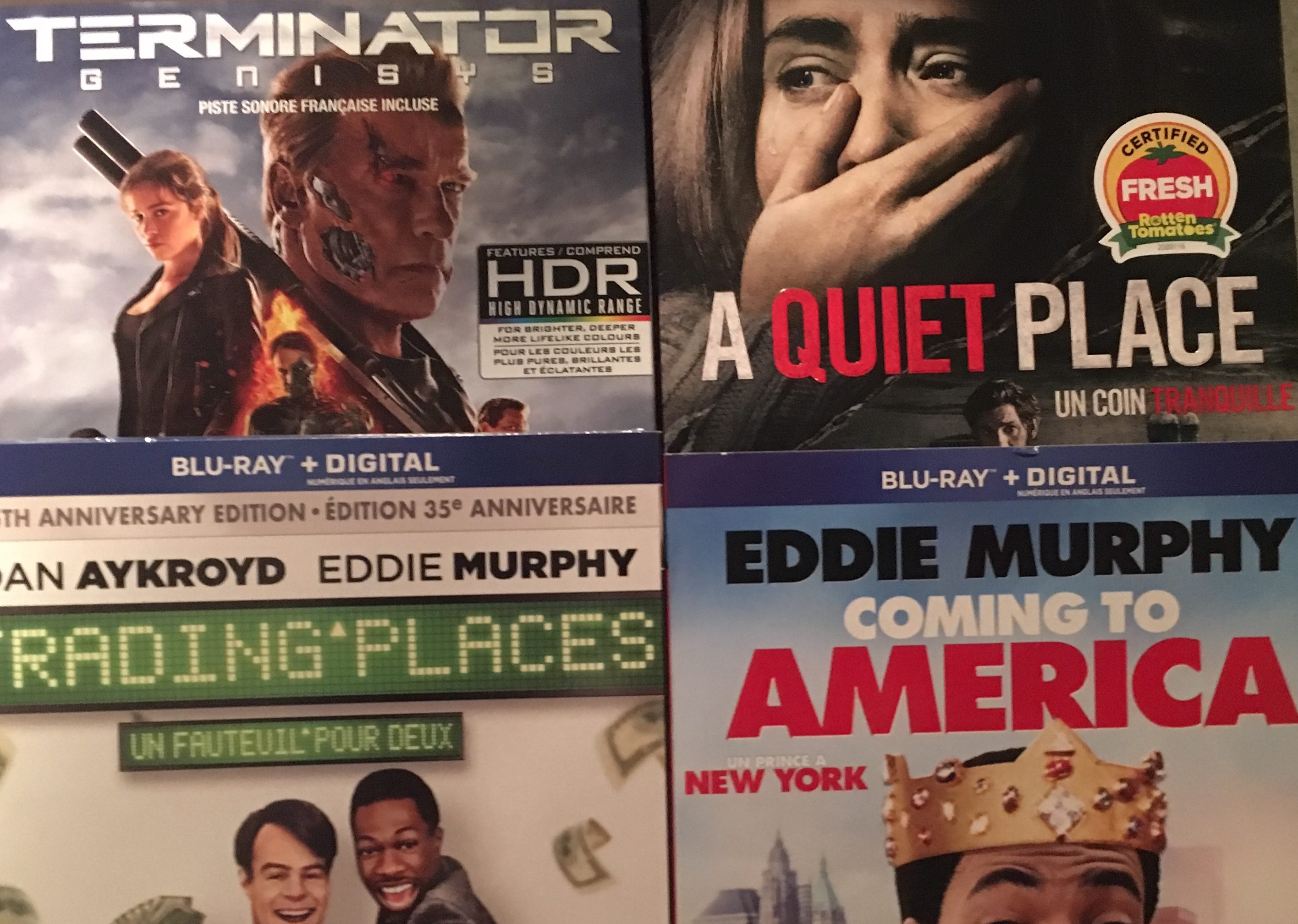 A Quiet Place
You should definitely buy this awesome thriller John Krasinski made. You love John Krasinski, you know you do. And, even if you don’t, this movie should make you love him. Because it’s awesome and it’s one of those writer/director/star things that makes or breaks your opinion of someone. You should love John Krasinski. And Emily Blunt. And the awesome kid actors in this movie (including Noah Jupe who is maybe the best kid in Hollywood right now). The special features on this Blu-ray+ DVD+ Digital release are pretty decent but this is one where an audio commentary track would have been perfect and it’s annoying that we didn’t get one.

Trading Places
A 35th Anniversary Blu-ray + Digital special release with great features and a quick reminder that just because it’s considered legendary doesn’t mean you have to laugh.

Terminator Genisys
A 4K ultra HD + Blu-ray + Digital packed with special features (that smartly focus on effects rather than story because, you know), this release really gets what people want if they’re the sort of people who want to own Terminator Genisys on DVD, highlighting all the film’s strengths and pretending its weaknesses matter less.

Destined to Ride
Here’s the thing, if this totally silly straight-to-DVD family drama about love and horses appeals to you when you look at this amazingly cheesy cover art, you’ll like the movie. If it doesn’t seem like your cup of tea, obviously skip it. Everything about this movie is exactly what you see is what you get (especially since they changed the title from the slightly more mysterious “Pistachio”, which is the name of the horse in the movie, to the very clear “Destined to Ride”… ’cause she’s destined to ride). It’s not a ‘good movie’ but it’s very possible it’s exactly what you’re looking for right now. Get your feel-good horse movie on if that’s what makes you happy.

Lake Placid: Legacy
The same can be said of this movie- if you’re really feeling a crocodile-themed horror adventure, have at it because this movie will deliver exactly what it promises. Ostensibly the sixth film in Lake Placid series, Legacy doesn’t share any names with the previous films and actively ignores all the stuff that happened in most of them, including the Bickerman family who were the connecting thread between all previous films. But the feeling of Lake Placid most definitely lives on in this schlocky instalment that I’m mostly into for the tagline: “this trip may tear them apart”- get it? Ha!

Book Club
This movie is really really bad. I thought it would be fun- all four of the main actresses are inarguably great- but it’s condescending and icky and has too much Andy Garcia pretending that macho assholishness is sexy. PASS.