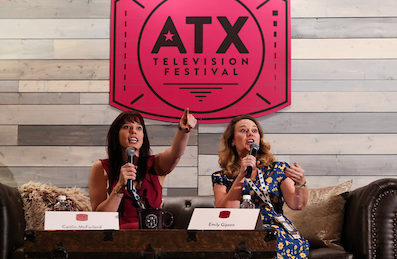 Last week, my hometown was proud to host a four-day festival for all things television, and yours truly got an up-close look at how the sausage, or rather, the shows, get made. Directors, talent, industry pros and press- so much press, with laptops, zoom recorders, flashbulbs and paraphernalia- I haven’t been to a comic-con or similar event of this stature in a while, but it was a wild, wonderful ride.

I’ve outlined some of my highlights from the festival below, divided in two sections. The first, shows that are coming out soon that deserve your attention, because they gripped mine firmly last week. The second, shows that are currently out that, if you haven’t heard of them, you should devote some time to watching them, or if you have, were part of an intelligent discussion on panels comprised of producers, actors and experts of all ranks. Enjoy!

Strange Angel: debuts June 14th, CBS All Access
Science and mysticism, in 1940s Los Angeles. It’s the story of maverick rocketeer Jack Parsons, played by Jack Reynor. If you’re unfamiliar with the history of Jet Propulsion Labs or JPL, between them and NASA, they’re responsible for the entire of history of space travel, and Jack Parsons helped found JPL. They swept much of his story under the rug, partially because of the subject matter Strange Angel explores. Parsons dabbled in the occult, consorted with the notorious Aleister Crowley, and shares a wife in common with L. Ron Hubbard, founder of the Church of Scientology. The hot take is that while the writing on the show isn’t always the best, the content more than makes up for it. There are some lovely long shots, intense dives into cult worship and “sex magick,” and what any fan of October Sky will love – amateur rocketry! The cast is excellent, too. Rupert Friend plays the charismatic, dangerous ‘guide’ into the world of the occult, Rade Šerbedžija as the CalTech professor, and Bella Heathcote for all you Neighbors fans out there.

Sharp Objects: debuts July 8th, HBO
Gillian Flynn’s first book, Sharp Objects, took longer to pitch to a studio than Gone Girl, but the time was well worth it. The director of Big Little Lies, the showrunner from Buffy, and a big-budget studio like HBO all ended up involved in the time it took. Now, this makes the whole project promising. But, add Jason Blum and Nathan Ross as executive producers, make it Amy Adams’ return to TV (and her first time as executive producer for television to boot), and Sharp Objects goes from promising to compelling. I’m a sucker for a good murder mystery/procedural drama, so normally I wouldn’t bore you with just another series in this vein. But between the gorgeous details, insanely on-point casting, shocking camera work, the first episode had me all but shaking by the end. I don’t want to spoil anything for you, so I’ll give you the barest hint at a premise – Adams plays an investigative reporter who has to return to her hometown to cover a murder case that jars tragic memories with every step she takes – and hope you’ll dive deeper on your own.

Waco Limited Series
On the first day of the festival, I went to the screening of the first episode of Waco, the six-part series hosted by the Paramount Network. I know, the whole thing wrapped up in February, but I hadn’t seen any of it and was deeply excited to watch the world of early 90s Texas, David Koresh, and the story that dominated the birth of the 24-hour news cycle before the new millennium. Like most people, I know the vague details of the story: Koresh and his group holed up in their compound, in an armed standoff lasting more than fifty days. But Waco’s first episode showed me that there was so much more at stake, so many other sides to the story than what the basic facts have to tell. The Dowdle brothers developed this project with painstaking attention not just to detail, but to narratives, to the people in that house other than David Koresh. There is a real sense of something human in the show, something feeling and sensitive to the outside world, even as they were cut off from that world. With all that and more, Waco has shot up to the top of my ‘watch next, dummy’ list.

Futurama Live Table Read
I finished the entire series of Futurama years ago, but the ATX TV Festival put on a live table read that was too good to pass up. Phil Lamarr, Billy West, Maurice LaMarche- almost all of my favorite voice actors showed up in person to read aloud the episode where Hermes decides to replace his body parts with robot parts. There’s not one word that could do the event justice, except perhaps, delightful. It was such a treat to see people who loved their project, who worked on this show for twenty years. Also, shoutout to Aisha Dee of The Bold Type stepping in to pick up ALL the female roles, that’s no mean feat.

Breaking Down the Binary
This panel focused on a discussion about the heteronormative tropes and tendencies in TV, but highlighted the passionate people working to change it all. Stars from The Bold Type, Take My Wife and Younger were present, ready and willing to share their experiences in the industry. Unfortunately, a large chunk of time was swallowed up by a ‘robot’ protestor, trying to say that binary means 0 and 1 and that’s it, but the point was, if anything, made more real for the audience. There is a need to break down the sense that a family sitcom needs to be traditional, to abolish the notion that romance on TV is solely between a boy and a girl. The data about diverse programming is real, and the demand for proper representation (people of color, the LGBTQIA community, mental disorders, and so much more) will only go up in the coming years. There’s no protest that speaks louder than that demand.

Get Shorty
I want to end with Get Shorty, because I’d never seen the show and was thoroughly impressed. Beyond a lovely reminder of how much I cherish Chris O’Dowd, the screening was unique. It was one of the only screenings of a show in its second season, and they screened the second episode of said season. A remarkable remake of the original, Get Shorty should be lauded for so much, from a palatable Ray Romano, to a driven narrative, to a female ‘villain’ character who encompasses all possible meanings of the word ‘matriarch.’ I haven’t yet had a chance to dive deeper into the show’s first season, but it’s one of those shows I want to gather a group of people to watch it with, around bowls of popcorn and a sizzling grill, where we can shout and laugh together in simple joy.