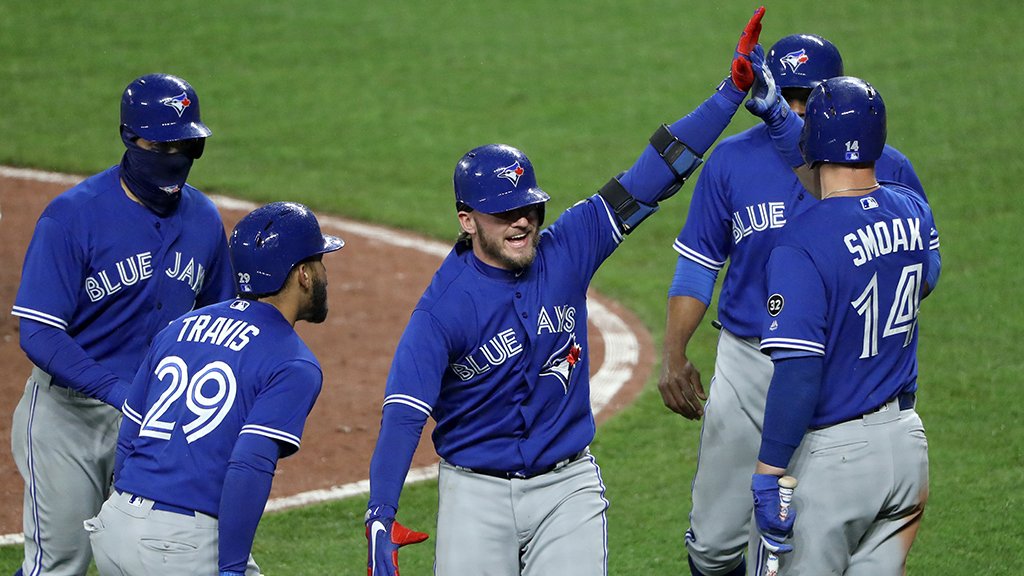 Overall, a week that you can’t be too upset about. I don’t know that the Blue Jays have the kind of roster that will go on dominant streaks of 10 or 12 straight wins, so winning 2 out of 3 and taking series is probably a good recipe and goal for them. They don’t put up much of a fight yet against above average starting pitching, but they’ve feasted on lesser arms and there are far more of those than there are aces. Toronto’s starting pitching will keep them in most games – a general truism that sounds a bit antiquated in today’s statistically specific game, but it will work most of the time.

Last week I said Josh Donaldson hadn’t hit a ball hard all spring and he immediately hit a couple of home runs. Last week I wrote that Aledmys Diaz looked terrible and he immediately got four extra-base hits in his next three games. My keen sense of baseball observation is already in midseason form. Grantland Rice I am not. Nevertheless, I persevere with my column, also known as “Soon-to-be Cold Takes”.

– A big difference from last year that I notice early is versatility in the lineup. By adding an experienced lefty hitter with some thump and selectivity like Curtis Granderson and a switch-hitter who can play three or four infield spots like Yangervis Solarte allows John Gibbons to mix and match more than he could in the past. With Gift Ngeope available as a very good infield defensive replacement late in games, Gibbons can play late inning matchups and hunches a little more as well. Additionally, having Granderson, Solarte and Grichuk being all being good enough defensive players that play more than one spot will give him more chances to be creative, especially in inter-league games. All the more opportunity for everyone to second guess him when it goes badly!

– Speaking of the manager, Gibbons’ easy-going, self-deprecating, laconic nature have made him an easy target for lazy fans over the years and I don’t get it. Gifted, wealthy athletes do not respond well to a hyper-animated overmanager who tries to reinvent the wheel and prove how smart he is, especially over a long 162 game season. If you don’t believe me, just look how fond everyone is of Gabe Kapler in Philadelphia and he’s only been there for a few weeks. Mark Shapiro and Ross Atkins have had ample opportunity to fire Gibbons, especially after last season’s debacle, but they haven’t, even though they probably initially intended to get rid of him. That tells me that the players respect him and wouldn’t be happy if he were gone. Conversely, if the new bosses arrived in 2016 and sensed that players wanted him out he’d be long gone by now. Gibbons has proven over the years to be a stand-up guy when he had to be (see: the Shea Hillenbrand incident, the Ted Lilly scuffle, standing up to Donaldson’s dugout tantrum a few years back and again this spring with the ‘boom box incident’) and players likely respect his quiet authority. If he were really seen as being inept with in-game decision-making or lacking respect, there is ZERO chance it wouldn’t have seeped into public consciousness by now. There has never been a manager anywhere who couldn’t have some of his moves second-guessed, but generally speaking the players and upper management trust him and respect him. You should too.

– Why the hell can’t MLB schedule the first two weeks of the season in warm(er) weather or domes? It’s great that they’ve decided to give the players a few more days off during the season by starting a bit earlier, but you eliminate any rest benefits when so many games get cancelled by bad weather and have to be made up later in the season. Baseball is generally the only sport that cancels games due to weather, so why not do everything you can to shrink the chances of having to do so? There are 30 MLB teams. If baseball played the first two weeks of its season only in domes (Seattle, Milwaukee, Toronto, Arizona and Tampa) and southern locales (Atlanta, Miami, Houston, Arlington, San Diego, San Francisco, Oakland, L.A., Anaheim) that would cover 14 of the 15 games. Add in either Kansas City or St. Louis as the riskiest, 15th opening venue. Spread all the games over those cities for the first two weeks and you’d have almost no cancellations and likely less player injuries. If everyone in Cleveland and Boston and Pittsburgh understood that their opening weeks wouldn’t happen until mid-April every year, I’m pretty sure they’d adjust and eventually be just fine with it. MLB did away with the tradition of Cincinnati always getting the first game of the season years ago anyway. Just as Stars sing that no one falls in love under fluorescent light, no kid becomes a baseball fan sitting in cold, rainy weather for 3 1/2 hours at the end of March. If the second half of April were spent in the northern cities (with a day off or two inserted in there just in case), travel would be lighter, the schedule would even out immediately and no team would have to give up more of their prime summer dates than anyone else.

– The Jays’ opening ten day schedule perfectly illustrates how beneficial the dome and warmer climate games is in April. No cancellations, no rain-interrupted games (both of which can mess up your pitching staff for a while). They have also been fortunate enough to not be involved in any 12 inning marathons in bad weather, which have been fairly common these first two weeks and may lead to issues down the road.

– I was nervous about the bullpen setting up Roberto Osuna when the season started. I remain so. They’ve avoided any utter disasters so far, but veteran arms John Axford, Seung-Hwan Oh and Tyler Clippard have all looked pretty creaky (which is a Canadian way of saying ‘not so good’) at times. They’re all ‘proven MLB relievers’ and are all former closers, but I am about as confident in them as I suspect Raptors fans are about C.J. Miles being their best outside shooter in a playoff series. Which is to say, probably not that much. I would like to see Carlos Martinez and Tim Mayza be given a shot sooner than later. And don’t even get me started on Aaron Loup. Honestly, Gibbons, whatever weirdo, pervy stuff Loup has photos of you doing, don’t let him hold you ransom with them a day longer. Let them come out. I guarantee you Toronto fans will forgive those way quicker than they will forgive you for trotting Loup out there every other day. Toronto’s a very open-minded town, but Aaron Loup being the longest-tenured player on the Blue Jays roster (yes, its true!!) is a perversion this city won’t be able to stomach much longer.