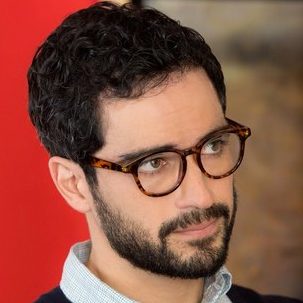 What is your favourite TV show of all time and why?
I just finished Game Of Thrones and I love it.

When did you know you wanted to become an actor?
It was probably when I was 19, I was called in for an audition for a movie in Mexico City called Amar Te Duele. I got the part and from then on I haven’t stopped working.

How did you get involved with Sense8?
I was doing a project in Colombia and received the instructions for the audition from my manager’s office. I had to send a self-tape and had one day to send it, so everything happened so fast. Studying for the tape, sending the tape and then travelling to LA for the callback.

What is your favourite thing about Sense8?
The hypothesis of equality that this show transmits.

What connections, if any, do you have with your character Hernando? In what ways are you similar, and in what ways are you different?
I’ve learned so much from him, specially about his tempo, his patience, his inner peaceful revolution and the appreciation and consciousness that he has towards life.

Tell us a bit about your big scene in the lecture hall. Did you feel what Hernando was feeling?
The hall scene was a bit peculiar specifically how everyone inside that room reacted when they saw the picture of Lito and Hernando. So this was an asset for the scene and creating the right atmosphere.

You and Miguel Ángel Silvestre both identify as straight. Considering the queer experience is ineffable, what did you do to tap into the emotions required for this performance?
The only consideration that I had was that these two human beings were in love.

How do you feel about the show’s gay representation being filled by two straight men?
As an actor, you take into consideration what you have to, to represent the character in a just and beautiful way. Sexuality is a part of them and their story but is not all of them. It was an honor for me. I hope people feel the same way about us representing this couple.

Dish a little on your love interest- did you enjoy the love scenes you were a part of? Is Miguel a good kisser?
Love scenes are always very un-sexy and choreographed and Miguel is great to work with!

I believe it was very important that Nomi’s character was played by Jamie Clayton, an actual transwoman. What are your thoughts on this?
It is great, not only because she is a transwoman but because she is an amazing woman and actress and gave this character everything. I know it means a lot to the LGBTQ Community, so it does to me too.

What were you hoping audiences would take away from the show?
That Love is Love.

Do you have a favourite moment or episode?
It’s difficult to just pick one scene or one episode from a show like this. I really feel like every moment and every scene puts the pieces perfectly together to make Sense8 what it is.

How did you feel when you learned the show was not renewed for a third season?
It is always sad to say goodbye to such an amazing team and cast but we had the chance to have closure on this new special [coming to Netflix June 8th] and are grateful that the fans wanted to see more. We are very happy with how everything went.

What can you tease about the two hour finale series finale that’s coming up in June?
Absolutely nothing haha. Except watch it and you’ll love it!

What’s your relationship with your fans like?
It’s great, I try to interact as much as I can and go to as many conventions as I can to spend time with them. Fans are what makes a show like Sense8 work, their passion [for] each of the characters.

What’s up next for you?
I have a couple of projects coming up that I can’t tell you about yet, but will very soon. I am currently doing a play, Dead Poets Society in Mexico City and it’s been great.