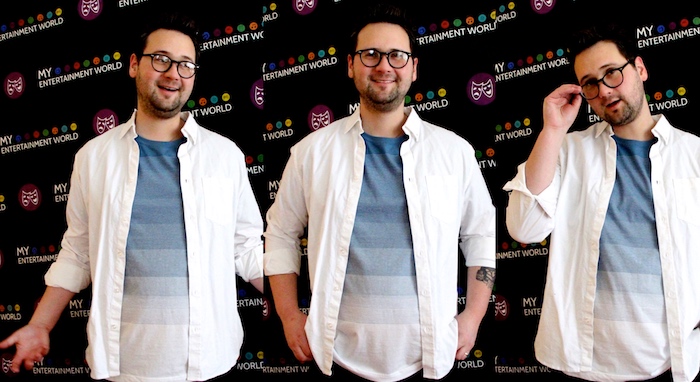 Aleksander Oferd Alexander Offord is a past MyTheatre Award winning-playwright and co-artistic director of Good Old Neon, the company behind one of our most-celebrated productions of the year, Blue Remembered Hills. Directed by his then-fiancée now-wife Nicole Wilson, the brilliant but deeply self-deprecating Alexander was “bullied” into the Outstanding Ensemble-nominated cast where he stood out in the role of John, the unexpected leader of the play’s surreal playground.

Do you remember your first experience with theatre?
No. It was probably a Ross Petty pantomime, doing Cinderella in drag. My family didn’t really go to the theatre. I didn’t really see any real theatre till I was in high school.

Do you remember what that was?
It was probably when Daniel MacIvor had to do his Cher farewell tour. He was retiring all of the solo shows, quitting acting, and he was gonna move to Halifax and never come back.

Sounds peaceful, quitting theatre to move to Halifax.
Every single day I’m like, “I should just go build cabinets for a living.” Then I’d have to learn how to build cabinets, and I can’t do that.

You’re a past MyTheatre Award winner for Best New Play. What are you working on lately as a playwright?
I’m collaborating with a friend of ours, because I hadn’t written anything theatrical for a long time. So I’m collaborating with a gentleman named Matthew Sergi on a piece. I have no idea if this is going to read well when I explain this to you – the premise is really stupid. I don’t want to say it out loud. The premise is that Nicole [Wilson] and Matt’s wife play us – myself and Matt – going to a strip club for my bachelor party. And it’s basically about white dweeb feminist assholes. Like, hyper-educated fake feminists. And along the way, we encounter Jordan Peterson getting a hand job at the bar, and we decide to beat up Jordan Peterson.

I also did a weird adaptation of Medea that may never see the light.

Why won’t it see the light?
Because it’s okay. [laughs]

Blue Remembered Hills was your return acting after a long hiatus. What were some of the challenges that you had?
Feeling terrible, all the time – about acting, and about my body, and wearing tiny little shorts. I probably wouldn’t have done it if Nicole hadn’t been directing, honestly. There was a lot of angst. My interest in performing nowadays is like, “I’ll let people with abs do that kind of shit”.

Was that a comfort level thing, having her as the director?
Yeah, and also because she bullied me into it, and I wouldn’t have acted if she hadn’t asked me to.

Then why John?
That’s a really good question. I think initially she wanted me to play Raymond, who stutters. And I was like, “Oh God. What is this part? It’s like eight lines”. As I’m like “I don’t wanna act. I don’t think I’m that good of an actor”, I’m also like “Well, can you give me a bigger part?” [laughs]

No, I think it was just the way casting worked out. It was a somewhat complicated process to cast, and figure out who would be best, and which bodies would look interesting together. Hell, I think the fact that my body type and Michael-David’s body type – there’s some symmetry there, and maybe that had something to do with it. But I’m not really sure, to be honest with you.

In the original script, it’s adult actors playing children, but then Nicole changed it, and it’s adults playing adults who act like children. How did that change affect your process?
It didn’t. You can’t play a kid, right? It’s impossible. It doesn’t make any sense. All that means is that half the time you get actors who are like [childish voice] “Oh, boy! I’m six years old now!” Right? You can’t play a kid. You can only play the scene. You can only play what you’re doing. People are very precious about acting. Not to sound like the second coming fucking David Mamet or anything.

How did it change the process? Well, let me tell you – it didn’t, really, because our interests as theatre-makers is not really to tell stories about characters in a straightforward fictional way. The way we approach making theatre is always “What is the experience?” We’re creating conditions in which certain kinds of experience can happen, rather than try to tell a story with characters. Narrative, all that stuff is actually secondary.

I guess if you were to watch it in the rehearsal room, and you were to say a direction – not that Nicole necessarily directs like this all the time, but in general, it’s more like, “What is the experience that you’re generating for me when you play the scene like that?” rather than “What would John do given his detailed backstory as whatever?” A lot of the scenework comes through. Nicky does a lot of improvisation-type stuff that’s more just about performers in space doing interesting things rather than the psychology of the character.

It’s a really physical piece, with musical elements as well. Talk a little bit about the non-narrative theatrical elements that she put in there.
Here’s the thing. Nicole picks broken scripts that are really shitty. I don’t know if you saw The Two-Character Play- it’s a terrible script. It doesn’t make any sense. It doesn’t go anywhere. But she’s really excited about these broken scripts because I think it’s freeing. You don’t have to answer to a performance tradition, or anything like that. So all the non-narrative stuff was like, “We’ll just use these relationships, and we’ll change all the lines and all the references and everything, because you know, I think he’s dead anyway, and what, are his kids gonna sue us?” We didn’t make any money from the show. Fuck it, right?

So the songs and everything – it just comes from treating the script like it’s the set, or the lights. You would never be like, “Well, the lights have to be like this because the light is on”, right? The light is always in service of the show, and so’s the script. So the script can change. You can add things, and try to build a show rather than realize a script.

You’re here representing the Outstanding Ensemble nomination. Tell us a little bit about working with the rest of the cast.
It was actually a really positive experience, which is not always the case in the rehearsal room, but everyone was super cool. It was really, really, fun. It was not a super intellectual process. It was more of a visceral process, just trying to find ways to make everything work.

It’s tough because you never know what it’s going to look like when you start it, which is a really profound observation to make about making shows. But we didn’t know when we started it that it was going to be a white room, white face and people running around, and “mungle mungle,” or whatever it is that we said, with weird gestures. We didn’t know that. All that stuff came out to having really great performers. People who aren’t just really good actors, but really good performers, and really open to different kinds of performance. That was really useful, and they were all really great at it.

Do you have rules about how much you can take work home with you, or does everything stay in rehearsal?
No, we talk about it constantly.

So it’s your entire life.
Totally. And we’re quite happy with that. It’s great. Even with going all the way back to the first show we ever did as a company, which was The Hystericon in 2013, she co-directed the show, she dramaturged the show. She co-directed Potosi, she dramaturged Potosi. It’s always a collaboration between us. I’m the Kathleen Brennan to her Tom Waits.

What were you hoping audiences would take away from the show?
I hoped that people would care about the world, and about others.

It’s asking too much.
It really is. Of Toronto in particular.

I don’t know what I want them to take away. It’s more important for me that people have some sort of experience while they’re watching it, rather than they go home and it’s like, “What did you learn about your life in the show?” That’s not so important. I just hope people had an experience that hopefully wasn’t them having post-traumatic episodes, that affected them or made them think about anything differently. Even just thinking about theatre differently. That’s useful, right?

Did you have a favourite moment in the production?
I loved the opening. I loved the pre-show. I always like that, when people do things that are like, “the show begins before it begins”. I always think that’s really interesting, and not in a lame “There’s a character onstage with a yoyo” kind of way, but in a really interesting way.

But I also liked the headstand scene, because it was always like, “Is he gonna do a headstand today? I don’t know! What are we gonna do if it fails? Well, we’ll figure it out in the moment.” Theatre’s the best when it’s actually really something that could go wrong, and then you have to actually figure it out in the moment, not some sort of canned thing.

What are you doing now, or what’s next for you?
We are meeting to discuss what we’re gonna do in the Fringe this summer. The current idea that we’re floating is a theatrical playlist for somebody. We’re not sure who yet. It’ll probably be some sort of political figure, or some person on which a certain number of political issues are intersecting at the minute.

We’ll take six songs, and then use those songs just as provocations to interpret them pretty non-literally in different segments. So the songs may not actually appear in the piece, but they’re the impetus or stimulus that we’re responding to. And it’ll be like a playlist for [insert person’s name here]. Basically, it’s like the opening of Blue Remembered Hills, but a whole show of that.

Do you have anything you’d like to add?
You better not fucking spell my name wrong, Kelly.