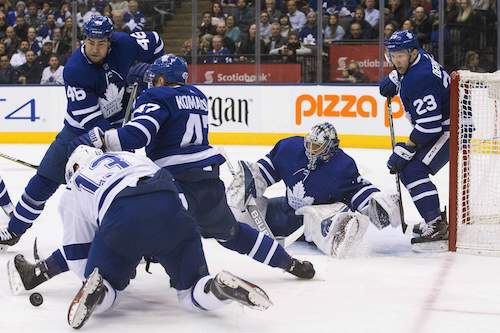 The Leafs Are Actually Good

Hear me out. If you follow hockey twitter, or hockey facebook, or any hockey forums or chat rooms (are chat rooms still a thing?) with any smattering of Leafs fans, you’ve likely heard the phrase “The Leafs are actually good.” Hockey blogger Jeff Veillette coined the term shortly after the team drafted highly touted prospect Auston Matthews – you may have heard of him – and has spent the last year and a half vehemently defending his claim to all non believers. The team is young, they’re inexperienced, and they are still finding their footing amidst the rigorous structure that coach Mike Babcock lives by. As good as they have looked at times, there are moments where flashes of the Carlyle-era team seem to materialize on the ice. And while it’s ingrained in Leafs nation to expect the 18-wheeler to free fall off a cliff in a more cringe-worthy drop than Arizona’s playoff odds, it’s important to remember that these Leafs aren’t those Leafs.

Let’s start by taking a look at the depth of the organization as it stands today. We won’t go as deep as the Solar Bears because ECHL, but I’d like to focus on the Marlies for a moment. Many fans, myself included, thought the emergence of Matthews, Marner, Nylander, Hyman, Brown, Kapanen, Leivo, Soshnikov, and Dermott, as well as the loss of Brendan Leispic, would deplete our farm system and dry up any chance for the Marlies to succeed in their own right. How wrong we were. The team has been absolutely on fire, and though Dermott was a large part of that success it’s largely been on the backs of leading scorer Andreas Johnsson, unlikely captain Ben Smith, could-be-4C Miro Aaltonen, defensemen Justin Holl, and absolutely stellar goaltending from Garrett Sparks and Calvin Pickard. Just when you think all our cards are on the table new cards materialize. I’m certainly not implying the club has cards hidden up their sleeves, but Lou Lamoriello’s creative use of the CBA is akin to sleight of hand: just when you think he’s been backed into a corner with no choice but to make a roster move or trade he throws a vacation to Robidas Island into the mix and the playing field tilts.

I was at the game this Sunday. It was the final game of a 3in3 which is ungodly and to be perfectly honest I didn’t know that such a thing existed in professional sports not called baseball. Granted, the AHL allows for more roster movement than the NHL, and the team was able roll different combinations for each of the three games, but I expected to see a very tired team with their legs losing steam throughout the match. Instead, we got a team that looks incredibly hungry. Justin Holl looks as confident as I’ve ever seen him. I guess two NHL goals on two shots will do that for you. His poise on the ice, and his inkling to jump into the play set him apart from the rest of the blue line, which also featured Andreas Borgman in his first game back after taking a disgusting elbow to the head in the first game of the back-to-back-to-back from scheduling hell. Borgman, in an amazing turn of events, was paired for much of the game with fellow Swede Calle Rosen, whom he beat out for the 6th spot on the Leafs’ blue line for the first half of the season. They were fine. Borgman played with the confidence and competitiveness of a skater fighting to get back into a lineup that he’s grown accustomed to on a much bigger stage. Rosen looked like he’s a good depth player on an AHL team.

Also playing was Nikita Soshnikov, in the final appearance of an extended conditioning stint with the Marlies, and what could very well be his final game with the organization. His future will need to be decided in the next week or so. If the club wants to retain him it will be at the expense of Kasperi Kapanen. If they want to trade him, well, Mike Green’s name has been floating around every water cooler in the GTA for the past month. Maybe Lou will take him for a nice dinner and he’ll wake up on Joffrey Lupul’s couch with no clue where he is or how to get back to Canada. Time will tell.

They bested the Lightning in a huge statement win that proved they can play with arguably the best team in the NHL (those Golden Knights are playing with house money and could go all the way) and have gone 8-1-0 since their January loss to the Avalanche that I sadly witnessed first hand from the beauty that is standing room. In that time, they’ve managed to reignite offensively, and Nylander and Marner have started contributing at levels that this fanbase hoped they would in their sophomore season. That offensive explosion has been at the expense of the defense-first mentality Babcock had them playing during a string of games where they looked much better on the back end with mixed results. But Frederik Andersen has been only okay in that stretch – three of his last five starts have seen a SV% of less than .900 – and yet the team is still finding ways to win.

Mitch Marner was in beast mode this past week against the Senators, Nylander jumped on that slipstream to rock the Lightning, Matthews has been consistent in a way that only Matthews seems to be, and will solid contributions from the rest of the team, they just keep pushing deeper and deeper into a playoff spot. Maybe scratching Matt Martin was the right thing to do?