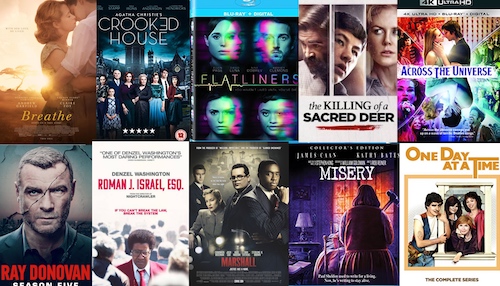 Marshall
A tragically overlooked historical drama about a young Thurgood Marshall and the case that made his career, Marshall has the sort of ridiculously awesome cast that makes you wonder how it’s possible it was so tragically overlooked. Sterling K Brown, Josh Gad, Dan Stevens, Kate Hudson, James Cromwell and, most importantly, Chadwick Boseman in the title role. The biggest movie star on the planet this particular week, Boseman built his pre-Black Panther name playing legends (Jackie Robinson, James Brown) and it’s exciting to see him step out of the Marvel complex for a second to continue making his mark in important cinematic retellings of history.

Roman J. Israel, Esq.
I didn’t love this Oscar-bait character movie but Colin Farrell was great in it (even though he was featured in so little of the advertising that I literally didn’t know he co-starred until I was watching it) an he gets his own featurette on this DVD so we’re all good.

The Killing of a Sacred Deer
Speaking of Colin Farrell, this is a blu-ray well worth owning. Incredible performances (like the leading one from the perennially underrated Farrell) anchor this stylish and difficult Yorgos Lanthimos movie that’s best watched multiple times to completely get (hence, worth owning).

Breathe
The first ten or fifteen minutes of this feel-good drama about a polio survivor who pioneers wheelchair technology are the perfect showcase for Andrew Garfield’s best skillset- slightly caddish charm. After that, he’s stretching too hard, showing limited self-awareness in striving for Eddie Redmayne’s career when Hugh Grant’s is a better fit (I don’t mean this as an insult, I love him, I just want him to make rom-coms!). Claire Foy, however, is perfection.

Flatliners
A few special features on this blu-ray make owning this unremarkable genre flick somewhat worth it, but the disc doesn’t delve far enough into the nerdy minutiae that makes the filmmaking here intriguing.

Across the Universe (4K ultra HD)
Here’s where we start to get into the special features I’m always looking for. The latest release of this weird, ambitious musical gives us 5 featurettes, extended musical performances, and- the holy grail of special features- an audio commentary track from visionary director Julie Taymor (aka one of the most interesting creators of her generation).

Misery (Collector’s Edition Blu-ray)
YEESSS Special Features! This is the motherload and it’s the icing on the cake of a classic film that doesn’t even really need special features to be worth owning. Not everything is new to this special edition but at least a few things are so this disc is best for people who don’t already own Misery or people who are so creepily obsessed with Misery that they need to have every single piece of new content even if they’re paying for some things they already have (aka, people of whom I’m definitely terrified). There’s lots of Rob Reiner content (I could go on and on about how much I love him and basically every movie he’s ever directed), a full audio commentary for William Goldman, plus multiple featurettes including really interesting hyper-specific ones about the music (yay Marc Shaiman!) and makeup of the movie, and lots of cool in-depth psychological stuff that gets into the grime of what makes Misery interesting. My only criticism is that there’s not enough from Stephen King.

One Day at a Time (The Complete Series)
Now is the time to get this Complete Series and catch up on a classic TV show that’s gotten a little lost to time. New interviews & features (including a cast reunion) supplement the set but it’s really all about the show itself which is really worth watching before diving into the wonderful new Netflix reboot, one of if not the most effective adaptation to come out of this ridiculous reboot boom.

Ray Donovan (Season Five)
Susan Sarandon is in season five of Ray Donovan, that’s the one piece of information I can give you to sway your decision on owning this boxset. Either you love Ray Donovan or you’ve already forgotten that it exists. This season has decent special features, including an audio commentary.