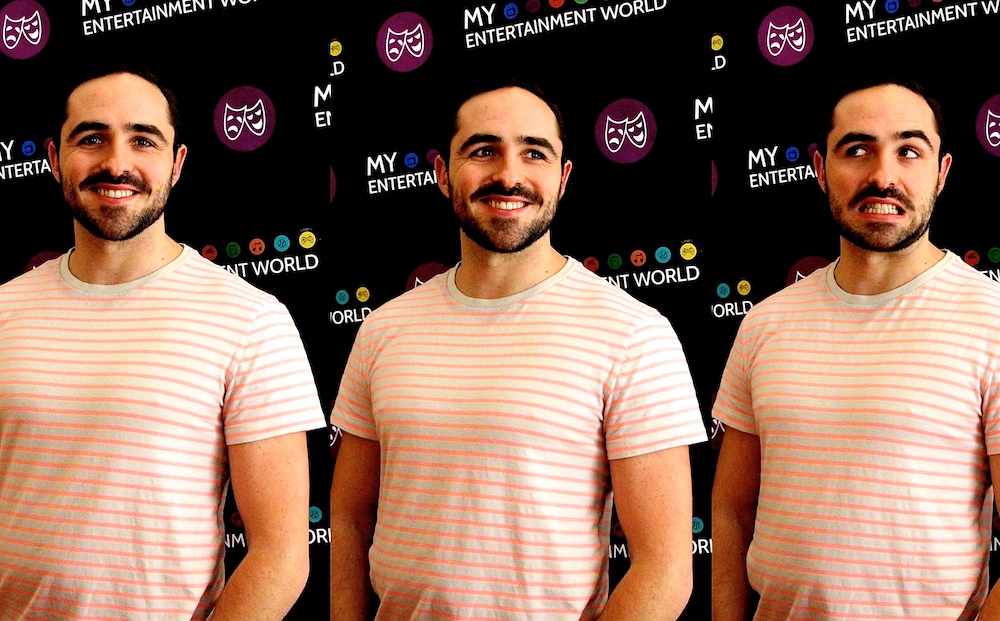 In VideoCabaret’s Confederation Parts I & II, programmed at Soulpepper last summer to celebrate Canada’s 150th birthday, the hilarious and versatile Jamie Cavanagh played lots of different roles in Michael Hollingsworth’s wacky and critical retelling of Canadian history. The range was incredible but the highlight was undoubtedly his Outstanding Supporting Actor-nominated turn as a larger-than-life but still deeply human Wilfred Laurier.

Can you remember the first theatre production you ever saw?
If I remember correctly, I would say it was like a St. Albert high school production of Peter Pan when I was a little kid. My cousin was in it, I believe.

How did you get involved with VideoCabaret?
In a really roundabout way. I had just gotten here from Edmonton. I’d been here maybe about a year, and I took a contract in Sudbury. On that contract were four VideoCab members and alumni, and so I made friends with them. When I got back, they had contacted me for an audition, so I made some sort of impression.

Take us a little bit inside the mechanics of VideoCab, and how you perfect the quick cut transitions, and the style.
Oh, man. The VideoCab way is all about man hours, and massaging and massaging and massaging. On our first day of rehearsal, we are in the lights, on the stage. So the set is built. We’re consistently getting props. How long did we rehearse – 12 weeks for this one? Constantly getting new props, new costumes, and so on. But 12 weeks of little tweaks – cutting, keep this head movement, lose this head movement, cut this character, add this character. Nothing is done in a hurry at VideoCab. You do it until it’s done. Until it is what it is on opening night, and even throughout the production, it continues.

The company has a hyper-specific style. How much of the character or the performance is an actor’s interpretation, and how much of it is dictated by “This is exactly what it is”?
I would say there are a couple VideoCab rules for performance, and those certainly assist in the style. An example rule is that you always have your chin up, further above what you would maybe normally do on a regular stage, which is exaggerated from real life anyway. But in a VideoCab, you throw your chin all the way up. Make sure the light catches your whole face. And you never look completely to the side. So if you look completely sideways, you’re looking with your eyes, and not your head. So just little things like that already add a bit of style, plus the makeup, plus the costumes, plus the music, and the gonzo humour and grotesque writing of the mad genius Michael Hollingsworth [playwright / director].

Speaking of the crazy costumes and wigs and makeup and all that kind of stuff, how much of a part does that play in the development of each character?
Pretty huge. The characters don’t really start solidifying until you start seeing yourself in costume and makeup. Around 8-10 weeks without costumes and makeup, and you’re fiddling around with voices, and accents. Trying it this way, try her that way, and as soon as you get costumes and makeup, like in every production, everything sort of takes a huge step forward. You relax a bit in all the decisions you’ve made. It becomes more like wearing the character as an everyday thing, versus a thing in progress.

All of the actors played multiple roles. How do the different characters inform each other?
I’m sure everybody’s got a different way. I’ll look at what characters I play the most, and I’ll try to make them the most different. So I play Wilfrid Laurier, and I play William O’Donohue, who’s the head of the Fenian uprising – the Irish rebels in early Canada – I might pitch their voice differently. Obviously, there’s different accents, so it’s going to be a different musicality. How does this person hold themselves? Trying to make the differences as wide as I can in the characters I’m playing most often.

It can also be hard, because in the characters you play most often, even though VideoCab still has this heightened style, you still want those characters that we’re going to be focusing on for long chunks of time to have an edible realness that’s not too sweet, that’s not too big and rich. You can be bigger and richer for the characters you only see once. But for a character you see in 20 out of 100 scenes, you wanna make sure that they actually have a real arc. Although they’re other-worldly, sort of other-dimensional, the audience can still follow them along, and care about them.

Was it based on historical footage of Pierre Elliot Trudeau, or was there something of Mac Fyfe’s impression of Pierre Elliot Trudeau from the VideoCab shows?
Actually, I never got to see Mac do Pierre Elliot Trudeau. So I did base it on mostly just watching the interview. I watched that over and over again. So I can’t actually comment on Mac’s Pierre Elliot Trudeau, but I hear it was spot on, and perfect. I felt a little bit of pressure that way, but also, I knew that I was putting this task on myself, and it may or may not be recognizable to other people what exactly I’m doing, but added a cool element to the character anyway.

Were you doing much research into the actual characters themselves to do an impression of them, or was it all sort of about finding inspiration in other people?
VideoCab has a rich library of Canadian non-fiction. We are encouraged to do a lot of reading. Also, of course, Michael has very big opinions about a lot of the people we’re portraying, so you can do as much research as you want. Michael has written this character this way. He or she serves a function in the play for this, so they have to be this way.

Like I said before, for the big characters that the audience are spending a lot of time with, it’ll be a bit more subtle. If you’re playing a character that’s a real person that only pops in for one scene, then all of a sudden you can take a little bit of liberty. Okay, they have this flaw. They’re a glutton. So now I can be a real glutton. A massive, overstatement of a glutton. Just because you don’t have to deal with it for too long.

Confederation, Parts I and II, which were playing in rep, are actually four different plays all condensed into two evenings of theatre. Was it difficult to convey that much story in such a compact way?
Absolutely. We lost a lot of babies in the 12 weeks that we were rehearsing, which we knew we would. I think when we first started rehearsing, each script came in around 2 hours 45 minutes, so we knew we had to cut half an hour to 45 minutes off of each one. We had lots of favourite characters go. We had lots of characters cut down in a massive way.

I’ve read the originals, but I’ve never seen the originals. I think, as you can imagine, as soon as you lose 20% of your content, that’s gonna be a hit in some way. But I don’t know. The struggle to fit it all in, lies more so on Deanne [Taylor, co-director] and Michael. I felt for them, because they were having to kill all their babies, and we were just sort of wilful companions in that.

The plays were programmed specifically because of the 150 anniversary that was happening around that time. Did you feel that the weight of that anniversary affected the productions, and how they were interpreted by audiences?
Yes, absolutely. It was certainly at the forefront of the cast’s mind, and the production team’s mind. In the rehearsal process, it was in the room. We relied quite heavily on Michaela Washburn for guidance and advice and leadership in that way, because we all wanted to make sure that we were all confident in our content. We knew the stance that the plays were taking was a positive one, and although it told the story of Canada, it kind of takes the glory out of it, and there’s a grotesque humour and criticism to it. So we all felt confident in the content, but we wanted to make sure we followed through correctly. I think we did a good job, and it led to a couple of really good talkbacks with the audience. We talked about it lots with audiences. So it was quite affecting. It was a relief.

You mentioned Michaela. Can you tell us a little bit about working with that ensemble?
There are very few rooms that are as fun and loving as VideoCab rehearsal. With lots of time, it means lots of space for everyone to take their time, and joke around, and be friendly with each other. We had potluck Fridays where everybody brought in a dish.

VideoCab really becomes like a family. It becomes very tight-knit, and familial. I’ve had great casts in my life, but the VideoCab casts are always excellent, and exceptional.

Did you have a favourite moment in the production?
I had two favourite moments. One of which was, for some reason, in the firstr play, when I’m playing Wilfrid Laurier and sort of coming into myself. I graduated and I’m coming into my own as a politician, rising in the ranks of the Liberal Party, and I give the Sunny Ways speech. His famous speech about being a good politician, and being a good leader, and a good listener.

Every time, at the end, I would be talking through this Aesop’s fable, of the sun and the rain. Effectively, the moral is that you win more bees with honey. And at the end, they say “the sunny way”. And there’s always, without fail, a pause, and then the audience would laugh at varying degrees, ten seconds later.

So that always got a laugh backstage. I always enjoyed that moment because I was sort of puzzled by it every time. Not to discredit the audience, but in that moment, it was always funny. It’s always interesting to see who gets the joke, or who’s pretending to get a joke, and that sort of thing. So it was one of my favourites. And I loved Louis Riel’s last speech, right before he gets hung, when he sort of stands up to the court and puts the government of Canada in their place, on the record. It was beautifully done by Michaela.

This is one of the early plays in the history of the village of the small huts, and as you mentioned, it goes a little past Trudeau. Is there a section of history that you’d be most interested in visiting with VideoCab?
Oh my gosh. The Cold War would be really cool. I think they just did Trudeau and the FLQ, but I would love to do that. Cold War would be awesome. World War II, I’d love to see that. Those would be the top of my picks.

What are you doing now, or what’s your next project?
Next project, I am doing lots and lots of improv. Doing that, and teaching that. I do a couple of weekly shows as well as a few monthly shows in town. That’s my big goal for this year. Work on a couple of short films. Do a lot of improv, and try to get some more teaching credits.