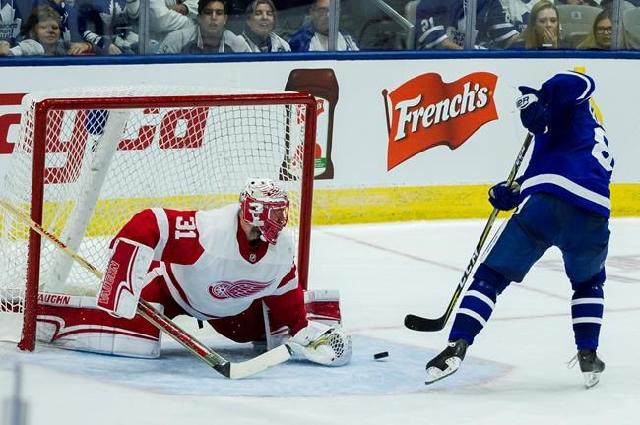 The NHL season is finally upon us with pre-season play wrapping up this Sunday. For fans, the wait has been much anticipated and this lead up carries a wealth of excitement and expectation (unless you’re a Habs fan, or Robby Fabbri). For the group of players league-wide sitting somewhere on the bubble, though, there will likely be some teeth grinding. The NHL should probably provide stress balls to players on two way contracts. They can be shaped like pucks. You’re welcome for the genius idea, Gary B.

I have to be honest – this preseason was a total blur for me. I’ve been swamped at work, opening a play I co-directed, and have only managed to catch recaps and streams of the games well after they happened. I didn’t get as clear a look at the full camp roster as I would have liked. Luckily, I’d entered the preseason with a plan. The play opened this past Thursday, and by Saturday night I’d be clear to catch the final preseason game at Ricoh. It was the last effort before the Leafs’ four day break heading into opening night. Surely they would be icing their full lineup. Babcock had other plans.

When it was announced that Saturday night’s lineup against the Red Wings would be the Leaf’s “second team” I was a little miffed I wouldn’t be seeing any of Matthews, Marner, Nylander (or my personal favourite: Gardiner. That’s right. Sue me.) in action. But I’m an optimist. I look for the silver lining. This game will allow me to see all of the players duking it out for those few coveted spots the Leafs don’t already have locked and loaded. Except for Rosen. And Borgman. And Moore. Regardless, I was pumped.

Here’s what I saw:

Kapanen deserves to make this team. He’s so fast, so dynamic, his vision and creativity opens doors for him every time he hops the bench. He made it pretty obvious he was the best player on the Marlies… uh, Leafs, tonight.

Fehr made a splash with a goal in the first to get the team on the board, but it was largely reactionary. I’ll give him full credit for positioning himself well, but I’m not sure he’s done enough to force his way into the 4C battle. He is magic in the shootout – apparently he lights it up in practice – and he capitalized tonight against Coreau who appeared to read Fehr’s move well.

Aaltonen didn’t look like he’s done enough to push Moore from the opening night roster. He’s a great depth player, and Babs has clearly shown a like for him the past two weeks, but I get the feeling he’ll be a Marlie come Monday. He was thrown on the penalty kill a bunch tonight in what I assume was an effort by Babcock to evaluate how much he would miss Moore’s presence when short handed.

Colin Greening had multiple chances early on in the slot and just couldn’t finish. There was never any real question where he’d be playing this year, but any shot he had at making the big leagues was extinguished with a lacklustre outing tonight.

Dermott still has a shot at the 6D or 7D spot, but he got into penalty trouble a few times tonight, and it was his blunder that allowed the Wings to score get on the board. It was his point shot that tied the game for the Buds with one minute to spare, but I’m not sure he was as solid as he needed to be to break past both Swedish imports for a spot on the third pairing.

Liljegren makes his presence known in the offensive zone but he’s very quiet defensively. Generally, that wouldn’t be a bad thing, as it would imply he’s playing a simple game and not making any blunders that would warrant our attention, but I’m really getting the feeling the Babcock is sheltering him with O-zone starts. He skates well, passes well, and after a year or two of development will be a welcome addition to the Leafs’ blueline.

Polak was clearly a fan favourite tonight. I’m thrilled to see he seems to be in good health, but he seems to be missing some of the flair he discovered late last year that allowed his stock to rise. Granted, he’s only played one game since coming back from injury, and it was this one, but I don’t see him playing in blue this season unless Lamoriello and company have major doubts about their young defenders. I wouldn’t be surprised if someone else picked him up on the cheap. I’m looking at you, Colorado.

Connor Carrick was a surprise addition to tonight’s roster, considering he’s widely considered to own the right side of the Leafs’ third pair. He looks confident. Poised. There isn’t much that’s flashy about his game, and an end-to-end rush showing skill I wasn’t aware he possessed almost ended the game until the puck ricocheted off the post. His being on this “B team” tonight puts into question his status as an 82-game defender for the Leafs, but only slightly. I wonder if Babcock is trying to instill a sense of hope into his young defenders vying for a job (as well as a hint of fear to the vets that their jobs might not be as safe as they assume).

McElhinney still scares me whenever he ventures outside the crease, and he almost gifted a goal to Detroit tonight following a failed attempt to corral the puck behind the net, but he seemed dialed in and ready to play. He showed strong lateral movement, and was tracking the puck well tonight. If he can remain consistent the Leafs won’t be hard pressed to expect 20 games out of him this year. He’ll definitely see action during Toronto’s 13 back-to-backs. I don’t imagine Andersen will start 69 games, so McE will have to figure in elsewhere, but if Freddy can stay healthy, Talbot proved last year that you can clear 70 games and still stay in decent form.

Leivo and Soshnikov are on the outside looking in. It seems a little heartbreaking for Leivo – especially since Matt Martin is occupying a valuable roster spot that he doesn’t deserve on a team with this much forward depth – to be shunned again. He’s too valuable to waive and let another club scoop him up for nothing, so we’ll likely see him in the press box with Fehr for most of the season. Fans love Leivo, and on any other team he’s be a solid bottom-six guy, but if an injury pops up and the Leafs need to throw someone in, Kapanen gets the first call from me.

Also, no Martin Marincin at either match against Detroit. Many pundits have hinted it may be an indication of an impending trade from Lou, but Marincin’s stock isn’t terribly high, and the return probably wouldn’t be much more than a late draft pick. This management team is pretty cunning, though, and if that goes down, Lou could flip that pick and a prospect (if we’ve learned nothing else from training camp it’s that the Leafs are in the rare position of having too many players to fill out their roster – if the right piece is coming back it wouldn’t be awful to let one go).

Lastly, the refs have dialed down the faceoff infractions, but they’re not backing down from their slashing calls, and it was the driving force behind both teams receiving eight minors throughout the game. The league is desperate for a scoring boost, and tilting the ice more throughout the game will probably help that (I say that now, but there was only one PPG yesterday). The clunkiness of constant penalties aside, the game seems faster than ever, and for the first time in years this Toronto club looks like they’re not only capable of keeping up, but could reasonably leave their competition in the dust.