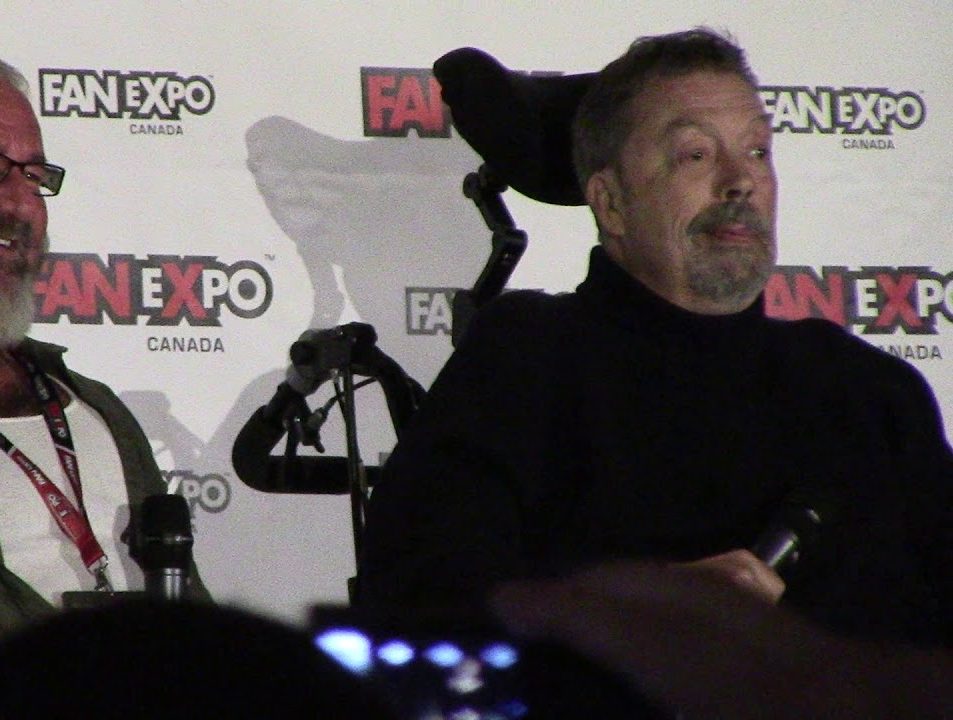 Sitting down to Tim Curry’s first-ever audience Q&A, I was filled with both antici….PATION and a bit of apprehension. Tim Curry is a rare type of performer; he excels at everything he does, in every form from comedy to horror to animation to whatever-the-fuck-you-want-to-qualify-Rocky Horror Picture Show­-as (other than SPECTACULAR) and has been a foundational part of my pop culture and professional life for almost as long as I can remember (Muppet Treasure Island and its sister film Muppet Christmas Carol are directly responsible for the style of my Shakespeare puppet company here in Toronto). He’s a living legend and has been a part of an embarrassment of cinematic riches…but lately, he’s also been laying low.

In 2012, Curry suffered a very severe stroke, following which he removed himself from the spotlight to recover (understandably). While his appearance as the Criminologist in the abysmal FOX Rocky Horror was a sign of his return, sitting in the auditorium, I was nervous. I’ve never met him, but I care deeply about him, and I was desperately hoping his recovery had gone well.

As it turns out, my fears were baseless and I couldn’t be happier to report that the razor sharp wit, wry charm, and overwhelming graciousness that have defined him were all on full display as Tim Curry, living legend (or living Legend, if you’ll forgive the pun), somehow surpassed who I’d hoped he would be. The result was a truly unforgettable Q&A that left me laughing, crying, and reflecting on the legacy of one of the greatest character actors of a generation.

And he did the Pennywise voice. Twice.

Moderated by Charlie Adler a long-time collaborator and friend of Curry (director of The Wild Thornberrys and acted alongside Curry in Hanna-Barbera’s Paddington Bear, where Adler voice Paddington and Curry the villainous neighbour ‘Mr. Curry.’), the panel achieved a rare feat: being better for being almost entirely fan questions (this is a tricky prospect…when it goes bad it goes BAD); but the amount of reverence and love pouring out of every fan on the mic was as astounding as it was well-earned. Wisely, Adler chose to hop in with questions based on fan question topics, covering important info while keeping the event fan focused. Curry was incredibly gracious and frequently moved by people who wanted to let him know how he got them into musical theatre. He thanked each one, very earnestly and it was an amazing thing to watch.

The whole panel was excellent, but here are the highlights that I scrawled down between applauding wildly, chuckling-to-laughing-to-guffawing, and crying. It was quite an hour.

I’d also like to point out that adorably, almost everyone who went up called him “Mr. Tim Curry.” I chuckled the first few times, but then realized that yeah, he’s one of those ‘only referred to with first-and-last name’ people, but people still want to be respectful…I think it’s actually pretty fitting. There was also a sense of awe that he had come to Toronto, with almost everyone thanking him profusely for coming. No one had expected to ever be able to thank him for his contribution to their life in-person.