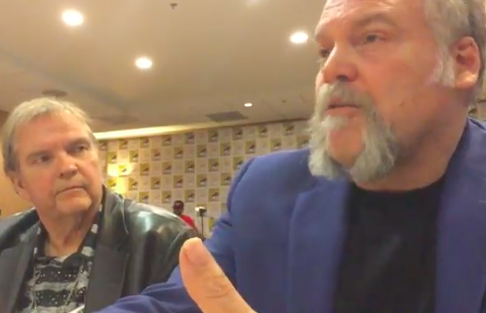 Step inside the Comic-Con press room in San Diego. It’s a loud, usually pretty disorganized, and often ridiculous place where reporters like myself ask TV actors and writers questions about the shows they’re working on. Sometimes those shows are new (like Ghost Wars, Syfy’s latest foray into the supernatural) so we’re asking questions based on just rough outlines and short trailers. Sometimes those actors and writers are names we know who turn out to be really personable, interesting people (like Vincent D’Onofrio), sometimes they’re people we’ve never heard of (like most people in this video), and sometimes they’re massive celebrities who’ve played a giant role in my life and whose appearance in front of me is a stark reminder that, at the end of the day, everyone’s always just human-sized.

Meat Loaf is in Ghost Wars. Meat Loaf is a big deal to me- Bat Out Of Hell is my favourite album of all time- and, no, he’s not what he once was, but he’s still fucking Meat Loaf, so show some respect. K, here’s some stuff about Ghost Wars–