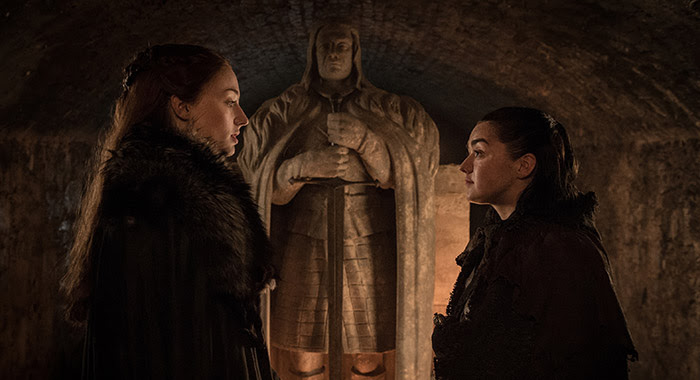 Game of Thrones: “The Spoils of War”

For a fifty-two minute episode, this week’s installment of Game of Thrones was, as Mary Berry likes to say, “cram-jam full” of goodies, gasps and guffaws. It seems as though the producers decided enough wasn’t happening, so they took everyone’s favorite Starks, put them in a castle to together, and tried to have Littlefinger around as the creepy uncle, Brienne as the fun aunt, and Podrick as that cousin everyone loves to make fun of. It also seems like we had a major battle sequence (properly done for once) featuring principal characters on each side and it seems like Jon Snow and Dany might accidently be Les Cousins Dangeroux (minus George Michael).

But let’s go back to Winterfell, back to the beginning, because that’s very clearly what the show wants us to keep in mind. We started with the Starks making up the bulk of our story, with principal characters aplenty and lots of excellent supporting characters to pepper the backdrop. Now, as Arya returns (with much less pomp than Bran’s wheelbarrow), the camera lashes us to her eyes, taking in her home that isn’t a home, not anymore, not really. It’s where she was a girl, but now she’s something else entirely, and it’s very clear that the walls are too small for her here. Literally. In earlier seasons, the camera follows her low to the ground, to show how truly small she is. But now, Arya is made taller by what she’s been through, the many she’s killed to get back home. And the wan smile in the corner of her mouth isn’t her being glad to be home (not entirely, at least) – it’s recognition that she needed to be here, but she’s not going to stay for long.

On the more macroscopic scale, what we have in Winterfell now is a very crude approximation of what we had in seasons two and three in Kings’ Landing, with the Lannister children in the Red Keep getting up to political shenaniganry. You had blackmailing, intrigue, farces, lies, and lots, lots of sex. In the North, we have three children, one of whom spends his time spouting random segments of visions and being pretty rude to girls (sorry to see you go, Meera). Bran’s presence is significant to the power structure of the Stark clan, which is why Petyr Baelish is so eager to butter him up, but his lack of interest, his apolitical nature, makes him fairly aloof to the audience, and untrustworthy for Sansa. He becomes someone she can’t rely on, another variable she’ll have to account for.

But Sansa’s a lady, born, bred and true. She plays the part very well, keeping busy and organizing for the arrival of winter. She is displaying an inordinate amount of skill before Arya shows up and displays an extraordinary amount of skill. The very cute play-fighting with Brienne (they’re best friends, I don’t care what anyone says) tells us so, so many things. We see Arya at the height of her abilities, forcing Brienne to step up her game and boot the daughter she swore to protect right in her teeny tiny chest. We see Brienne’s loyalties being tested, as she certainly has the potential to feel a greater kinship with the plucky Arya than the lofty Sansa. We see Sansa struggling, too, on so many levels. She’s happy to have her family home and safe, but with Jon gone and the power vested in her, she’s not sure how her younger siblings will respect her power. Arya is notorious for saying and doing what she pleases, traits that do not bode well when Petyr Baelish is around.

There are levels, to be sure, but it’s still such a poor imitation of the Lannister politics from earlier seasons. There’s not a lot of wit, the supporting cast has all but disappeared (as Arya pointed out when she walked in), and the only thing the Stark children are really united in are distrusting Baelish. At least with Cersei and Jaime we have sexual intrigue and disturbing master-servant relationships to comment on. With Tyrion it was witty banter, Bronn and Shae to liven things up. The wittiest we get in Winterfell are slapstick-esque castle guards and a super cheeky Arya bandying with Brienne (no-one, huh?).

But hey, Daenerys burned down a wagon train, so that’s cool, keep distracting us from the fact that you’ve written a season where you’ve killed the audience’s favorite political players. The common argument is that there’s no more time for cleverness, Cersei’s out for blood and the White Walkers are coming, but the audience loves Game of Thrones for the cleverness, for the manipulation and skillful diplomacy. No one wants the pen to be mightier than the sword, because without the sword things are rather dull. But they need to start working together rather than fighting for the limelight.