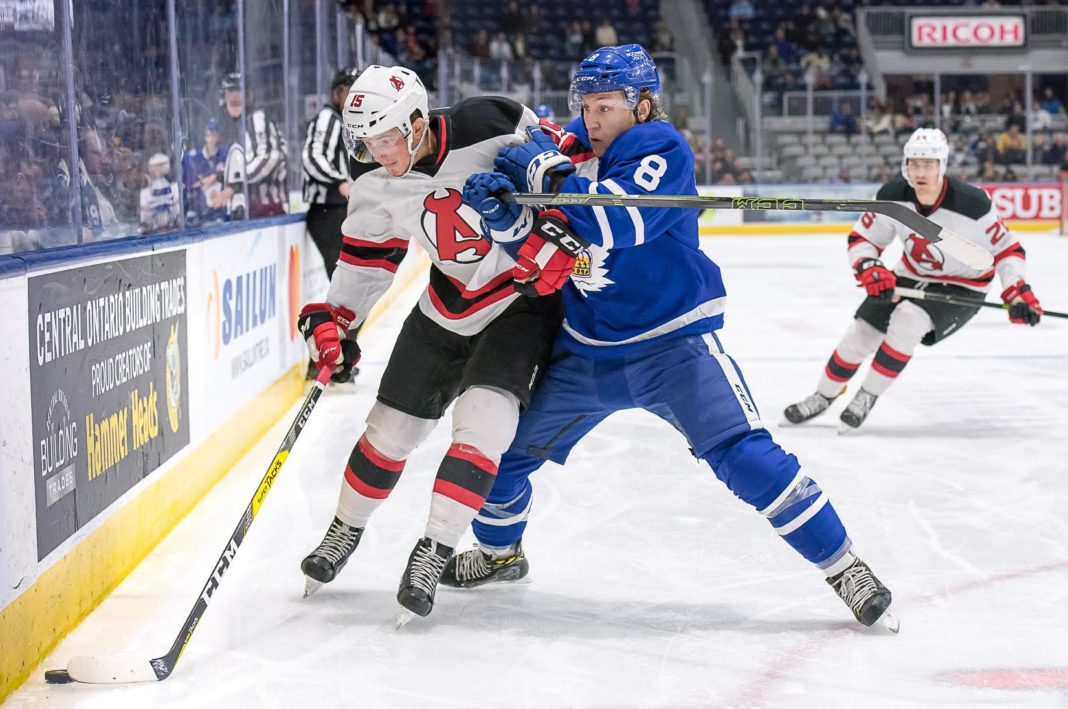 Guys. I was at the Marlies game Friday night, and Toronto managed to close out the series in four. What I couldn’t have foreseen before puck-drop was that we were preparing to witness the longest game in Marlies’ history. You would think the farm team has been largely depleted thanks to the Leaf’s rookie-heavy roster, but that’s certainly not the case. Matthews has never suited up in the AHL, and Marner spent all of last season with the OHL’s London Knights. The team might miss Nylander up front, but his promotion to the big time has opened up room for Brendan Leipsic and Kasperi Kapanen to step into the spotlight.

Speaking of Kapanen, he was flying off the bat. His time with the Leafs – short as it was – looks to have exploded his confidence (and justifiably so considering his goal against Pittsburgh captured a playoff spot for the team, and his OT goal against Washington evened the series at ones). Sprung by a beauty pass from Leipsic, he powered to the net but took an elbow to the head in the scramble. Play went on, but all eyes were on the bench as Kappy conferred with the trainers and shortly afterward left for the showers.

The Marlies dominated at even strength, breaking out of their own end well and working the cycle in the attacking zone. By the end of it all they had fired 60 shots on Malcolm Blackwood (remember him from the WJC a few years back?), doubling Albany’s shot total and displaying just how much the ice was tilted for a majority of the game, even despite Kapanen leaving early.

To be honest, I spent most of the game with an eye on the Marlies back end. While I like Dermott’s play – he’s mobile, has great vision, and would be a solid third pairing guy for an NHL club next season – I don’t know where he fits into the Leafs D-unit. I’m hearing a lot of talk that one of Hunwick or Polak will be back, and while I like what Polak brings to the room (down the stretch he was really solid for the team, and his absence in the playoffs hurt us) his injury scares me. I think Hunwick gets resigned (unless Lamiorello makes waves this offseason and they can find a way to flip JVR or a prospect like Leipsic or Kapanen to a team in need of offense but with a wealth of young defensemen – I’m looking at you Hurricanes) but Dermott is also a left shot, and we all know how much Babs loves to keep his left shots at left D and his right shots at right. Holl is probably the righty most likely to get the call, and while he grabbed the OT winner, I don’t see him solving any problems for our defensive core.

Calle Rosén and Carl Grundström are both lefties, so that doesn’t help the balance either. The number of left shots in the league right now (or in our system, at least) baffles me. There were moments last night where 8 of the 10 skaters on the ice were left shots.

We also discovered that the bar stays open during overtime, so that was pretty excellent. A beer a period seems like a dynamite idea until the game is going into the sixth period and you’ve been buying those 28oz monsters.

The Marlies face off against Syracuse for Round 2! Game three will be at Ricoh Coliseum on Tuesday, May 9th. You think the empty seats at Canadian Tire Place for the Sens-Rangers game the other night was bad, Ricoh was only about half full yesterday. Hope to see you there to cheer on the boys in blue!