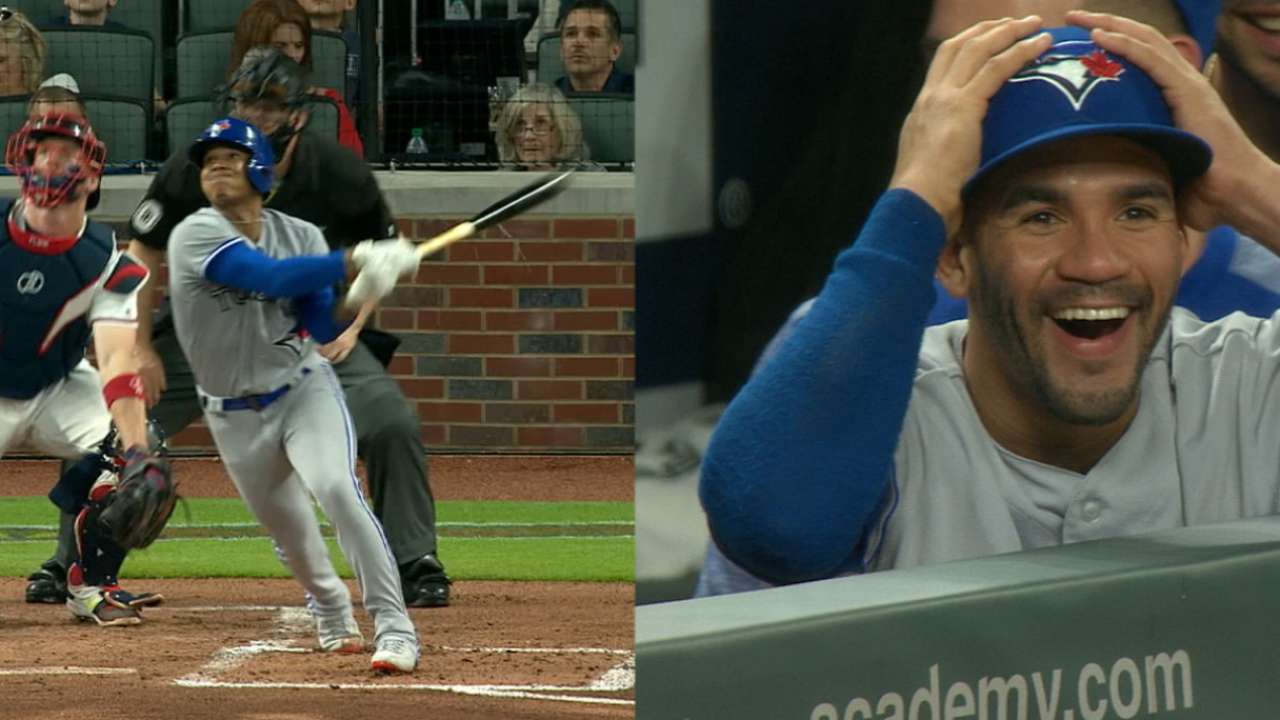 Well, the team nobody likes today had their easiest win of the year tonight. After about the fifth inning, I started to flip between the game and a sweet Seinfeld repeat on Peachtree TV – the mail fraud one.

“Jerry, these big companies, they write everything off.”

“You don’t even know what a write-off is.”

“But they do. And they’re the ones writing it off.”

Speaking of comedy, any time Luke Maile, Darrell Ceciliani and Marcus Stroman hit a home run in the same game, you’d better win that game. I actually believe there is a little-known rule in the MLB handbook stating that if three ‘hitters’ of that level all go deep in the same game and the team still loses, that team is immediately relegated to AAA. Starting tomorrow, I could have been writing this column for the rest of the year about the newly promoted Toledo Mud Hens. It might be a welcome change.

By the way, is there anything more 2017 Blue Jays than having Darrell Ceciliani batting cleanup, hitting a two-run double in the first inning, launching a home run in the third inning and then somehow injuring his trail shoulder on that swing and having to leave the game immediately afterward? I’m just waiting for someone on this team to come down with a stinging case of Hookworm.

With all the fallout from Kevin Pillar’s poor judgment, Jose Bautista’s bat flip and Freddie Freeman’s unfortunate injury yesterday, this game turned out about as positively as the Blue Jays could have hoped. Atlanta starting pitcher Julio Teheran hit Bautista on the leg (eventually) in his first at-bat, Jose took his medicine and quietly jogged to first. The umpire issued a warning and the game settled down and became a laugher pretty early. (The two pitches Teheran threw at Bautista were the hardest thrown fastballs he threw all night, incidentally, which tells you how charged up he was about it.) Whether the task of plunking a batter was weighing on Teheran leading up to the game is impossible to know, but he was clearly not at his best tonight despite having a chance to lead his team to a four game series sweep the way the Braves would expect their erstwhile ace to do.

BASKING IN THE GLORY
(after each win, three things that might have been the difference.)

A BIG PLAY- On a day when there really wasn’t much to like about this Blue Jays team, having Darrell Ceciliani batting cleanup just felt like the cosmos was rubbing karmic rock salt in Toronto fans’ open wounds. However, in the first inning, after Bautista was plunked and Kendrys Morales advanced him with a single (against the shift!!), Ceciliani promptly doubled Bautista home and then scored on Chris Coghlan’s double immediately afterwards. Getting such a weak-looking lineup off to a 3-0 lead before Marcus Stroman even hit the mound was a big relief for a team that had spent the last 72 hours drowning in negativity and controversy. You could almost feel everyone in the visitor dugout’s shoulders collectively drop.

A BIG MOMENT- There weren’t many significant turning points in this blowout, and this moment is really only memorable because of the infinitesimal percentage possibility of it happening, not in the sense of it affecting the game much at all. With the score already 6-0, Toronto catcher Luke Maile, who entered the game with an .056 batting average and an .056 slugging percentage, hit a home run to left field. As though this were not enough of a Halley’s Comet-level moment, five pitches later Jays pitcher Marcus Stroman hit a home run to opposite field to make this a true flaming pink unicorn of a baseball game. In fact was the first time in the history of interleague play that an American League catcher and pitcher hit back-to-back home runs in a game.

…AND A LITTLE THING- Stroman was removed from the game after just 5 2/3 innings despite having a 9 run lead and being generally in command for the entire game. Though he was confused by his removal, I suspect it was to keep him well-rested because his hitting has made him the front-runner to be the Blue Jays’ starting second baseman for the four games in between his starts.

There is nothing positive to be taken from Kevin Pillar’s actions in the seventh inning of yesterday’s game. Not yet, anyway. It is a low point in a season plump full of low points. I am at least encouraged that his apology contained no horseshit qualifiers like “if I offended anyone”, as though he somehow didn’t realize why what he said was so terrible. ‘Pleading ignorance’ excuses are pretty common from athletes (and celebrities and politicians) who get themselves into trouble with their thoughtless words, subtly inferring that the blame lies with societal hypersensitivities rather than firmly on their own shoulders. Pillar was at least (those two words again) sincerely contrite enough to accept his culpability completely, admit his choice of words was abhorrent and understand that he will justifiably face consequences. This story will not have a TV movie happy ending any time soon, but Pillar at least (!) appears to have begun the process of repairing the damage with genuine humility and accountability. That’s a start. The strikeout moment with Jason Motte will always be a blemish on Pillar’s bio, but the hope here is that he can deal with it the way Roberto Alomar dealt with his infamous spitting incident with umpire John Hirschbeck – where some growth, maturity and mutual understanding can come forth as a result. Kevin Pillar strikes me as a mentally tough person and if he continues facing up to his mistake with the proper attitude and approach, in time this incident could be remembered merely as the black mark that Kevin Pillar grew up from, and not the black hole that his career fell into.