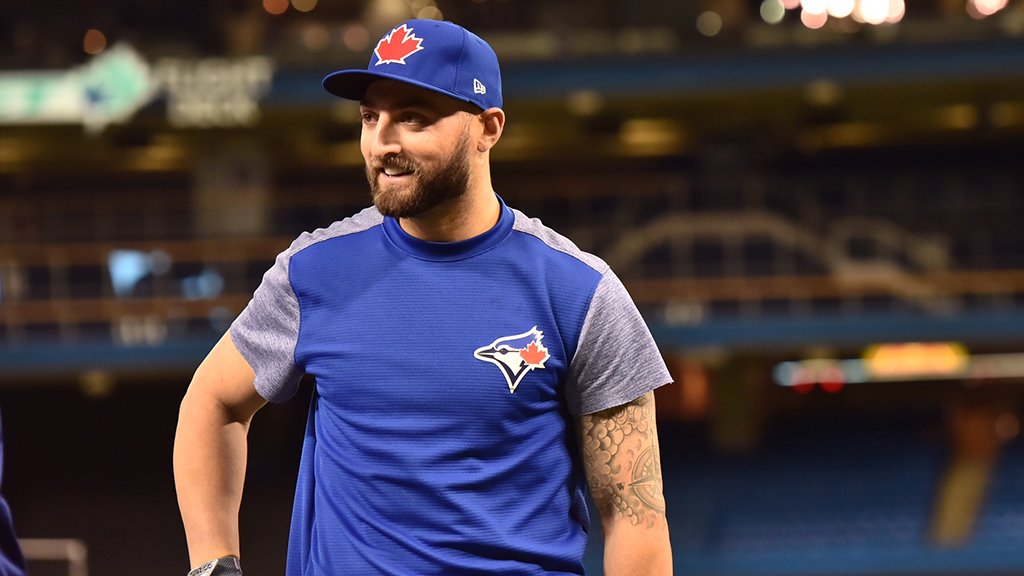 After being bludgeoned by one of the worst offences in the major leagues for the last two games in their home park, the Blue Jays’ pitchers again turned the ’17 Braves into the ’76 Reds tonight. This game, Toronto’s first ever at Atlanta’s new tax g0uge ball park, was over before a single Atlanta batter got out, and the vexing part is that the Braves didn’t even have to do much to lock it down. They just let the Jays do it to themselves.

After raising expectations for the future with two pretty strong abbreviated starts, Joe Biagini showed he is human tonight, falling apart at the seams in the first inning after making a critical error and not recovering himself until it was already too late. With the Blue Jays fielding an ‘everyday lineup’ that is as weak as any they’ve had since the late 1970s, falling behind 6-0 in the first inning simply makes winning games next to impossible. This sad sack current starting eight (no DH in National League parks), with maybe two players who could start for a first division team, has actually scored 16 runs over the last three games, but they simply lack the firepower to make up for terrible pitching and defence and in the first inning tonight, Joe Biagini provided too much of both. After so much of his young MLB career has gone fairly smoothly, perhaps he was overdue for a night like this – “The Gods of Baseball” and all that nonsense. His forthcoming autobiography, “I Was Eccentric And Liked To Let The Media Know About It”, will likely not recall tonight’s game fondly.

While they are likely the weakest lineup in baseball right now, the Jays’ starting nine are at least reputed to be solid defenders. That was not the case tonight, either. Not even close. Three errors and a ghastly play-not-made by left fielder Les Nessman sealed this one up. Atlanta will undoubtedly be soliciting the schedule makers for more of these ‘rivalry’ interleague games in future seasons. Who could blame them?

If Joe Biagini COULDA just done as you’re taught in PFP and thrown the ball to the base instead of worrying about who’s going to catch the throw, he starts a taylor-made double play and his six-run first inning disaster does not materialize. Usually preternaturally calm between the lines, Biagini fielded Brandon Phillips’ comebacker, then turned to start the DP and saw that both Ryan Goins and Devon Travis were racing to cover second base at the same time. That image screwed up his throwing rhythm, and caused him to nearly lob the ball over Travis’ head, with both runners ending up safe instead. Visibly rattled and upset with himself after his error, he walked the next two batters, then allowed a bases-clearing double and a home run before Braves hitters started to get tired and feel sorry for him. By then it was far, far too late.

Ezequiel Carrera WOULDA really helped Biagini out if he had not trotted out his drunken kangaroo impression while ‘attempting’ to catch Nick Markakis’ ball down the left field line in the first inning. On a play like that, Carrera should have run to the fence, found the wall and then make an attempt for the ball. For a player with a right-handed glove, this was a far more catchable ball than the tornado of ineptitude he turned it into. I’m not entirely sure what his thought process was on this play, but don’t let your children see the replay – it is deeply disturbing and might cause nightmares. If that ball is caught (ha ha) and Zeke’s party tricks are saved for another part of the game, the inning likely does not unravel as badly as it did, perhaps keeping the game within striking distance for the Blue Jays.

There are some fans who are constantly trumpeting for Carrera to be an everyday player on the Jays and can’t understand what baseball folks mean when they say he’s probably just a fourth outfielder on a decent team. Those fans SHOULDA seen him run the bases in the fifth inning tonight. With runners at first and second and two out and the score now 6-3, Justin Smoak hit a slow roller to third base that Jace Peterson would not have been able to make a play on. Instead of simply steering himself behind Peterson to touch third safely and load the bases, Carrera rammed into Peterson as he attempted to make the play, getting himself called out for interference and ending the Jays’ last realistic comeback shot of the game. How you can be a 30 year old player in the major leagues and not know that the fielder has the right of way while attempting to make a play is beyond comprehension. Playing every day due to injuries is exposing why three other teams gave up on Carrera and is highlighting his flaws through overexposure. Put in the right situation, he can help a team. 500 at-bats in a season is not the right situation.

I think I’d be a little pissed, too if I were Kurt Suzuki after Jose Bautista’s gratuitous bat flip to celebrate a meaningless solo home run that made the game 8-4 in the 8th inning. There was no reason for him to be standing there and admiring it or for flipping the bat. While I like that Bautista spoke to the Braves catcher after he touched home plate and seemed to accept culpability and diffuse the situation, it was nonetheless a graceless move by the struggling slugger. Jose Bautista should know better than anyone when the right time is to celebrate a big home run. Hitting an insignificant solo shot when your team was losing by five runs in a game in mid-May while you’re hitting .208 and your pitchers have hit 7 Atlanta batters the last few games is definitely not that time.

He’s an imperfect player, but I don’t recall many second basemen who have made more flashy great plays in their careers than Brandon Phillips. He made another beauty tonight, barehanding a catch and throw in the sixth inning to turn a slick double play on Ryan Goins.

Not sure why Kevin Pillar was so upset after he was struck out in the seventh inning by a quick pitch from Braves reliever Jason Motte. With no one on base Motte has no obligation to come to a complete stop and Pillar was clearly settled in at the plate. It is exactly what Marcus Stroman has been doing this season. I suspect he was just letting a frustrating few days get to him. Imagine how those of us who had to watch this mess feel.

This was, frankly, an embarrassing game to be a Jays fan. A shamefully feeble starting lineup that somehow failed to meet even the modest expectations set for them, committing three errors, making boneheaded plays and then behaving like dicks. This was not the situation I was hoping for after watching the sweep of Seattle and returning from Pittsburgh (which, by the way, has the nicest ballpark in MLB – highly recommended. I suggest you find out when Toronto is playing Atlanta next season and take a road trip there during that exact time. Just make sure you go for the entire series, otherwise you’ll wish you were still there.)

Special thanks to my buddies Geoffrey Pounsett and Adam O’Byrne for their outstanding contributions to this blog in my stead over the last few days. It was a nice treat for my readers to have a chance to see some intelligent writing for a change.