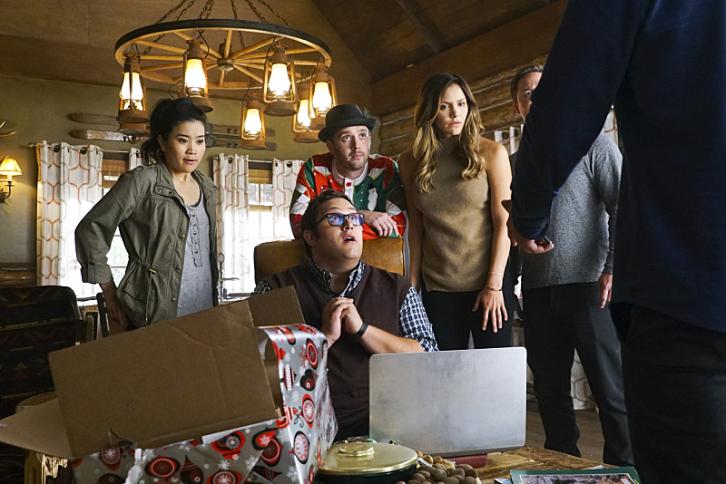 We’re grading on a curve here because, well, you’ve seen a CBS procedural, right? They’re outlandish, over dramatic, formulaic and cheesy- those are the rules and, while they can be worked around, they are never truly broken. So, grading curve, keep that in mind as I proceed to tell you that Scorpion is intermittently pretty damn delightful.

First of all, I love me some geniuses. They make great TV characters- especially procedural characters- because the audience never gets ahead of them. I had a family friend who used to diagnose House patients within the first ten minutes of the episode and I can always spot the Bones killer but Walter and co. are reliably ahead of me, at least when it comes to solving problems once the problem is upon them (the geniuses have a terribly naive tendency to assume their innocent holiday plans aren’t going to devolve into a life-threatening mission that only they can take on; silly geniuses).

Scorpion‘s done a great job of developing their team dynamic and it’s one of the few procedurals with a pretty good balance between ensemble members. Walter (Elyes Gabel, whose charm keeps the character’s narcissism just on the right side of annoying) may be the team leader but Happy (Jadyn Wong), Toby (Eddie Kaye Thomas) and Sly (Ari Stidham) share plenty of the load and steal most scenes (the show is best enjoyed by ignoring Katharine McPhee as much as possible; Robert Patrick is also there and sometimes has a good one-liner).

Standard operating procedure for a show like this allows for maybe 5  minutes of character storytelling on either end of the mission of the week. There are only so many good ideas out there for fun, high-octane missions (so far this season a hijacked submarine was pretty cool but the bat cave episode not so much) so the show really lives or dies on how much they can make us care about the characters with only those 10 or so minutes per episode, unless they manage to work a little personality into the mission like Walter’s oxygen-deprived ranting in the space capsule episode or the team’s insistence on torturing nervous Sly by making him go undercover on a weirdly regular basis. The strength of Wong, Thomas and Stidham is key here. They’re all incredibly easy to root for and the Toby/Happy romance has been a treat to watch develop. Thomas is a comic gem and his prickly vulnerability as know-it-all behaviourist Toby is creating fascinating sparks when pushed up against the steely intensity of Wong’s guarded engineer. I’m hoping the newfound steadiness of their relationship doesn’t push Toby and Happy to the background like stability did for Hodgins and Angela on Bones (time was Hodgins was the heart and soul of that show, then he barely seemed to exist anymore). With the Megan storyline fully wrapped, Stidham this season isn’t doing much of interest (he’s running for office but who knows where that’ll go) but he’s a clutch player on the show simply because he’s adorable and this show needs a little adorableness.

The central love story between Walter and Paige (McPhee) developed waaaaay too quickly and the show is already out of conflict for them, especially with the recent departure of Tim Armstrong, the ex-Navy Seal who fell for Paige and made a great foil for Walter without being a bad guy (and you can’t go wrong with Scott Porter, ever). It should have taken Walter years to slowly warm up and open up to Paige but he’s been all-in for nearly 2 seasons now and there are only so many new excuses the show can come up with. Like I said, best to ignore McPhee; Wong and Thomas are enough of a love story for 3 procedurals.

The state of Scorpion‘s never going to be all that different from the last time I wrote about Scorpion. It’ll be a keep-on-keeping-on show for as long as CBS needs it to be, which could very well be a decade at the rate that network cancels procedurals. The first half of the third season has been fun and Scott Porter-y with plenty of Happy/Toby material to keep me happy (and toby). There’s nothing really on the horizon or even on the backburner that looks to be of much interest but that genius garage is a cute enough place to crash while you wait for someone to have a clever idea.