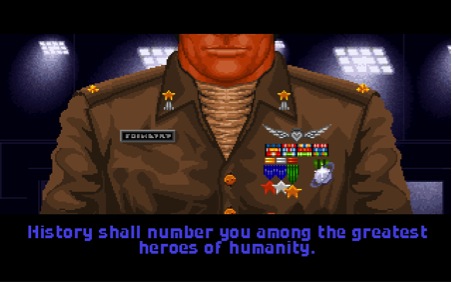 Recently I’ve been playing Elite: Dangerous, a free-form space combat and trading simulator that is a modern update of a classic 80’s PC title. My dad’s enthusiasm for Elite and recent retirement from work has resulted in hour-long phone calls and emails full of screenshots and spreadsheets. My dad never taught me how to drive but he taught me how to fly space ships and, in the next few weeks, I’ll be covering the games that he introduced me to in roughly chronological order. These titles, along with the time we spent at the movies in the 90s and early 2000s, made a cataclysmic impact on my values as a storyteller.

I’m four years old. I’m sitting on my dad’s lap in the basement of our house in Barrhaven and he’s playing a game on our computer that is terrifying me because he’s so, so bad at it.

The game is the original Wing Commander, an ambitious ‘space combat simulator’ that piles cinematic flair onto a relatively simplistic gameplay loop. Developer Chris Roberts took the same WW2 dogfighting films that inspired George Lucas and made a whole game out of them. Like the real pilots of the US Navy in the Pacific and the pilots of Roberts’ own RAF, the player is no mystical warrior or chosen one. Instead of Luke Skywalker, we are Wedge Antilles: an exceptionally talented but otherwise ordinary fighter pilot in space. The Star Wars answer to Wing Commander, X-Wing, was three years away, and WC borrows liberally from those WW2 films, real US Naval traditions, Larry Niven’s Man-K’zin Wars novels, and the diversity of Star Trek to create its own flavour that, even 25 years later, I find intoxicating.

My dad, who left the dangerous world of outdoor boiler making in northern Alberta to learn computer repair, has always been a dreamer and a tech-head. He scoffed at Nintendo’s consoles and it’s easy to see why: Wing Commander‘s full-colour cutscenes, vibrant characters, bombastic musical cues (which changed depending on the action, a novel trick at the time) and smooth action made Mario look like he was standing still. The SNES may have matched the visual punch of the DOS market at the time, but there was nothing on the planet that matched the cinematic storytelling of Wing Commander.

In Wing Commander, everything is exciting and atmospheric. The ship’s bar grooves with MIDI beats, water drips from the ceiling of the barracks into a bucket with a synthy ‘bwip’, and the briefing room is a moody, red-tinged nightmare with a bass-y score that explodes into frenzied closeups of pilot’s boots and faces in silhouette as they race to their cockpits.

A brief animation unique to each starfighter shows your character strapping in and putting his helmet on, before you rocket out the launch tubes in first person. It’s exhilarating, iconic stuff, and Roberts’ use of the camera in 1990 is decades ahead of video game storytelling. Instead of wide shots with text overlays, Roberts uses medium framing to paint the broad strokes of a room before zooming in to closeup when the player clicks on a hotspot.

In the bar, Shotglass the bartender wipes down counters and glasses while two chairs, underneath the killboard, hold a pilot each, a member of the squadron who the player will eventually fly with, each with their own personalities (since characters could die in combat, their chairs would be empty if they had been killed). These personalities are hinted at by the idle animation that plays while the players sit in the wide: Iceman, the grizzled veteran, polishes an old pistol. Knight, the meek but reliable South African, contentedly eats a meal. Spirit, the player’s rocksteady first wingman, plays a silver guitar. Each of these characters pulse with life and some are instantly recognizable by the animator’s use of famous actors as templates. Iceman is a dead ringer for Clint Eastwood and, in Wing Commander 2, Sean Connery was obviously used as a basis for Paladin.

Once in the cockpit, the camera is locked onto your character’s head and you see the action through his eyes. Each fighter has a unique cockpit layout and the information you need is displayed on the monitors and gauges therein. You can even use the F keys to look left, right, and back to track targets through the canopy. Part of my terror at this game is that, when my father would die, the game cuts to a reverse shot of the player character throwing his hands up in front of his face as the cockpit bursts into white light, then shows the exterior of the ship exploding. It’s jarring and sickening and, when accompanied by my father’s jump in terror, was very affecting as a young man. Once I convinced dad to let me grip our black and red Gravis joystick, I found I was a natural and quickly outpaced his progress. (We’re pretty sure he never beat the first mission which, to be fair, features a flight through an asteroid field that is still a pain the ass.) A later iteration of the series, Armada, featured an early multiplayer mode and I would jump into the hotseat for a few rounds to get Dad’s score up until his friends cried foul.

The immersion of Wing Commander set the tone for all my stories for years to come. The nineties were also the era of the stuffed box and WC was no exception: in addition to the huge black floppies that contained the game, the box featured full-size blueprints of every human fighter and an issue of the on board magazine, Claw Marks, featuring stories, lore, profiles of the characters, and a history of the 20-year war between humanity and the Kilrathi. I pored over those documents and I still think it’s one of the best examples of world building ever made and I would later, unwittingly, become a huge fan of one of its writers: Star Wars novelist Aaron Allston, who wrote the Wraith Squadron series.

Wing Commander is still my answer when I’m asked what my favourite video game is. While the arguably superior TIE Fighter has it beat in terms of mission depth, that game borrows liberally from WC‘s storytelling, especially Wing Commander 2‘s traitor subplot. The series would be a major feather in the cap of Origin Systems until Roberts left the games industry to make movies. Roberts’ disastrous adaptation of his flagship franchise would kill his career as a director, but it nevertheless has a place in my heart for parts of its visual aesthetic, essentially Das Boot in space, which would be used to great effect in Battlestar Galactica ten years later. Roberts is back leading Roberts Space Industries, whose majorly successful crowdfunding effort to develop Star Citizen has been fuelled by the dreams of former Wing-nuts who still dream of their time in the cockpit of a Rapier.

Wing Commander would lead to a number of sequels detailing the continuing adventures of your character, (Finally given a name, Christopher Blair, when the series jumped to FMV with Wing 3, though the player was still free to select a callsign.) but also spawn a variety of spin-offs, each an experiment in bolting a new genre onto the reliable space combat framework.

Wing 4– The Price of Freedom has the most sophisticated story and was the first video game to use real sets instead of green screens. It was the Titanic of video games and cost $12 million to make. It tells a surprisingly mature story about aging, PTSD, and the cost of peace after decades of war. It is also a video game in which you shoot lasers in space.

The most successful sequel, Privateer, will be explored in a future instalment of this series as it, far more than the original WC, captured my father’s and my imagination for years.

If you’re a fan of Wing Commander or if this article has peaked your interest, you should check out wcnews.com which somehow manages to write a news post about WC every day, and GOG.com where you can buy the entire series, optimised to run on modern PCs, for less than $50.