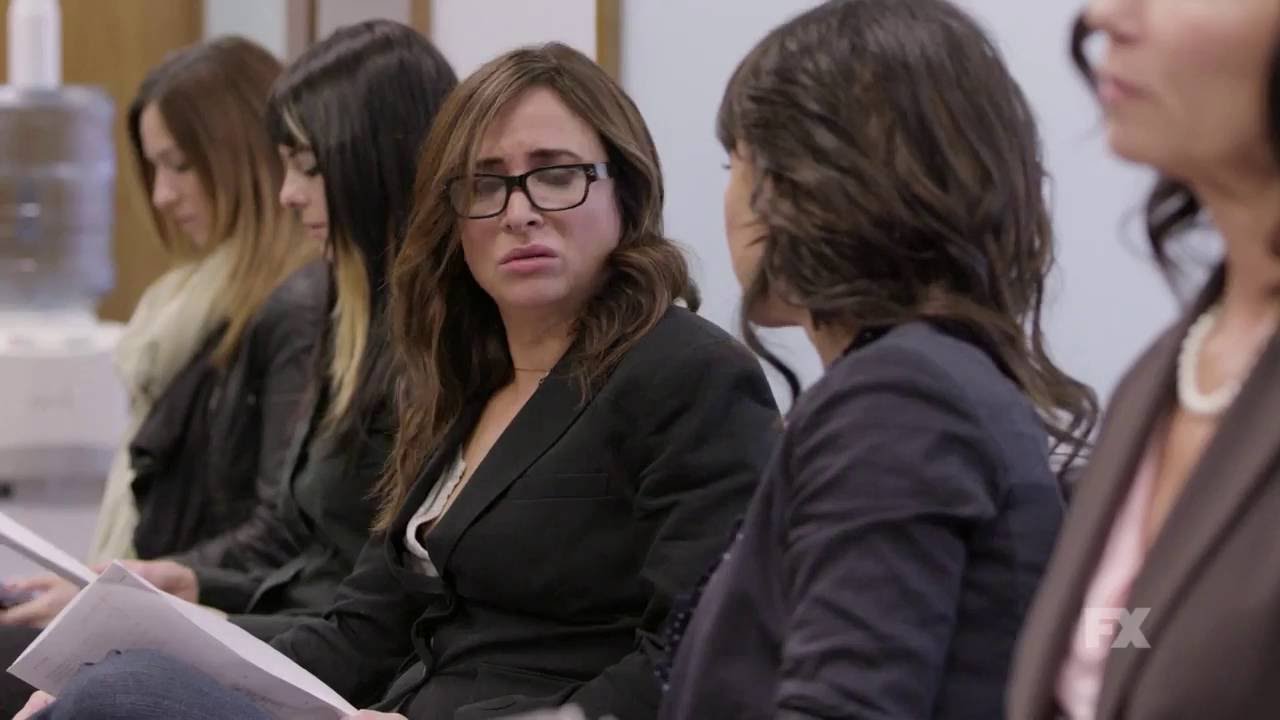 There’s still a lot we don’t know about Pamela Adlon’s new half hour show on FX but I’m pretty sure it’s already great. We know she’s one of Louie CK’s most consistent and trusted collaborators (she played his love interest on both Louie and Lucky Louie) and they’re making this show together (he directed the first episode that they co-wrote). We know she really does have three daughters (the show is dedicated to them) and a prolific voice-over career (Rugrats, Recess, Pepper Ann, many many more) but Adlon does not appear to be playing herself. Or, rather, she completely appears to be playing herself (down to the fact that she surely sees doppelgänger Constance Zimmer at every audition she goes to, only to both lose the part to fellow Boston Legal alum Julie Bowen) but here her name is Sam and she is technically not playing herself.

That small, mostly symbolic, step away from reality gives Adlon the freedom to borrow as much from her own life as she wants without any sort of duty to the literal truth. The emotional truth is another matter; the achingly human pilot suggests the show will come through on that front no problem, accurately depicting life without necessarily broadcasting it exactly as it happened.

Because she’s not technically Adlon, we don’t yet really know who Sam is. The pilot reveals a solid but not soaring acting career, relentless dedication to her daughters, a sense of down-to-earth realism that’s applied across most of the board from dealing with temper tantrums to blowing off the sad dad she’s been sleeping with, and a small glimpse into a past love she can’t quite shake (was that Ron Livingston? IMDB doesn’t seem to know yet). But that’s all we’ve really got so far. We don’t even know for sure if Bradley Whitford (seen co-starring in a very explicit TV show with Sam) is really Bradley Whitford or some other fictional actor. Is Constance Zimmer actually Constance Zimmer? At least Julie Bowen is definitely Julie Bowen.

The most thrilling scene of the enigmatic but promising pilot is its simplest- a short text exchange between Sam and a man programmed into her phone as “nobody” (Ron? Maybe?). Quick cuts of blurry happiness are interspersed between close-ups of Sam’s phone-

Then the most tense and heartbreaking scene of television this week ended with three little dots appearing and disappearing.

It’s that sort of tiny, relatable moment that suggests to me that Better Things is going to work. That, and I trust Louie (and, by extension, Pamela Adlon, though I don’t yet know her well) and I trust FX (saying FX/FXX are merely well-programmed channels is like saying Michael Phelps is a fairly decent swimmer) and 98% of my favourite TV shows are entertaining half hours that don’t feel the need to call themselves “comedies”. I can’t wait to find out more.