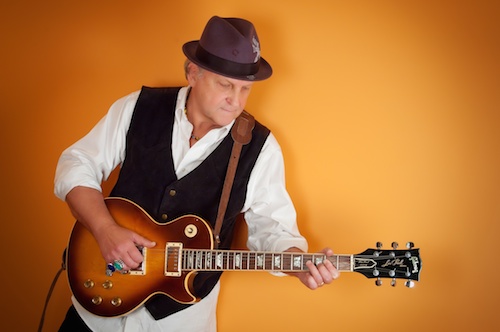 DownTown Mystic is the alter ego of songwriter Robert Allen, a New Jersey native with a penchant for rock in the classic –aka Americana/roots rock – vein. Rock ‘N’ Roll Romantic is the follow up to 2010’s well received Standing Still and 2013’s eponymous release, DownTown Mystic. The latter spent 10 months on the US Americana Radio Charts, with the single “Way To Know” going to #1 on the Roots Music Report Alt/Rock Song Chart.

“Classic rock” is well worn territory, but the release has a nice sense of energy, full of upbeat guitar driven pop rock. The tracks are characterized by DownTown’s melodic vocals with harmonies to flesh it out.

“And You Know Why” is a stand out track with a slower, bluesy vibe overlaid with a plaintive melody and lush harmonies on the chorus. It’s been the breakout tune on the album with over 52K plays on Soundcloud.

The lyrics cover the usual territory of love and life, with some detour. “Brian Jones” is an ode to the Rolling Stone who died too young. Amid the song tracks, there’s an oddity in “Gongs of Karma” which consists of… gongs.

There are some interesting chord changes and rhythmic complexity to flesh out the groove. “She Said She Said” has a Beatles-esque sense of melody and harmony. “Believe In Nothing” is a melodic track with a nihilistic message. He makes good use of the standard guitar-bass-drums instrumentation with a nicely layered texture.

Now I believe in nothing

And it’s not so bad

Cause nothing’s going to save me in the end…

In rockers like “Turn Around And Go” and the bluesy “Brian Jones”, the vocals take on a harder edge. “Think a Little Louder” is another notable track; a straight ahead rocker with a great sense of momentum and energy.

Allen has surrounded himself with the right musicians for the music, joined on the release by drummer Steve Holley (Paul McCartney/Wings/Elton John/Ian Hunter,) Paul Page (Dion/Ian Hunter) on bass, and on rhythm section Garry Tallent and Max Weinberg of Bruce Springsteen’s E Street Band.

You can also hear DownTown Mystic’s music on movies and TV Shows like American Pickers on the History Channel, as well as shows on MTV, USA, CNN, Discovery, National Geographic, and more.

The production is clean without being obtrusive or deadening the music. If you enjoy radio friendly rock that’s a cut above the usual, this release should please the ears.