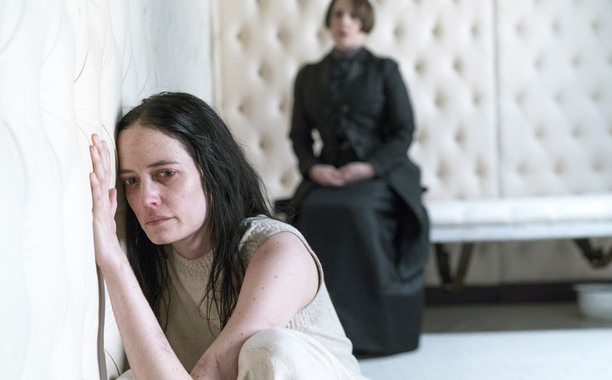 Penny Dreadful: A Blade of Grass vs the World

In the past two weeks, Penny Dreadful had one of its strongest episodes to date, and one of its weakest ones. “A Blade of Grass” was pure artistry, while “This World is Our Hell” was, well…not. To be fair, “A Blade of Grass” set the bar so high, whatever followed was almost sure to disappoint. Still, “This World is Our Hell” felt weaker than usual Penny Dreadful fare. (Some spoilers ahead).

“A Blade of Grass” was a flashback bottle-episode, and featured only three actors from the show’s extensive ensemble. It sounds like a risky venture, but wow was it worth it. Vanessa was put under hypnosis by Dr. Seward, and recalled her time at Dr. Banning’s clinic from several years ago. “A Blade of Grass” took place exclusively (minus maybe a minute or two at the very end of the episode) in a padded cell. Vanessa had to revisit one of the lowest points of her life, when she endured torturous “treatments” for nonexistent delusions.

The episode traced her relationship with the nameless Orderly – or John Clare in his first life. John and Vanessa’s unexpected friendship in Season 2 was always a delight to watch. Finding out that they had met before was bittersweet, since neither of them remembered it. Dying then being resurrected (John) and having a hole drilled into your head (Vanessa) apparently does things to one’s memory. But the fact that they formed an unlikely friendship in the mental asylum, and somehow found each other again years later seems proof that they are kindred spirits. It’ll be interesting to see what happens next in their relationship when they inevitably find each other again.

This episode killed with its kindness. Vanessa initially viewed the Orderly with hostile suspicion, while he treated her with detached professionalism. After the Orderly showed Vanessa a few small acts of kindness, they began to trust, understand, and love each other. There were some supernatural elements, but mostly the episode was about two people connecting under terrible circumstances. Eva Green gave an incredibly fearless performance. And Rory Kinnear remains a criminally underrated actor. Not only did he give a moving turn as the Orderly, but he was convincing and scary as both Lucifer and Dracula, who manifested themselves in the Orderly’s form.

Patti LuPone’s Dr. Seward occasionally popped in as she tried to guide Vanessa through her trance. LuPone can only ever enhance whatever she’s in. Dr. Seward promised to stay with Vanessa no matter what. It was a far cry from their first meetings, when Dr. Seward maintained a careful distance. This episode showed how in spite of the horrors that follow her everywhere, Vanessa has been able to cultivate beautiful friendships. Friendships that will hopefully provide a ray of hope later when she faces off against the forces of evil.

“This World is Our Hell” was less impressive. It mostly centered Ethan, and the various people tracking him. Victor was briefly in it, but his storyline was about him sticking giant electrically charged needles in people’s eyeballs, so I’m pretending it didn’t happen. “This World is Our Hell” felt incredibly rushed. It delved into some of Ethan’s backstory, and it’s a shame that it wasn’t given the same thoughtfully paced treatment as Vanessa’s.

Since the show’s beginning, Ethan has been a man with a troubled past, who struggles to control his violent urges. In this episode, he threw away all that work, and sided with Hecate, although just a few episodes ago he made it clear that he hated her. He suddenly (and dramatically) declared to Hecate, “I’m done trying to be good.” Which seemed an unnecessary declaration, considering he gave Hecate the okay to massacre the lawmen pursuing them just a few scenes prior.

The most frustrating thing about this sudden decision to go Team Evil is that there doesn’t seem to be a particularly good reason for it. Ethan has not trusted Hecate from their very first meeting, so it’s weird how suddenly her arguments click with him. Some of this can be attributed to the emotional turmoil he must feel over seeing his father again, but that’s not convincing enough for that to be the only reason.

Ethan and Hecate bonded over hating their parents, who both volunteered them for service. Hecate’s mother, Evelyn (RIP) offered her up to Lucifer, and Ethan’s father, Jared signed him up for the army. Not exactly the same. I still have to wonder if there is more to Ethan’s hate for his father. He told Hecate he wanted to join the army to make his father proud, so it seems even though Jared is a racist, unpleasant man, young Ethan still cared about him to some degree. Maybe once Ethan committed atrocities in his army service, he became disillusioned, but there could be something else behind his violent hatred. At least we finally know why Ethan hates Kaetenay, and understand why Jared is angry with Ethan.

Despite all the bad blood between Ethan and his father, his father is determined that Ethan stay at the Talbot estate. Good. Keep him. In “A Blade of Grass”, an emotionally, physically, and mentally drained Vanessa stared Dracula and the Devil in the eye and told them to bring it, deciding to fight instead of succumbing to their seductions. Ethan wandered around the desert, tried half-heartedly to be a good guy, then decided screw it, he was going to sleep with Hecate instead. He is clearly the weak link at the moment. So Ethan can stay at Talbot Ranch until he gets it together, or his actions are better explained.

Ethan really should have given more thought before literally and figuratively jumping into bed with Hecate. Despite his claims to the contrary, Ethan hasn’t completely succumbed to the dark side. Hecate on the other hand is very open about enjoying murder. And if that doesn’t give Ethan pause, then maybe he should consider she’s not that powerful. Sure, summoning a nest of rattlesnakes to kill their enemies was useful. But you know what’s even better than a bunch of rattlesnakes when you’re in the middle of the desert? Water. Water is so much more useful than rattlesnakes. Seriously, I know Hecate thinks she’s qualified to rule over the darkness with Ethan, but witch, please. If her magic couldn’t stop her and Ethan from nearly dying of thirst, then what is even the point? They were only saved because other people showed up to help them.

Ultimately, Ethan’s storyline suffers from being rushed. His turn to the dark side happened very quickly, especially since it was preceded by two and a half seasons of him resisting it. There wasn’t a proportionate catalyst that made his switch believable. “This World is Our Hell” wasn’t a bad episode, but it just wasn’t nearly as good as “A Blade of Grass”. It didn’t use its allotted time nearly as effectively. The next episode’s challenge is to fill in the blanks this episode missed. Not every episode can be “A Blade of Grass”, but let’s hope the rest of the season is stronger than “This World is Our Hell”.