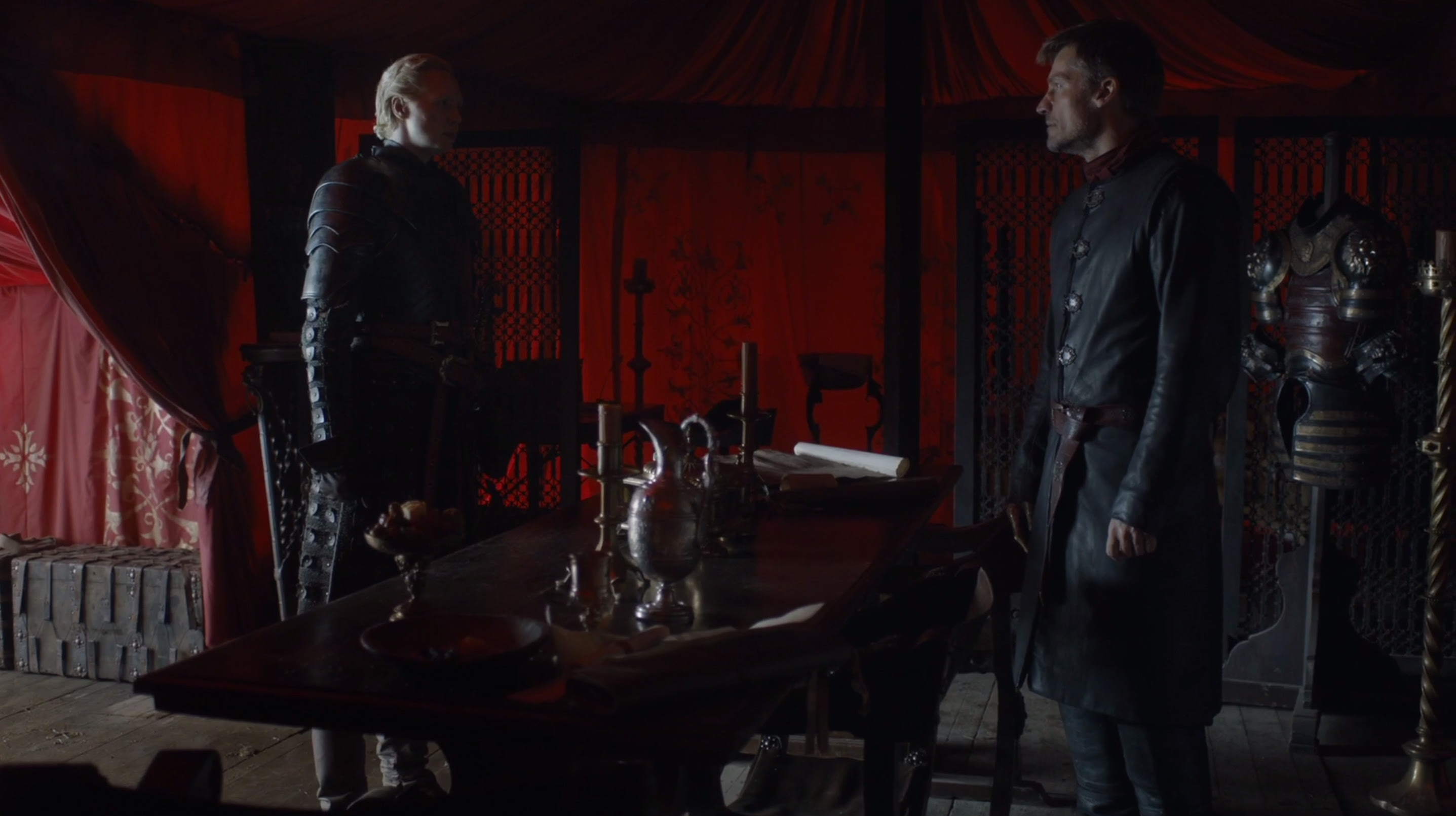 Game of Thrones: The Ethics of the Game

This is a story about honor. A man marries a woman from a powerful family. That man’s wealth and status rise significantly as a result, and places him among a different bracket of rivals, rivals with just as much power if not more. He tries to live a good and true life, but in the course of doing so he gets in the way of another, more powerful, less honorable man’s scheme. The schemer calls this man traitor and demands the king’s justice. Bound by the laws of the land, he cannot rightfully defend himself nor seek the truth from his accuser without shedding blood or breaking an oath. He dies, driving his house to ruin and his widow to madness and grief.

This is a story about vengeance. A man kills another man, on purpose or by accident. That man’s family and bannermen swear to avenge him. However, the murderer in question is nowhere to be found, or at least not within their reach. So they attack his vassals, who repel them fiercely and seek aid from the king. Being the early days of a feud, the king dispatches troops and names noblemen to command the forces to restore peace. However, some of the noblemen side with opposing families in the feud, and rather than commit forces to their given orders, they aid and supply the factions. The guilty man, meanwhile, remains nowhere to be found, and after much bloodshed, miscommunication and treachery, emerges as king of the realm.

These two are not the same story. This is observed just by reading the events as they have occurred. But these two stories only stand out in the reading. When they are history, they are flat, mired in the page. When they are lived, acted out, portrayed on the grand old stage of life, they become harder to tell apart. A story about honor may incorporate a story about vengeance. Certainly, all stories about vengeance may begin with honorable intentions, but they always end in the same bad blood. Vengeance and honor get mixed up by people in all stations of life, high or low. To some, the war to reclaim a lost love or family member is a cause more worthy than the war to liberate the oppressed. To others, the claim of family is stronger than the claim of fealty. And so, in the great dramas in the world, there is honorable vengeance, vengeful honor, vengeance made for dishonorable behavior, honor reclaimed by vengeance, honor for honor’s sake, vengeance for vengeance’s sake, the good, the bad and everything in between.

In Game of Thrones, the entirety of the drama flies back and forth between these twin poles of honor and vengeance. Ned Stark as an honorable man, Cersei Lannister as a vengeful queen. Tyrion Lannister as a dishonorable man that the audience honors, pushed into vengeance-seeking behaviors by the prodding of the plot. Yet as the show has progressed, the ground between the poles has grown muddy. It gets tangled before our eyes, the betrayals, the secret alliances, the shadowy figures and the rousing speeches. We watch honorable men fall and vengeful men rise. Kings come and go, generations pass into death and their codes, their traditions with them, and the younger generation either flounders at the bottom or preys on the weak. These are the ethics of the game, the rules by which the show operates, and yet they are not rules. Daenerys Targaryen is entirely honorable (in the eyes of Varys and Tyrion, probably the best and worst judges of character in the series) and entirely vengeful, creating this bizarre, hyper-good protagonist that burns her opponents with dragonfire. Bran and Benjen Stark are just trying to save the world from White Walkers, no matter the politics of their family or the people who murdered their family. The entirety of the continent of Essos could care less about who has honor and how vengeance is served. There are whole worlds outside these rules, existences without honor and vengeance. But like the poor, pacifist villagers in the previous episode, they are temporary existences, lives that make smaller ripples in the span of things.

Our concern, of course, is with the big things. As lovers of Game of Thrones, we are lovers of history by proxy, lovers of the real human emotions that drive us forward to the Iron Throne, force us up Littlefinger’s ladder of chaos, or plunge us down into the dishonor of kinslaying, treason or blood magic. Watching ethics and emotions churn is one of the chief pleasures of this series. In last night’s episode, “No One,” we watched Arya refuse to kill Jaqen, despite him not being so generous a few days ago. Sure, she didn’t kill the Thin Man, nor did she kill Lady Crane, or the Hound. But with Jaqen, things are a little different. This is the man responsible for freeing her from Harrenhall. This man gave her the Golden Ticket to Braavos. This man taught her more about life, death and the business of killing than any other “teacher” she’s had. All of that conflict in her face, all of that judgement to pass, and it zips through her in the few minutes they have at the end of “No One.”

But there would be no vengeance nor honor in Jaqen’s death. Certainly, we get our fair share of both between the Hound and the Brotherhood. Having tracked down the murderers from “The Broken Man,” both lay a claim to killing rights. For the Brotherhood, it’s a matter of honor. Beric Dondarrion says they dragged our good name through the dirt. For the Hound it’s a simple bit of revenge: “He killed my friend.” Vengeance claims two of the three, setting the tone for the show–more deaths from vengeance than honorable slayings.

Honor takes the spotlight at Riverrun. Jaime doesn’t care about anything except getting back to Cersei, which he makes abundantly clear in his “negotiation” with Edmure Tully. Certainly none of the Frey lords at the siege are overly concerned with the notion of honor, and as for Bronn, well…his demonstration of “fighting styles” speaks for that. But Brienne is swallowed up in honor, in this need to serve and to serve loyally. She tells Jaime that she must side with his enemy if it comes to battle, despite their history, despite the torrent of feeling between the two of them. Certainly Jaime doesn’t love her (no matter what the Internet would have you think), but there is emotion, there is a bond that they share (when you fight off a bear with someone, the two of you pretty much become besties). Honor is mixed up with love (“torrent of feeling”) between them, but for the Blackfish, for Brynden Tully, honor is home. He has not given up the fight the North started. The old warrior is itching for a fight, daring the men outside his door to lay on with their siege. His dialogue makes a point of mentioning often and loudly that a man who breaks oaths like the Kingslayer does cannot be trusted. His honor is so strong, so stubborn, it prevents him from surrendering, from fleeing, from anything but fighting.

And he loses. The Blackfish is killed, which, it could be argued, was what he wanted to do in the first place. But the Lord of Riverrun opens the gates to the enemy and all thought of battle falls away. True, his “distraction” sort of lets Brienne and Podrick escape (although it was Jaime who really let her go), but honor loses the day. It’s almost sad, that the only people who get what they want out of this whole mess are the Freys and the Lannisters. Brienne fails to recruit more fighters for Sansa’s army, the Blackfish fails to spend two years in a glorious siege and Edmure Tully fails to pass off as anything but a coward.

It’s a strange thing, that honor comprises some of the most interesting part of the series, that the majority of what we love about the plot of Game of Thrones comes from conflicts surrounded by honor, and yet it’s honor that loses the fights. We observe the vengeances and we are incensed, satisfied or shocked (more so when we discover the truth around some “accidents”), whether the actual violence is honorable or not. But we love our dishonorable characters so. It’s why Bronn won the trial by combat in the Vale, not Sir Vardis Egen. It’s why Arya is such a fascinating character in the first season, a highborn girl filthy and constantly fighting. It’s why Ned Stark dies, why Jon Arryn died, why all the good and true folk of Westeros have come under the knife. True, honor provides us with drama, with great moments on the stage. But it’s the lowest we love, the pettiness we crave, the taste of blood we get from vengeance that keeps us coming back.