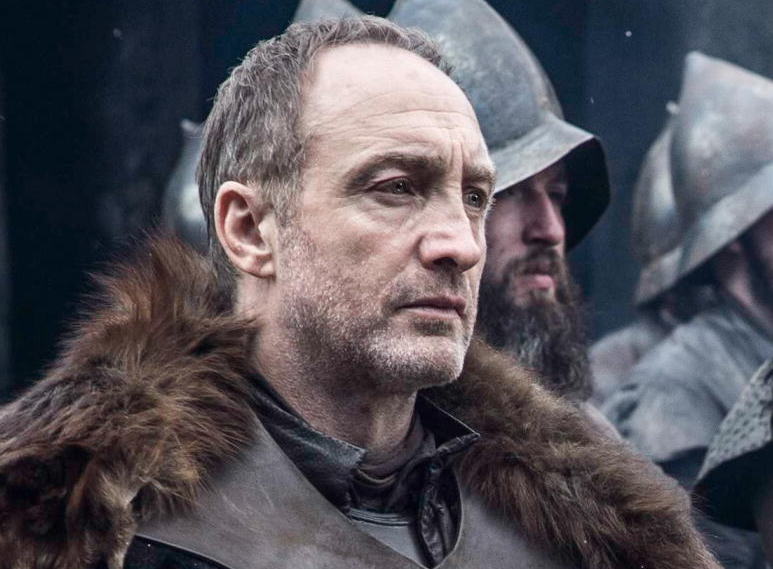 Game of Thrones: The Warden of the North

First they killed Stannis the Mannis, and now Spruce Bolton.

I don’t think I loved a ‘bad guy’ on Game of Thrones more than I loved Roose Bolton. Tywin was the classic silver fox with a twist of Bond villain, but his appeal was more in his acting and charisma than his villainy. Viserys wasn’t so much an evil character as he was a misguided teenager with family troubles. Even the baddest of the bad, the unilaterally human-hating White Walkers are voiceless, nameless monsters who don’t have much to lend the show besides the potentially world-ending threat they represent.

From minute one, when Roose was in the picture my curiosity was piqued. Here was a man who stood by the King in the North, yet seemed to match none of his ideals, share none of his interests. Where Robb was compassionate, Roose was dispassionate. Where Roose wanted to push forward, Robb wanted to secure his keepings. Robb was a Stark through and through, with a Stark’s sense of justice, the simple truth of the execution block. Roose came from a tradition of flaying his enemies, a tradition that the Starks outlawed. Of course we know now that the Bolton’s are ruthless opportunists, and that Roose was simply siding with the biggest, baddest army around. That, and he enjoyed keeping all of his fingers, unlike the unlucky Greatjon Umber.

For a time, Roose felt very much like the Tywin of the north. He was calculating, making and breaking alliances with great delicacy and consideration. He was plagued by distressing behavior of his children (well, bastard child, but you get the idea). Roose and Tywin even had the same basic message about marriage and sex: marrying houses unites the kingdom, and producing an heir is what legitimizes that unification. Anything else is extraneous. Everything I loved about Tywin – the smooth diction, the casual savagery, the unflinching dedication to his ideals – was reflected in Roose, but in newer, darker ways. Tywin’s smile was threatening. Roose’s froze your blood. Tywin’s anger was loud, and dramatic. Roose’s anger was cold, simple and ended with a knife.

It’s important, too, to note that Roose held the position of Warden of the North, a job that only one other person on the show ever held. Ned Stark, the man everyone hates to love and the most principled man on Game of Thrones, held sway and lordship over the cold reaches of Westeros. After the events of the Red Wedding, the power passed to the lord of the Dreadfort, and while he may not have shared Ned’s principles, his views on the north were no less. “The North is larger than the other six kingdoms combined. And I am the Warden of the North.” Those were his words the day he legitimized the bastard Ramsay, the day he cemented his dominion. What the Starks held out of fealty, Bolton would rule out of fear. Roose had gambled in the slaying of Robb Stark, in the betrayal of the North, but in the end he gained the North. And it’s clear from the way he ruled that his intent was not personal, not self-satisfying. That’s Ramsay’s way, to break people for sport, to force his will upon the land. Roose wanted what Tywin wanted – to establish a dynasty, a new dynasty in the North. Not like the Targaryens, all fire and blood. Not like the Lannisters, on wide fields of battle. A true kingdom of the North, one ruled by men of resolve and steely natures. In that way, Roose was almost on the same footing as Ned.

As Roose gambled with his position in the North when he stabbed Robb, he did so doubly by wedding Sansa to Ramsay. Cersei’s prize, Joffrey’s plaything, the red-haired ward of King’s Landing and heir to Winterfell, was trundled back to her home with a more complicated political purpose in mind. Certainly, whatever long game Petyr Baelish is playing has yet to be determined, but Roose’s part was clear. Sansa is the key to the north, and as such belongs in the north. But to whom she belongs is a matter of perspective. If the North truly holds fealty to the Iron Throne, then Sansa would have to have been returned at once. Roose made it clear, time and again, that his alliance with the Lannisters was not as solid as he made it appear. And yet, Sansa does not make the voyage south. She remains in Winterfell, another plaything for Ramsay, and a powerful asset for Roose. United under the Starks, the North challenged the throne. If it could be united again, well…Roose turned aside Stannis’s army with some burned wagons. Imagine what he could do with the entire North.

And as Roose gambles, so, sadly, does his son and heir, Ramsay. The former bastard, sadistic princeling is just as conniving as the father, and it’s clear that Roose’s death has been a long time coming. Ramsay is passionate, but killing his father is not a crime of passion. As he told Theon, “my father told me, aim for the head!” So he does. The young Lord Karstark set the stage, asking for new blood in the north, and Ramsay spills it. It’s a desperate gamble – securing the lordship over the North, killing his stepmother and brother – but it involves a lot more than a family coup. Ramsay has now heaped upon himself all the troubles and ploys that Roose has woven. He must now contend with an angry Lannister empire in the south, a vengeful Ironborn fleet in the east, and the last remnants of the Stark family to his north. I can’t imagine an exceptionally good time to kill your father, but it seems that Ramsay may have picked the worst possible moment to make his move.

As for Roose, I think the thing I will miss most about him is the way other characters reacted to him. In a show that has so many emotions, it is a thing of wonder to have a character so dry, so emotionally unreadable. Roose Bolton did for the North what Oberyn Martell did for the south. He challenges those in authority, not by questioning them, but by his sheer presence. Where Oberyn was a whirlwind of sex and death, Roose was as silent as the graves he filled, a competent killer, a man who inspired fear and terror without raising his voice. No other power in the south came close to challenging the Lannister-Tyrell alliance save the Martells, and no one but the Boltons could have taken the north from the Ironborn. His presence on the show, not his words but his sheer appearance, marked the drama, heightened the tension, raised the stakes in a way few other characters achieved. While House Bolton’s words leave much to be desired (‘our blades are sharp’), Roose’s personal motto still gives me chills, especially knowing that Ramsay has taken it to heart.

“A naked man has few secrets, but a flayed man has none.”